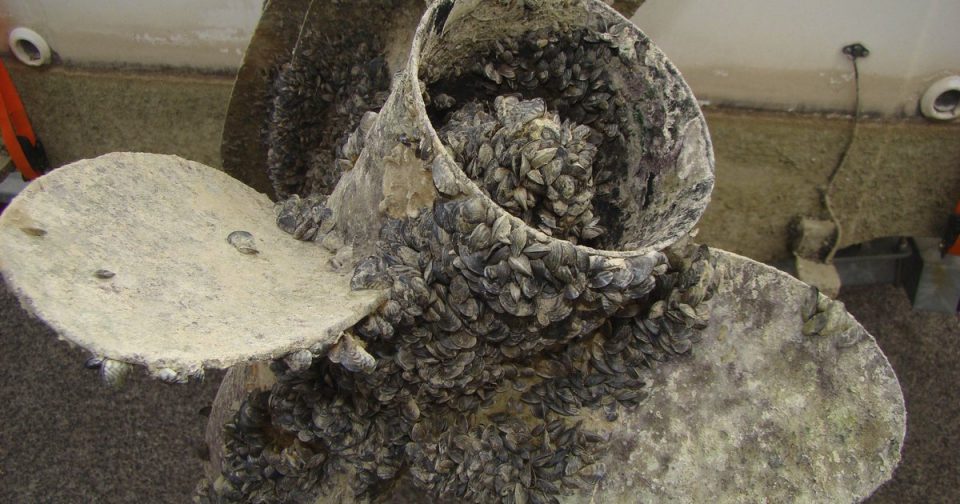 Invasive zebra and quagga mussels are an immediate threat to Western states. With no controls, they spread rapidly, foul boats and equipment, clog water intake, and increase costs to hydropower operations and municipal water utilities. Even dead mussels can be a nuisance, littering beaches with shells. Management of these invaders is expensive; in the Great Lakes, managing mussels costs about $500 million annually.

Until 2007, the mussels were limited to waterways and lakes east of the Mississippi, but now they have spread westward. In 2016, quagga mussels were found in Lake Powell. Today, all craft using Lake Powell must follow a “clean, drain, and dry” procedure recommended by the Federal Aquatic Nuisance Species Task Force to stem the spread of juvenile mussels to other waterways.

Unfortunately, there are no foolproof existing technologies or treatments to eradicate established mussel populations in large, open water systems in an environmentally sound manner. Early warning, however, helps us prepare before the mussels or other invasive species arrive.The Trump administration is seeking to efficiently combat these invaders using genetic tools for early detection. One promising tool is environmental DNA, or “eDNA.” Every organism leaves behind trace DNA from skin cells, waste, or other biological material that can be captured in water samples and identified in laboratory tests.

Careful eDNA monitoring can detect the presence of a species or its genetic material upstream, allowing us to see where the species may be heading before they arrive — an invasive species “early warning” system. This allows resource managers to act quickly to verify the species’ presence and respond before the invaders are firmly established, saving time and money.

There are some limitations, however. Genetic material can show up far from the animal source, travel on fishing gear, or be imported by a predator. Despite its limitations, eDNA is an important tool to accurately identify traces of invasive species that potentially threaten aquatic environments as early as possible.

The U.S. Geological Survey (USGS) is a leader in developing and refining eDNA techniques. Our scientists are improving sample collection methods, detection limits, processing speeds, and more. We are piloting the sharing of eDNA information using our Nonindigenous Aquatic Species Database, and USGS scientists have developed portable eDNA kits that can test bait buckets, so anglers do not accidentally spread invasive species. We are also assessing the feasibility of adding automated eDNA sampling, where possible, into the USGS network of water gaging stations.

Improving technological capabilities helps us rapidly and accurately detect, assess, and communicate the threat of invasive species. The objective is to get the technology out of the lab and into the field and automate reconnaissance. We have broken ground on a new, state-of-the-art eDNA laboratory that will boost our capacity throughout the Northwest and across the nation.

We are proud to work with Utah wildlife officials to incorporate reliable, cost-effective eDNA testing into the state’s invasive species management effort. With the assistance of all Utahns, we hope to help prevent the spread and eventually control quagga and zebra mussels in the state and take those lessons to the rest of our country.

Beyond these mussels, invasive species nationwide are a $120 billion problem. The Trump administration has made significant investments in science and technology to help state and local partners more effectively manage invasive species and diseases. These efforts help protect water supplies, hunting and fishing industries, energy production, America’s agriculture and native species. The Department of the Interior is investing an estimated $143 million in fiscal 2020 — roughly $42 million more than fiscal 2016 — to manage invasive species and develop critical technology like eDNA.

Jim Reilly is director of the U.S. Geological Survey.