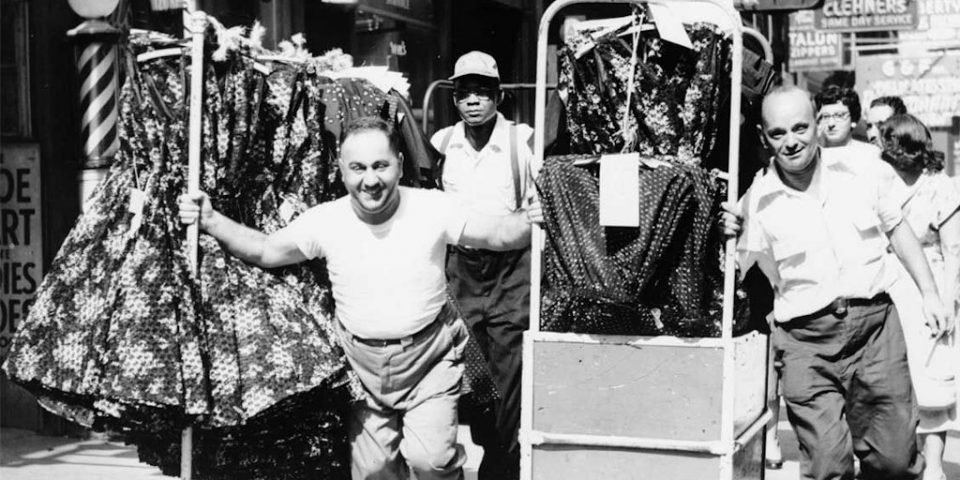 How and why Jews thrived in the garment industry.

When you think of Jewish enterprise in America, you might be picturing Jewish contributions to various geographic areas, such as Wall Street, Tin Pan Alley, Broadway, or Hollywood, all of which featured major Jewish involvement in finance, song, theater and cinema. Take away Jewish involvement in those arenas, and the worlds of finance and entertainment are the poorer for it. Okay, they’re deserts. Our contributions are way out of proportion to the percentage of America’s population we make up. Let’s all pause for a moment and give ourselves a well-deserved pat on the back. Heck, go ahead and do a second pat.

But before acquiring our reputation for contributing to any of those iconic places and fields of endeavor, Jews made their major mark on Chatham Street, the center of the shmatte (clothing, but literally “rag”) business, in New York City. Though the Lower East Side of New York City became, in effect, “Shmatte Central”, smaller shmatte centers arose simultaneously in Chicago’s West End and Jewish ghettos in Philadelphia and Boston. A close relationship developed between Jews and the clothing trade, as stitching and selling garments had long been a natural fit. Why? Perhaps because Jews have been expelled from so many countries, they often left with little more than the clothing on their backs, so clothing became very special. In fact, the relationship between Jews and garments has lasted for two centuries, going through numerous transformations along the way.

Even as far back as 1905, the year “Fiddler on the Roof” was set, a major character was Motel Kamzoil an impoverished tailor secretly pledged to Tzeitel, Motel gathers the courage to ask Tevye for her hand in marriage. He feels “even a poor tailor is entitled to some happiness.” They marry and start a family, which also includes the “new arrival” of a sewing machine.

Of course, at first, Jews were much more likely to sell clothing than to create and produce it. In the mid-19th century, many thousands of Central European Jewish immigrants took to peddling shmattes like a shmear takes to a bagel.

Starting out on their feet with packs and bundles of clothing and fabric, these hopeful immigrants eventually settled down and opened stores throughout America’s cities, towns and villages. Along the way, they thrived by helping to stitch uniforms for the Union Army during the Civil War. By the end of the 19th century, Jewish-owned stores became standouts in American retailing: Rich’s, in Atlanta; Filene’s, in Boston; Macy’s, in New York; Gimbels, in Milwaukee; Kaufmann’s, in Pittsburgh; and Neiman Marcus, in Dallas.

Jewish wholesalers and manufacturers, suddenly in great demand, were able to offer plenty of garment work to the Jews fleeing Eastern Europe for the promise of America. Jewish needle workers sewed the clothing. Jewish contractors ran the workshops. The workshops competed for orders placed by Jewish wholesalers. And the end product would be sold to Jewish retailers. It became a regular Shmatte Circle of Life, so to speak.

By 1910, Jews made up 39% of the garment district workers in New York City, and 25% of the garment workforce nationwide. But the working conditions left much to be desired. In his 1651 poem, Leviathan, Thomas Hobbes described the life of mankind in a state of war as, “solitary, poore, nasty, brutish, and short.” He may as well have been describing life in New York’s sweatshops and workshops at the turn of the century. The work was difficult, unpleasant, and poorly paid. But it was work and it was steady, for as long as you could stand it.

It could also be quite dangerous. The notorious Triangle Shirtwaist Factory fire in 1911 was one of the city’s worst industrial disasters. The fire caused the deaths of 146 garment workers – 123 women and girls and 23 men – who died from the fire, smoke inhalation, or falling or jumping to their deaths. Most of the victims were recent Italian and Jewish immigrant women and girls aged 14 to 23. Because the doors to the stairwells and exits were locked (a then-common practice to prevent workers from taking unauthorized breaks and to reduce theft), many of the workers who could not escape from the burning building jumped from the high windows. But something positive came of it. The fire led to legislation requiring improved factory safety standards and helped spur the growth of the International Ladies’ Garment Workers’ Union (ILGWU), which fought for better working conditions for sweatshop workers.

Notably, the garment industry’s miserable working conditions resulted in two important occurrences: labor activism and leaving the sweatshops to enter other fields of endeavor. Of course, many of these other occupations were dead set against hiring Jews. But the Jews were able to make inroads in some of the newer, consumer-oriented fields such as film and music. As a result, a number of Hollywood tycoons and sheet music publishing giants began as clothing salesmen in the Chatham Street area. One example is Morris Brill, whose famed Brill Building provided a home to songwriting teams such as Gerry Goffin and Carole King, Barry Mann and Cynthia Weil, Jeff Barry and Ellie Greenwich, and Doc Pomus and Mort Shuman. But its origin was the clothing store Morris ran on the building’s ground floor.

And those Jews who stayed and thrived in the shmatte business? They became entrepreneurs and designers, such as Ralph Lauren (born Ralph Lifshitz), Jacobi Press of J. Press, and Barney and Fred Pressman of Barneys. As for even more evidence of Jews who’ve done well in clothing and fashion, allow me to call these to your attention: Levi Strauss, Diane Van Furstenburg, Kenneth Cole, Rudi Gernreich, Marc Jacobs, Donna Karan, Calvin Klein, Michael Kors, Isaac Mizrahi, and Paul Marciano.

It’s been quite a journey, but as with so many other professional fields, Jews have made their mark and continue to innovate and thrive. And that’s a long way from peddling shmattes on Chatham Street.

For more, check out:

‘Schmatta: Rags to Riches to Rags,’ documentary on HBO, shows how U.S. outgrew its garment industry

Drive Thru Food Distribution in Rockledge Set for Friday, Sept. 11