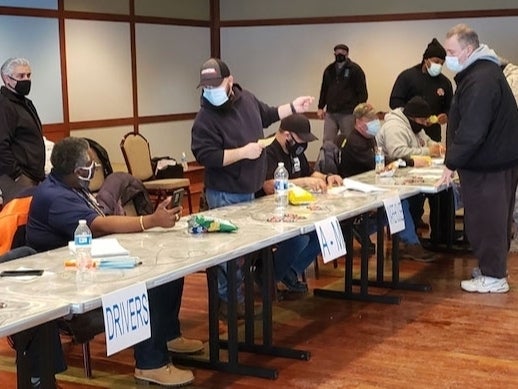 FRANKLIN PARK, IL — By a near unanimous vote members of Teamsters Local 710, which represents warehouse employees and delivery drivers for Jewel Osco, authorized a strike vote last Friday. The current contract is set to expire at 11:59 p.m. March 6.

A bargaining session on Feb. 18 was described by the union’s negotiating team as “abysmal.” Approximately 98 percent of members from Jewel’s transportation and warehouse units voted in favor of authorizing a strike if necessary. Jewel is owned by Albertsons, the second-largest grocery chain in the country. The union maintains that Albertsons pulled in $50 billion in revenue in 2020.

“We have told the employer over and over that our committee works under the full direction of the rank-and-file membership, and the weight and importance of that seems to fall on deaf ears,” said Secretary-Treasurer Mike Cales in a statement. “Our committee is fed up. Our members are fed up. This company needs to come to their senses and take us seriously, because we’re really running out of time.”

Of 414 votes cast, warehouse workers voted 404 to 10 to authorize a strike, with delivery drivers casting 161 yes votes to 3 no votes if a new contract cannot be hammered out. The vote took place at a hall near the Melrose Park distribution center to allow for social distancing.

The union claimed that Jewel has forced most workers to work mandatory six-day weeks throughout the coronavirus pandemic, creating “dangerously crowded conditions in its warehouse,” the Sun-Times reported. Jewel is said to have discontinued pandemic hazard pay in July.

The Teamsters Local also claimed that warehouse employees’ need for overtime increased during the pandemic because of Jewel’s “inability to attract and retain new hires by offering a low starting wage with little room for growth.” Under management’s proposal, the union maintains that workers’ 401k plans would decrease.

Also, due to overtime, union members complained they cannot arrange time to get a COVID-19 vaccination.

“Going on strike is always a last resort, but it’s something we might have to consider,” Cales said. “710 wants a fair and equitable agreement that addresses the egregious issues our members have had to put up with for far too long. A strike may be the only way for the company to finally understand that, and our members have the full support of this local if that’s the route they want to go.”

The overwhelming strike authorization vote gives the Local 710 bargaining committee the power to call a strike at any time. Contract talks will resume Feb. 26.