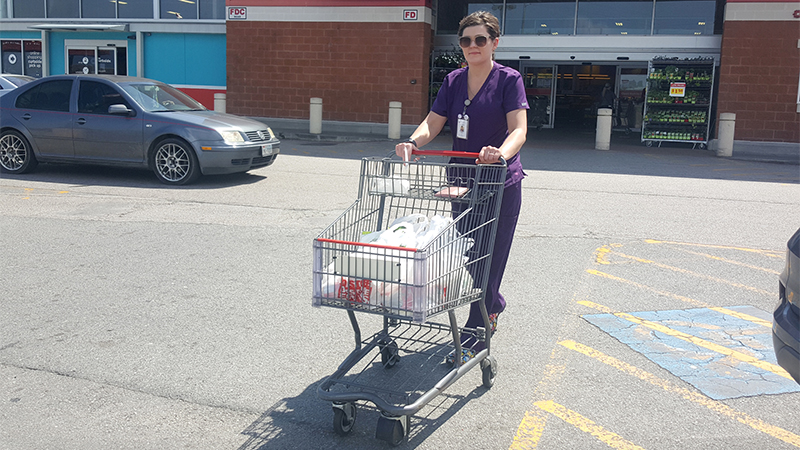 An addendum to the county’s emergency order stating only one member of a household can enter a store or other retail business at a time is aimed at preventing the spread of COVID-19.

The new rules are part of the Stay at Home, Work Safe Initiative instituted by county judges in Hardin, Jefferson, Newton, Orange and Tyler counties and developed as less restrictive addendum to the proposed, more restrictive orders.

Brittany Snider, who was shopping Wednesday at H-E-B in Mid-County, believes the restriction will help.

“As a nurse and a mom I don’t bring my kids with me to the store,” Snider said.

Jefferson County Sheriff Zena Stephens said her deputies will be vigilant, out patrolling and reminding people they see congregating not to do so. She also hopes with this new amendment that storeowners will take count of the number of people entering the business.

Stephens said all of this is new to law enforcement, as well as citizens.

“We will try and remind people and give them warnings initially,” she said, adding action will be taken if they keep getting reports of problems.

JCSO covers 975 square miles and is the only agency that has jurisdiction in municipalities and rural areas. They generally don’t patrol cities because they have their own law enforcement departments but maintain jurisdiction.

Stephens is also responsible for the near 400 employees and 600 inmates at the correctional facility.

“I am trying to keep my facility as sterile as possible,” she said. “We are medically screening everybody who comes through the jail, whether it’s an officer bringing in an offender or an offender, all employees every day.”

On Tuesday, she said there was an offender brought in without fever but had a dry cough. The person was immediately brought to quarantine in a negative pressure isolation cell as they await results of the person’s test.

About 200 non-violent offenders with misdemeanor charges recently saw an expedited hearing where judges set bonds or left on their own personal recognizance.

Criminal justice will still go on, she said.

“We are not letting them out. It’s the same process, sped up and the judges were gracious enough to rotate their dockets so they were in and out quicker,” she said.

“Whether enforcing the new resolution in the community or trying to figure how to keep people in the correctional facility safe, it’s a work in progress,” she said. “I think we’re doing the very best we can. We don’t take it lightly and I think that’s important for people to remember.”

Jefferson County Judge Jeff Branick said the reason for the newest addendum is that most people who have tested positive are people who have traveled, and officials are trying to prevent the community spread of COVID-19 while at the same time trying not to destroy the economy.

“My concern is for single mothers who may work in retail and depend that paycheck to pay rent or they would be homeless if not,” Branick said. “We are trying to walk a tight rope between public health and the economy.”

As of Wednesday there were a total of 10 COVID-19 cases in the 6-county region including seven cases in Beaumont.

IBM (IBM) Gains But Lags Market: What You Should Know