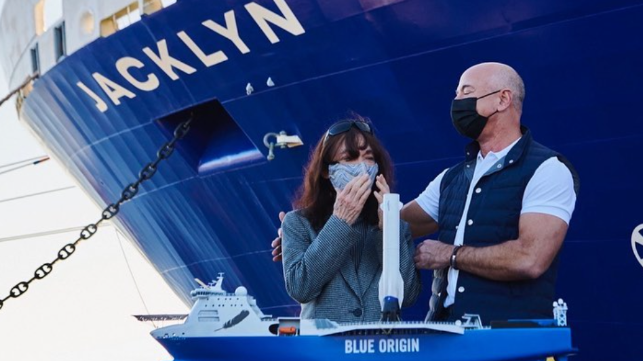 Bezos, the world’s wealthiest person, is developing a rocket launch-and-recovery system comparable to the SpaceX Falcon 9, which is owned by Elon Musk – the world’s second-wealthiest person. Blue Origin battled SpaceX over the patent rights to a landing-at-sea system, but it ultimately withdrew its case in 2015. SpaceX has conducted dozens of at-sea recoveries for its Falcon 9 boosters over the intervening years. This reusable booster arrangement has allowed SpaceX to roughly halve its cost per launch.

Blue Origin has not yet conducted a paid commercial delivery to orbit, but in mid-December, it won a contract from NASA which authorizes it to compete for satellite-launch work with its future New Glenn heavy lift rocket. The contract allows NASA project managers to design satellites around New Glenn’s capabilities. Though its payload capacity is lower than SpaceX’s three-booster Falcon Heavy, New Glenn has a fairing diameter of 23 feet – giving more room for bulky satellites.

Like Falcon 9, New Glenn will launch from Cape Canaveral, Florida on a trajectory out over the Atlantic. After the second stage separates, the first stage will reorient and descend through the atmosphere to land on a moving ship – the Jacklyn. The landing evolution will occur about 500 nm offshore, and it is a core part of the operation’s business plan, which calls for recovering and reusing each first stage at least 25 times.

The landing ship Jacklyn was launched as the Stena Hispanica in 1997, but due to a string of yard issues, she did not enter service until seven years later. She was sold to Blue Origin for conversion in 2018 and has been undergoing a refit process in Pensacola, Florida for the last two years.

“My siblings and I surprised our mom today. We revealed the name of the Blue Origin landing ship. We named it after her – the Jacklyn,” said Bezos in a social media post. “New Glenn’s first stage will come home to the Jacklyn after every flight. It couldn’t be more appropriately named – Mom has always given us the best place and best heart to come home to. We love you, Mom.”

How IoT and Robotics are Evolving to Benefit the Supply Chain

How global shocks are reshaping trade