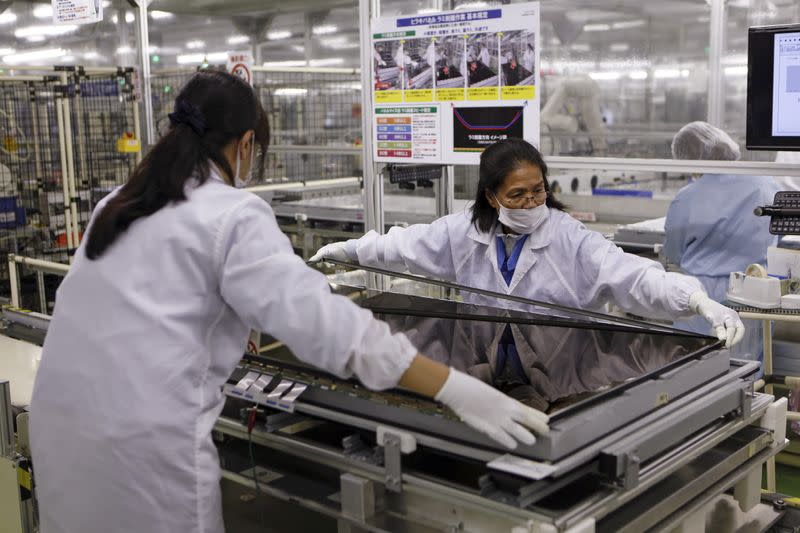 But in a worrying sign, service-sector sentiment turned pessimistic, as firms struggled with the fallout from the coronavirus crisis, according to the poll, which tracks the Bank of Japan’s (BOJ) closely watched tankan quarterly survey.

“The global economy is showing signs of recovery from the impact of the coronavirus pandemic,” a manager at a machinery maker wrote in the poll.

“But the outlook remains uncertain, as our customers are putting off business spending decisions because their budgets are on a declining trend.”

The Reuters Tankan sentiment index for manufacturers rose to 25 from 22 in June, its highest since November 2018, the poll conducted June 30-July 9 showed. The service index fell to minus 3 from a flat reading the prior month. (For a detailed table of the results, click)

The Reuters Tankan index readings are calculated by subtracting the percentage of respondents who say conditions are poor from those who say they are good. A positive reading means optimists outnumber pessimists.

Manufacturers’ sentiment got a boost from strong confidence at car, chemical and metal products makers, which offset negative conditions in the textiles and paper sector.

The poll, which surveyed 503 large- and mid-sized companies of which 257 firms responded on condition of anonymity, comes ahead of the BOJ’s July 15-16 policy meeting.

The BOJ’s own “tankan” business survey out this month also showed business confidence improved to a two-and-half-year high, while service-sector sentiment turned positive for the first time in five quarters.

The BOJ is expected to slash this fiscal year’s economic growth forecasts in fresh quarterly projections as a fresh state of emergency for Tokyo, which will run through to Aug. 22, threatens to hurt consumer and business sentiment.

The Reuters Tankan poll underscored the pain firms, especially those in the service sector, were feeling from the health crisis.

“Overall consumer behaviour is slow, as sentiment isn’t improving due to anti-coronavirus measures,” a manager at a food producer wrote in the survey.

But even as they are taking a hit from prolonged curbs, the Japanese government estimated this month that it expected the economy to return to pre-pandemic levels by the end of this year, largely thanks to solid exports and a boost to consumer spending from progress in vaccinations.

Manufacturers’ business confidence was seen improving further to 28 in October, while that of service-sector firms was expected to rise to 8, a slightly lower forecast for three months out than that of the previous month, the survey showed.

Nabisco factory in Fair Lawn to shut down by the summer