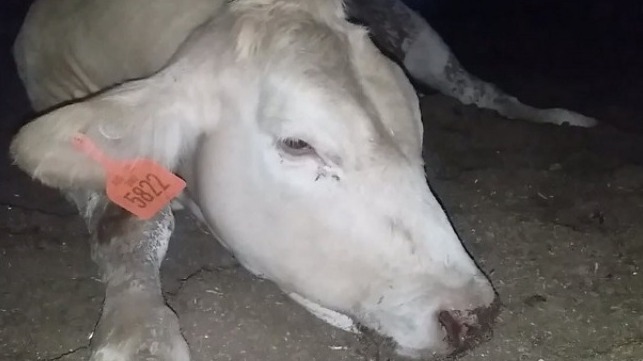 Israel Against Live Shipments and Israel Animal Save have released footage of the arrival of 11,000 head of cattle from Australia. The footage has raised concerns about animal welfare on shipments to the Middle East – and also to Asia.

The livestock depicted arrived at the port of Eilat on the Maysora and were monitored for three days during offloading and transport to quarantine. The groups claim that some animals died, some were blind and many seemed weak. Most were covered in feces.

Warning: Some viewers may find this footage disturbing.

The issue of sending livestock from Australia to the Middle East has been the subject of debate in Australia for decades, and most recently after whistleblower footage was released on “60 Minutes” in April 2018 showing a voyage where thousands of sheep died of heat stress on the Awassi Express (now the Anna Marra).

On-going discussion in Australia has included debate on the appropriateness of using mortality rates as a measure of animal welfare, as they do not account for animals that suffer but survive. However, despite controversy in both Australia and Israel over the trade, live exports to Israel have increased by around three percent over the last year. Short-haul exports from Australia to Asia have also grown.

To reduce animal suffering and improve welfare outcomes, the Australian Veterinary Association, Vets Against Live Export (VALE) and Sentient have maintained that there should be an independent veterinarian on every livestock carrier. Historically, veterinarians were required on voyages over 10 days. However, once the northern Asian market opened up and many voyages exceeded 10 days, this changed. Despite the length and complexity of some of these voyages, none of the voyages to Indonesia, Vietnam or China routinely carry a veterinarian.

The government has consistently ignored veterinary advice on the subject, says Dr. Sue Foster, spokesperson for VALE. “In what was seen as a positive move, the Australian Government at least appointed supposedly independent observers on ships after the Awassi Express disaster and its exposure on ’60 Minutes’,” says Foster. However, VALE’s analysis of the independent observer reports available up to September 2019 indicates that the median voyage length is not longer for voyages to the Middle East than China and that there is actually less cattle mortality on the Middle East voyages.

Foster questions whether this is because there is more often a veterinarian onboard on voyages to the Middle East. In addition to similar long distance transport risks, and insufficient food on around 14 percent of voyages, there have been additional risk factors on some Chinese voyages such as rough seas and typhoons. Chinese voyages also come uniquely with another temperature stress: cold stress. Thus, says Foster, on paper, there is no obvious reason why a veterinarian would be required for Middle East voyages and not for Chinese voyages.

Why does having a veterinarian matter? Foster says: “An accredited stockman has done a four day course. A registered veterinarian has done a five year course. A stockman is not required to understand the intricacies of stock diseases, their clinical presentations or their pathology. It is difficult to know how competent the accredited stockpersons are, but it is very obvious reading the High Mortality Investigation reports that a cause for the high mortality is rarely ascertained on the stockperson-accompanied voyages. This should not be surprising, as they have not studied pathology and have not been trained in necropsy technique.

“Likewise, they have not done any course in pharmacology to understand in detail any drugs required. We have very little information on stock treatment competency or effectiveness, but on at least one voyage (Voyage 61 Bison Express from Townsville to Vietnam), drug doses were clearly incorrect.”

Foster notes that the independent observers are appointed by the Department of Agriculture and the summaries are all written by the Department. She says comparing the actual reports with the summaries shows that the observers have varying knowledge, experience, competence and sympathy and “that the government sanitizes everything. As time has gone on, the reports have become more and more sanitized. Initially it was only the words ‘heat stress’ that were removed, but in time, actual temperature data has also been largely removed.”

VALE, Israel Against Live Shipments and Israel Animal Save have all called for a ban on the live export trade. However, the industry has reaffirmed its commitment to improve animal welfare, and newbuild livestock carriers are planned, albeit not in Australia. Former Wellard CEO Mauro Balzarini has indicated he will launch a new venture focused on developing cleaner, smarter livestock carriers that he says will significantly improve animal welfare and environmental performance. He has relocated to New Zealand to start the venture.

Heat stress: documented for three voyages (information unavailable for many)

Independent Observer Summaries of 15 voyages to the Middle East

Since 1987, Foamation Cheesehead Factory has been helping you show off that Wisconsin pride