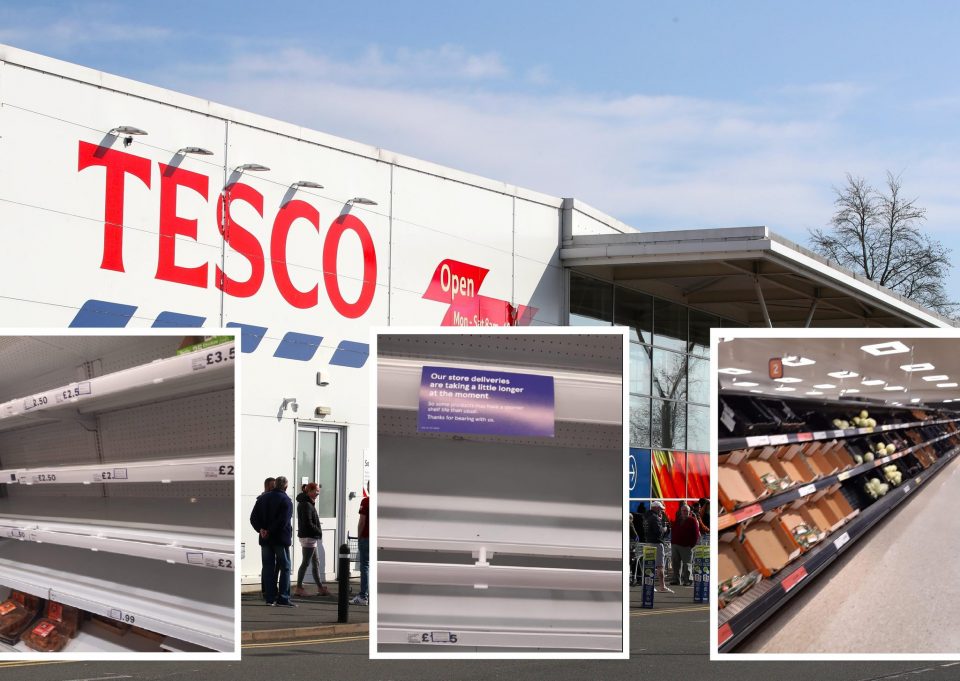 The fiendishly complicated and expensive red tape which now applies to all commercial goods moving from Great Britain to Northern Ireland – which even many freight industry veterans say privately they struggle to understand – has seen a growing number of GB companies simply refuse to supply Northern Ireland.

Despite Secretary of State Brandon Lewis declaring last week that “there is no Irish Sea border”, the new border’s existence is increasingly impacting both on some of the biggest supermarkets, and on some of Northern Ireland’s smallest companies.

The shelves in Tesco’s huge Newtownbreda store were particularly sparse in some sections, with one entire aisle of chilled produce almost empty, despite no evidence of panic-buying.

Among the items missing were many cheeses, most chilled fruit juice, many ready meals, many desserts, many chilled meat products, and many of the chilled and frozen pizzas.

Across scores of items, shelves contained a label saying “temporarily out of stock” and estimated delivery dates ranging from today to Friday, while it was clear that other items will not be returning to shelves at all, with the message “discontinued”.

Former Ulster Unionist leader Mike Nesbitt was among many members of the public to comment on the empty supermarket shelves across Northern Ireland. He said on Monday night that the empty shelves at Tesco’s huge Knocknagoney store on the outskirts of east Belfast were “noticeable”.

Tesco told the News Letter that it had “a good supply of products coming into Northern Ireland” but admitted that “there has been a short delay on certain products”. It said it was working “to get these back on the shelves as quickly as possible and direct customers to alternatives where we can”.

In Sainsbury’s large Forestside store in south east Belfast an entire aisle of vegetables was virtually empty and – as revealed by this newspaper yesterday – hundreds of items are disappearing as they sell out and being replaced on an emergency basis by products sourced locally, including own-brand produce from rival supermarket Spar.

Days after Brexit, many products vanish from Sainsbury’s in Northern Ireland and…

To a lesser extent, there were significant gaps in Marks & Spencer’s Forestside food store and in Lidl’s Castlereagh Road store.

A spokesman for M&S said that they had been well-prepared for Brexit and their stores were “receiving regular deliveries”. Two months ago M&S set up a single “export centre”in Motherwell to handle all of its deliveries to Northern Ireland and the Republic.

Asda said that it had “not experienced any issues in getting Asda lorries across the [Irish Sea] border following the end of Brexit transition period” and so “this isn’t the reason for any availability issues”.

At the other end of the grocery spectrum, small business Causeway Organic supplied about 30 households on the north coast with vegetable boxes – until receiving an unexpected message on Monday.

Owner Jonathan Owens, who said he had spent months nurturing the business, was forced to email his customers on Monday night to say that his importer had told him “there is an extra layer of red tape they were previously unaware of on top of what I’d already gone through involved in bringing the pallet across into NI”.

Last night Mr Owens told the News Letter that he had been forced to suspend his business and would be refunding his customers.

He said: “The impression I got from the people helping me in Belfast to manage orders was the [customs] commodity codes was all that was required to get vegetables through ports.

”Now as I understand it you need a phytosanitary certificate for each and every item on the pallet, which would potentially double the cost of every item.”

Mr Owens said that he was still hopeful that he could find another supplier, but added: “If it just becomes insurmountable, then bluntly that’s the end of the business.”

He expressed derision for the Secretary of State’s public insistence that “there is no border in the Irish Sea”.

He added: “It’s incredibly hard not to be angry. I don’t think people who ushered this in thought it through beyond a bit of flag-waving.”

A message from the Editor:

Thank you for reading this story on our website. While I have your attention, I also have an important request to make of you.

With the coronavirus lockdown having a major impact on many of our advertisers — and consequently the revenue we receive — we are more reliant than ever on you taking out a digital subscription.

Subscribe to newsletter.co.uk and enjoy unlimited access to the best Northern Ireland and UK news and information online and on our app. With a digital subscription, you can read more than 5 articles, see fewer ads, enjoy faster load times, and get access to exclusive newsletters and content. Visit https://www.newsletter.co.uk/subscriptions now to sign up.

Our journalism costs money and we rely on advertising, print and digital revenues to help to support them. By supporting us, we are able to support you in providing trusted, fact-checked content for this website.

Concrete Block and Brick Manufacturing Market to Expand Alongside Advancements in Construction Management and Planning: TMR

TenderEasy, Part of Alpega, Partners With Xeneta to Help Clients Secure the Best Rates for Ocean and Air Freight

Original Cheesehead Factory ramps up as for Packers fans

Noticeably fewer Alaskans were screened for cancer in 2020 than in previous years, their doctors say

5 cool businesses you can buy in Casino