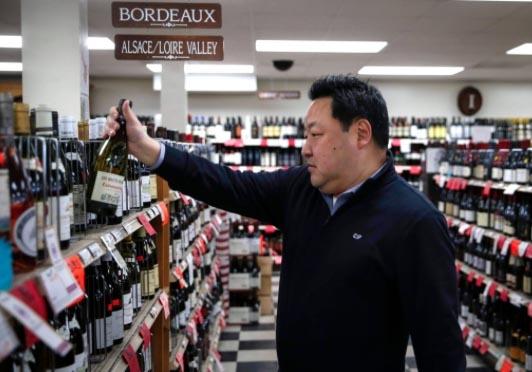 For Iowa wine and cheese lovers, the trade war may be about to cap their Châteauneuf-du-Pape and nix their Neufchâtel.

The Office of the U.S. Trade Representative is deciding whether to impose a 100% tariff on imports of European wines, cheeses and other products — including butter, sausage, olives, olive oil, Scotch whisky, cosmetics, handbags and kitchen items — in retaliation for a dispute over trade and taxation practices by European Union nations.

France, Italy and Spain are the world’s three largest wine producers, and wine makes up by far the greatest share of the affected goods. Ben Jung, owner of the Ingersoll Wine & Spirits stores in Des Moines and West Des Moines, said the tariff has the potential to double the price of his selection of French wines, long a mainstay for the store.

“It’s a really scary situation,” said Jung, whose family founded the business more than two decades ago as a place where customers could find a wide selection of wines, including some unavailable elsewhere in the city.

“These are grim times,” agreed Robert Morey, whose Iowa City-based Best Case Wines distributes European wines across the state to stores like Jung’s and to restaurants like Des Moines’ 801 Chophouse and Eatery A.

The industry already took a blow in October, when the federal government imposed a 25 percent tariff on French champagne and other European products, including scotch. The World Trade Organization gave permission to the Office of the U.S. Trade Representative to levy a tariff in retaliation for what the WTO ruled were unfair subsidies by European Union countries for their Airbus aerospace manufacturing consortium. The subsidies were estimated to have cost competitors in the industry — especially Chicago-based Boeing Co. — $7.5 billion a year.

A few months later, in December, the WTO rejected the EU’s claim it had made adjustments that compensated for the subsidies. The U.S. trade representative responded by saying it would increase the tariff to 100 percent.

At the same time, it proposed extending that tariff to the other goods — including nearly all French wines — to retaliate for a French digital services tax imposed on large web-based companies, especially American firms Google, Facebook and Amazon. Other European Union nations have adopted or are considering a similar tax.

Many Americans, and Iowans, support the Trump administration’s hardball tactics in fighting other countries’ unfair trade practices. But retailers like Jung and distributors like Morey say it could end up hurting domestic businesses like theirs as much as, if not more than, the EU.

Jung said that’s because the burgeoning economies of south Asia, especially China, have a strong appetite for European luxury products, and they are likely to buy up any excess supply if the tariff makes it too expensive for the American market.

He, on the other hand, would have a big hole to fill.

“What am I going to do with an empty French wine section?” he said. “I hope they would reconsider in 60, 90 days. But I can’t leave my shelves empty for that long, hoping something happens.”

But he said he was most worried about his network of niche wine importers and distributors like Best Case — “mom-and-pop” operations that collectively represent thousands of jobs across the country.

“I’m worried about me, too,” said Morey, whose stock in trade is “value wines” offering high quality at reasonable prices — prices that would skyrocket under the tariff.

“It would definitely require me to reassess how I do business,” he said. “The kind of niche I’ve tried to carve out in the marketplace is to find value wines from the Old World that don’t have representation here.”

He handles a few California and Oregon wines, he said. “But to make it as a wholesaler of domestic wines is a much harder row to hoe.”

As a wine retailer before starting his distribution business eight years ago, Morey said, “I have personally known many of the winemakers I’ve worked with 20 years or more.”

A tariff high enough to exclude European wines and other culinary products could be an opportunity for American producers, said C.J. Bienert, co-owner of the Cheese Shop of Des Moines.

“We have great cheesemakers right here in the United States,” he said. “They’re just going to have to be a little more creative.”

But he said there are no possible substitutes for some of the European cheeses, such as England’s Stilton Blue, France’s Roquefort and Italy’s Parmigiano Reggiano.

“We can definitely fill in with other products, but it would be a very sad existence not to have some of these iconic things,” he said.

Likewise, said Jung, a California chardonnay may be made from the same grape as a French Chablis, and an Oregon pinot noir derives from French Burgundy, “but it’s not the same wine.”

And the potential damage done to the network of small retailers who serve fans of both domestic and imported wines could outweigh any advantage to American producers, said Nicole Eilers, marketing director for the Iowa Wine Growers Association.

“We always try to encourage consumers to try something new, like Iowa’s wine,” she said. “But I don’t think of this as something that helps our industry.”

Besides, she said, “It seems kind of crazy that our industry could be hurt by an unrelated issue. I think it’s ridiculous.”

Jung said he found the choice of wine and culinary products as a target for retaliation baffling.

“Why are we being dragged into a war about aircraft parts?” he said. “I’m a little confused about the connection. Why is it mom-and-pops are being conscripted to fight this trade war?”

A comment period on the tariff proposal ended Monday. Morey said he, like Jung and many others in the wine industry, weighed in, and that he also called members of Iowa’s congressional delegation.

Now, all he can do is wait for a decision.

Bill Steiden is the business and investigative editor for the Register. Reach him at [email protected]

Top Marijuana Stocks To Buy Right Now? 3 US Pot Stocks For Your List In July