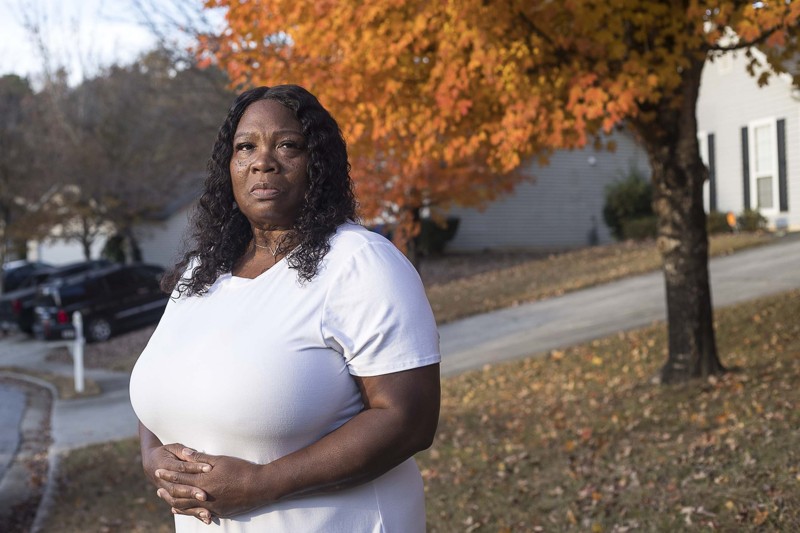 Debbie McGauley considered moving from the house she loved to be the at-home caregiver to her 80-year-old uncle. Its hallways were too narrow for an ambulance stretcher, which the bedridden man would surely need in the years to come.

When a friendly investor offered to buy it for $95,000, she signed a form on his iPad, thinking that she was agreeing to continue discussions, she said. In fact, she had agreed to sell the home for some $25,000 less than what she could have gotten through a real estate broker, according to her attorney and other estimates.

McGauley, 60, had lived in the west Atlanta home for 22 years and owned it free and clear. It is where four generations of her family had gathered for Thanksgiving dinner, and her mother danced all night long on her last Christmas alive. The home was her family’s refuge, and an inexpensive place to live in a region where affordability is growing scarce.

“If they were going to take it, they weren’t going to take it without a fight,” said McGauley, who is disabled. She lives on a social security payments of about $1,040 a month, according to court records.

A growing number of homeowners, often seniors, are being coaxed by real estate investors into selling their homes for far less than what they’re worth, an investigation by Channel 2 Action News and The Atlanta Journal-Constitution found.

These investors, often known as wholesalers, have blanketed parts of the city with “We Buy Houses” signs, leaflets, mailers and cold calls, searching for houses that are not on the market. They convince homeowners to sell at a discount, then re-sell them — often on the same day — for at least thousands of dollars more. They do so without making a single upgrade.

Experts warn that wholesalers and other investors are stripping longtime residents of tens of thousands of dollars in hard-earned wealth. Homeowners too often sell without knowing the real value of their home, and realize too late that they cannot afford a new place to live with cash from the deal. In Atlanta, even subsidized senior housing can cost hundreds of dollars a month.

“It is a problem that is rampant in Atlanta right now,” said Sara Mancini, an Atlanta Legal Aid Society attorney who represented McGauley. “Once you go under contract, you really can be stuck.”

The impacts can reach across generations, experts warn. A house is often a family’s most valuable asset, especially among African Americans, research shows. The profit from a sale can send a grandchild to college, or help the next generation put down payments on their own homes.

Jacob Naviaux, a representative for SMQ Properties, LLC, the investment company that offered to buy McGauley’s house, said he treated her fairly and followed the law during her sale. Some wholesalers may deserve criticism for their tactics, but he explained his deal with McGauley carefully.

“She breached her contact on her house,” Naviaux said. “Sellers can’t just choose one day to back out of a sale.”

Wholesaling is legal in many cases and can provide a useful service. Investors offer cash deals and fast closings. Industry-savvy homeowners who are willing to take a financial hit can use them to unload a property quickly.

But in intown Atlanta’s rapidly gentrifying neighborhoods, where homes purchased for less than $20,000 30 years ago are now worth $200,000 or more, residents complain wholesalers are using hardball tactics to make money off of inexperienced sellers.

The barrage of solicitations has gotten so bad that Atlanta Legal Aid Society hands out cards to seniors to post on their doors that say, “No Soliciting. This House Is Not For Sale.”

In some Westside neighborhoods, wholesalers have turned the real estate market into the Wild West. Seminars tout wholesaling to inexperienced investors as a way to enter real estate without a license or cash reserves. Courses teach how to coax an unwilling buyer into selling. Some wholesalers market properties for sale well before they own them, attorneys and real estate agents familiar with their practices said.

“Not to say all investors are bad, but there is a lot of pressure on seniors,” Flowers said.

In one case referred to Atlanta Legal Aid, investors gained the trust of a homeowner near the booming Westside Beltline by bringing over meals and offering to pick up her prescriptions, said Robin Andrade, a Realtor who tried to help the senior find a new home after the sale.

“They gained her trust and took her house out from underneath her,” Andrade said.

The senior, who declined to be interviewed, sold her house to an investment company for $95,000 July 30, records show. It re-sold that same day to another investor for $130,000.

The senior failed to find a new place before demolition day. Investors streamed the demolition on Instagram with her lamps and other furniture still inside.

West Atlanta homeowner McGauley said she found SMQ Properties as she mulled selling. She signed a contract in April 2018 after Naviaux made a 20 minute visit to her home, she said.

McGauley said he never sent her a copy of the contract. Naviaux said emails show he did, and their text messages show that she understood she sold her home.

Soon after, McGauley found a nursing home for her bedridden uncle and decided to stay. SMQ filed suit against her in Fulton County Superior Court for $35,000 in damages.

With the help of Legal Aid, McGauley filed bankruptcy and halted the sale of her home. But she must pay SMQ $8,000 over about three years as part of a settlement agreement.

On a recent afternoon, barbecue grills and other cooking tools sat at the ready in McGauley’s backyard, in preparation for a Thanksgiving feast. McGauley, a mother of seven, has so many children, grandchildren and other relatives that they can no longer fit in the 1,175-square-foot ranch.

“I tell them no. It’s not for sale,” McGauley said.

The home will stay in the family.

Your subscription to the Atlanta Journal-Constitution funds in-depth reporting and investigations that keep you informed. Thank you for supporting real journalism.