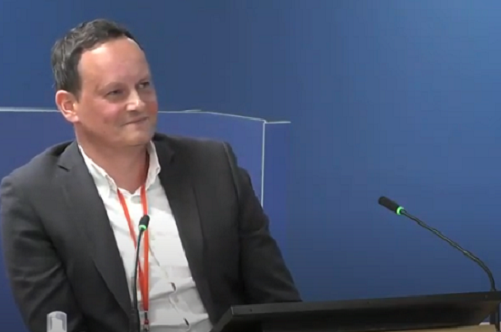 Resuming after a five-week summer break, the inquiry today heard from commercial manager Zak Maynard, who led the time working on the costings of the project.

He was asked about Rydon’s decision in May 2014 to understate the savings that client Kensington and Chelsea Tenant Management Organisation (KCTMO) could make if the cladding was switched.

The inquiry has previously heard that the firm sought to “pocket the difference” to plug a £212,000 mistake it had made in costing the project.

Today, emails revealed that after it had presented these costs to the TMO, Harley Facades realised it had overestimated the savings it had sent Rydon by “a six-figure sum”, reducing the amount Rydon could gain through the switch.

An email from Steve Blake in June 2014 said the approach should be to “compromise on the saving and at some point in the future reverse pass it back up the chain”.

Richard Millett, counsel to the inquiry, asked Mr Maynard if this meant “you should organise the finances so that Harley’s cost error would be absorbed by the TMO”.

Mr Maynard replied: “He says ‘back up the chain’, so that could be right.”

“And that means Rydon wouldn’t lose any profit at all?” asked Mr Millet, to which Mr Maynard replied “yes”.

Internal emails show a discussion within Rydon that the remaining saving, following Harley’s error, should be split “50/50 with Harley as it was their cock-up”.

Harley then agreed to split the saving, and Mr Maynard wrote: “First part of the battle won. Now we will agree to give them 10% of savings back and we are quids in!!”

Asked about this, Mr Maynard said he was “joking” in the email and added: “It just means more profit.”