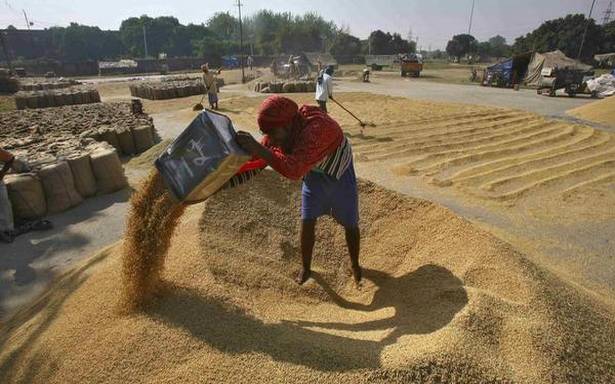 Farmers of Punjab and Haryana need the MSP-procurement system, but the government needs it even more for the PDS

Farmers’ protests have erupted once again in north India. The farmers’ unions want nothing short of a complete withdrawal of the recently enacted Farm Acts, which they claim will ruin small and marginal farmers. Their main worry is about a possible withdrawal of the Minimum Support Price (MSP) and a dismantling of the public procurement of grains. They also contend that by leaving farmers to the mercy of the open market, the stage has been set for large private players to take over agriculture.

Epicentre of the unrest

On the other hand, the government claims that the Acts will only increase options for farmers in the output markets, that the MSP-procurement system will continue, and that there is absolutely no plan to dismantle the system. To support its claims, the government points to the fact that there is absolutely no mention of either MSP or procurement in the Acts. So why are farmers so agitated as to go on a march to Delhi, which according to reports, even turned ugly in several places? It needs to be noted that the protests are largely in the States of Punjab and Haryana. If the government’s assertions are true, then why are farmers in these States so rattled? And how true are the claims and counter-claims put forth by the two sides?

The Hindu Explains | Who gains and who loses from the farm laws?

For a start, the government’s claim that there is no mention of MSP-procurement in the Acts is true. It is also true that a large-scale public procurement of paddy is going on in Punjab as the protests are raging. But farmers are really worried and appear prepared for the long haul. Why?

It is the lifeline here

The Public Distribution System (PDS) is the lifeline in these States. Farmers in Punjab and Haryana are heavily dependent on public procurement and assured price through MSP. This is far greater than farmers in any other State. Nearly 88% of the paddy production and 70% of the wheat production in Punjab and Haryana (in 2017-18 and 2018-19) has been absorbed through public procurement, Food Grains Bulletin and Agricultural Statistics at a Glance, Government of India.

In contrast, in the other major paddy States such as Andhra Pradesh, Telangana, Odisha and Uttar Pradesh, only 44% of the rice production is procured by public agencies. In the case of wheat, this percentage is even lower. In the major wheat States of Madhya Pradesh and Uttar Pradesh, only a quarter (23%) of the production is procured by public agencies. This clearly shows the heavy dependence of farmers in Punjab and Haryana on MSP and the public procurement system. In a sense, this system has been the lifeline of these States. It is conceivable then that any disruption to the system, real or perceived, will cause a major upheaval. The farmers are now up in arms against the government as they perceive their very existence to be at stake.

There are nearly 80 crore NFSA beneficiaries and an additional eight crore migrants who need to be supported under the PDS. The government needs an uninterrupted supply of grain, particularly from these two States, to maintain the PDS. In the last three years, nearly 40% of the total paddy production in the country (45 million tons) and 32% of wheat production (34 million tons) has been procured by public agencies to supply the PDS.

This year, due to the onset of the novel coronavirus pandemic and the migrant crisis, the government has earmarked much larger quantities for public distribution — about 58 million tons of rice and 37 million tons of wheat. This translates into nearly half of the rice production (49%) and 35% of the wheat production in the country. This implies that the government needs to procure a huge quantum of grains than in previous years as the government cannot afford to go to the open market. That is a sure recipe for disaster as prices will skyrocket, and with the stock restrictions gone under the recent Essential Commodities Act Amendment, there is a possibility of large-scale hoarding too.

Why these States matter

If the government intends to procure such huge quantities of grains, then it needs to turn to these two States, because it is these States that have always been in the forefront in supplying grains to procurement agencies. Nearly 35% of the rice and 62% of the wheat procured in the last three years has been from these States. Also, nearly 50% of the total coarse grains came from these two States. Thus, the government has little option but to continue its procurement from these States in the foreseeable future. Even after the COVID-19 situation improves and the migrant crisis abates, the obligations under the NFSA will continue.

Apart from addressing the core issue of the MSP-procurement system, many more improvements are needed in the Acts. The absence of a regulatory mechanism (to ensure fair play by private players vis-à-vis farmers) and the lack of transparency in trade area transactions are two of the major limitations that need to be addressed immediately. The severe trust deficit that resulted from the way the Farm Bills have been rushed through needs to be addressed by adopting a conciliatory approach towards farmers and the States.

C.S.C. Sekhar is Professor of Economics, Institute of Economic Growth, University of Delhi

Op-Ed: How support from Washington can help public transit adapt to post-COVID-19 demand

PM directs to speed up measures for procurement, supply of corona vaccines in country

Editorial: Are you a ‘wishcycler’? Charleston County aims to reform you. | Editorials