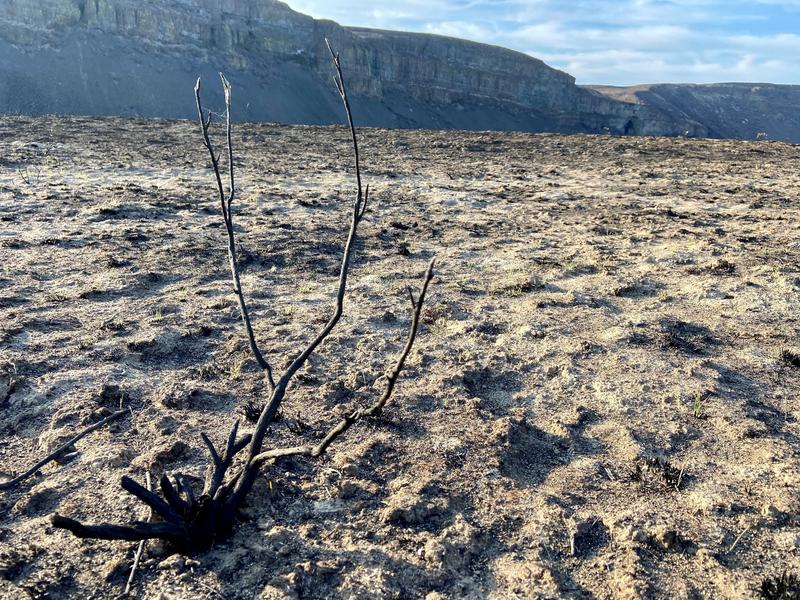 Turning left off U.S. Highway 2 into the Moses Coulee Nature Preserve in central Washington, the land changes from crisp golden bunch grasses to ash. Flames have licked at the basalt cliffs on the sides of the coulee, leaving only black shadows on the rocky edges.

This rangeland burned in the massive Pearl Hill Fire on Labor Day weekend near Bridgeport. The flames then traveled into this prime sage grouse and pygmy rabbit habitat less than 24 hours later. Firefighters caught it at the highway.

“Right now, it looks like a moonscape, whereas before, it was this diverse shrubland, with a lot of life and flowers and grasses and wildlife,” says Corinna Hanson, Moses Coulee land manager for The Nature Conservancy.

In Washington, the shrub-steppe ecosystem historically covered about one-third of the state. Now, it’s estimated less than half of that is still intact.

“It’s what I consider to be a threatened ecosystem,” Hanson says.

Many of Washington’s largest fires have burned through rangeland, not timber forests, particularly during the mega-fires propelled by hurricane-force winds over Labor Day weekend, in what’s been called an “unprecedented fire event.”

Gov. Jay Inslee called the disaster “climate fires.” Extremely dry fuels – which will become drier as the climate changes – made the area ready to burn. All that was needed were sparks. Researchers have told Oregon Public Broadcasting that the winds that fanned the Labor Day weekend fires could also be connected to climate change.

At a news conference, Inslee pushed for more green energy and low carbon fuel standards to help slow the effects of climate change – what he called the “fundamental problem” increasing the size and frequency of devastating wildfires.

“There is no forest management or thinning program that could have protected probably the bulk of these (Labor Day fires). The reason is that they really have not been predominantly in our state or national forests,” Inslee said during a September news conference. “The grass itself is what has been burning down houses. I don’t think people understand that grass can create whole walls of flame to take out developments.”

Forest thinning, he said, won’t help prevent grassland fires. Inslee said “mowing the yard of every native grassland in the state of Washington” isn’t possible. So, he says, the state must work to address climate change.

Research has shown intact native grasses can sequester a lot of carbon. But they are being taken over by annual grasses that dry out and go to seed each year.

As Washington works to combat climate change, can rangelands be better managed to make wildfires less catastrophic? What are the most effective solutions to remove invasive grasses, like cheatgrass, which dries out quickly, burns extremely hot and helps fires jump from bunchgrass to bunchgrass?

“Post-fire rehabilitation is only marginally effective, and it’s also extremely expensive,” says Tip Hudson, a range and livestock specialist at Washington State University-Extension in Ellensburg. “There’s a very large interest in helping create healthy plant communities that are both resistant to fire and resilient to fire, instead of trying to fix a plant community after a really hot fire does a lot of damage.”

Mowing the entirety of Washington is out, but there are other options.

Shrub thinning: It reduces the canopy of shrubs like sagebrush. Extremely dense shrubs can lead to sagebrush canopy fires, where all of the shrubs and grasses are burned. Thinning vast areas of shrubs can be expensive. Researchers say mowing is a less common way to treat rangelands.

Strip thinning: This is where smaller areas are thinned to create more of a fire break, which “disrupts the continuity of fuel instead of trying to mechanically alter the entire plant community,” Hudson says.

Rural fire protection: Another option property managers suggest are rural fire protection associations, which are allowed to operate in Oregon and Idaho. They’ve had a harder time getting state legislative approval in Washington.

Targeted grazing: Researchers say one of the best tools to manage rangeland is targeted grazing, which can “reduce the potential for devastating wildfire.” In targeted grazing, cattle are turned out to pastures to munch on invasive annual grasses, like cheatgrass. Light to moderate grazing can also be used to help perennial bunch grasses grow.

In one area of central Washington’s Moses Coulee, called the Palisades, rancher Molly Linville has used targeted grazing since 2011. For Linville’s KV Ranch, in arid shrub-steppe habitat, that means she keeps her cows in a tight-knit herd.

“You see them all together. They’re always together,” Linville says.

That’s because she needs the cows to help build her soil to increase native plant groundcover. The cows’ digestive process helps fertilize and build the soil.

Their hooves also trample native grass seeds, like bluebunch wheatgrass. Linville says the hoof pressure helps native seeds make contact with the soil in these windy areas. That way seeds are not blown away. The ground shouldn’t be trampled to an extreme, which is an issue with overgrazing.

Linville has her cows nip the grasses once, and then they move on.

“(That’s) important because plants in this environment were evolved to be either burnt or bitten off. They need a disturbance to regenerate,” she says. “So if there’s just one bite, a cow is designed perfectly. They don’t have any teeth. So they don’t rip out the plant. They nip it off.”

Targeted grazing also helps manage weedy annual grasses, like cheatgrass, which can make wildfires burn faster and more intensely. Cheatgrass dries out early in the fire season, blanketing areas where it grows and making it easier for flames to spread.

“Those weedy annuals, in this kind of country, they are super green and super yummy in late winter and early, early, early spring,” Linville says. “The cows love them. I run the cattle through almost the entire ranch really early, like February. They don’t even touch the bunch grasses because they’re really excited about the green cheatgrass and the green weedy annuals that have poked their little heads up.”

Her cows also like to eat the cheatgrass in the fall, when it’s brown again.

Cheatgrass does bounce back. Seeds can live in the soil for years. After a fire, it can quickly outcompete native grasses. Linville says it’s more about managing cheatgrass each year than eradicating it.

When Linville’s land burned in 2017, she thought it had been in good enough shape that the native grasses would return on their own. She even refused offers from the USDA Natural Resources Conservation Services to aerially reseed the property. It wasn’t until 18 months after the fire that she started seeing the bunch grasses return on their own.

She held off grazing the burned areas for two years. “When I did return the cows out there, the grass was in better shape than it was before the fire,” Linville says.

Linville describes the pace of more ranchers doing target grazing as “glacial,” but says it is catching on. She said she worries that areas that have been overgrazed could lead to federal or state land managers taking away grazing allotments, instead of using targeted grazing for better range management.

“I think we’ve probably increased our native plants by 40% (since 2011),” she says. “I do have to say the ranch was already in pretty darn good shape.”

The project extends throughout the Great Basin – in Washington, Idaho, Oregon, Utah, Nevada and California. Initially, a research team hoped to study ways to better restore the sagebrush steppe ecosystem. Many of their initial experimental plots have now burned.

They didn’t expect the burned areas to be so widespread in such a short amount of time. Out of the 20 plots across the Great Basin, seven have now burned, and at least another four have had “close calls,” says James McIver, an insect and spider ecologist at Oregon State University.

After surveying the Moses Coulee Preserve plots every year, the scientists have loads of data on how the rangeland was doing after the initial treatments. Now, they can watch their recovery post-fire and see which treatments worked best to slow the flames.

“We’re actually going to get a chance to use these wildfires to learn something about how we can prevent them in the future,” says Lisa Ellsworth, a fire ecologist at Oregon State University.

The Moses Coulee Preserve has 12 experimental subplots, all treated differently. In some spots researchers used a range mower to chop off shrubs to about half their height, which they thought could make flames smaller when a fire burned. In other plots, they set low intensity, patchy prescribed burns. In others, they used herbicides to knock back cheatgrass but not native plants, like poa secunda and bluebunch wheatgrass. There was also a control plot.

In this arid landscape, mowing or controlled burning doesn’t have to happen as often as in forested areas. Land treatments can last for years.

Earlier this October, researchers walked through a plot that was mowed – similar to how roadside fuel breaks are often treated. The sagebrush was burned to a crisp. Ellsworth says mowing can leave a lot of burnable material on the ground. That could make fires burn hotter, like it appears to have in this plot as the Pearl Hill fire swept through.

“Here’s a dead rabbit brush,” Ellsworth points out. “There’s some sagebrush skeletons that are here. Some of them were not completely consumed by the fire, but they’ve died.”

It’s a big change for this landscape.

“(This site was) probably one of the most diverse steppe sites we have in the network, just a diversity of plant life,” says Scott Shaff, an ecologist with the U.S. Geological Survey. “It was quite a shock to see it all burnt to the ground. But a month afterwards, there are little green grasses coming back up already.”

The fact that this area was in good condition before the fire is “promising for the post-fire response,” Ellsworth says.

“What we’re hoping to see is a really good native response where our bunch grasses start sprouting and using the resources on so we don’t get a whole bunch of cheatgrass next year, in the coming years. So it remains to be seen. I mean, it’s black. It took out all the shrubs,” Ellsworth says.

Anecdotally, researchers are seeing more bunchgrass and shrubs survive in the plots here that were treated with prescribed burns. Those burns are tricky in rangelands, especially if there is a lot of cheatgrass.

Ellsworth says that’s the biggest concern: what this all means for important habitat in Washington.

“What makes me sick to my stomach is knowing that there’s a lot of really valuable wildlife habitat in this area,” Ellsworth says.

But there are signs of life soon after the recent fire. A few bunch grasses are greening up in several plots. And there are a lot of spiders.

“It’s not one size fits all,” Ellsworth says. “It definitely requires some understanding of an individual piece of land.”

Courtney Flatt covers environmental and natural resource issues for Northwest Public Broadcasting. She is based in Washington’s Tri-Cities. On Twiter: @courtneyflatt

Global Backup Software Solutions Market 2020 | Know the Companies List Could Potentially Benefit or Loose out From the Impact...