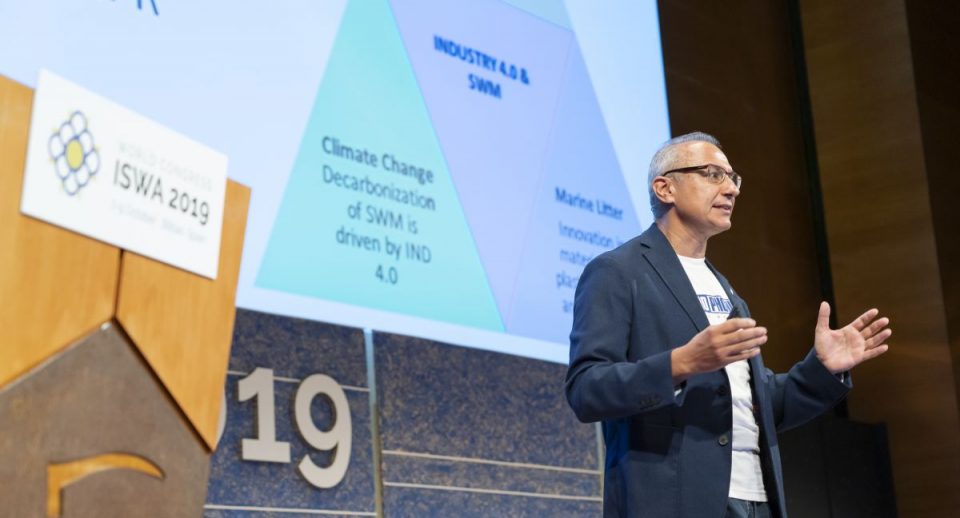 We are living the end of business as usual in waste management. The China Ban was the emblematic turning point that signalled the end of business as usual in recycling. The recent decisions of the Basel Convention on restrictions for plastic trade and the global ban on hazardous waste exports are creating a new business and geopolitical landscape. India’s blockage of 700 million dollars of imports in response to the violation of EPR obligations, for two of the biggest multinationals in the world, sets an unprecedented milestone and demonstrates that governments have more weapons than we used to think.

The end of business as usual for the waste industry is both due to the new geopolitical order of our world, but also due to four trends that redefine what we call waste management, namely global warming, marine litter, the circular economy and the rise of IND 4.0.

The rise of IND 4.0 redefines our economies through the advances of robotics, the Internet of Things, driverless cars and all the miracles of sensors and artificial intelligence. IND 4.0 is at the heart of the transformation of waste management and it’s closely related to the perspectives of the circular economy and the future of the planet. So, this is the trillion dollar question: will IND 4.0 meet the circular economy and deliver a wasteless and better future? Or will they be two parallel processes resulting in more environmental degradation and more inequality?

The waste we produce changes continuously in accordance with the production means, technical innovation, the level of income, the new needs we are trying to cover and the socio-political status. If there will be a day in which waste will remain the same for 20 years, then this is going to be a dead society. So, what are the waste streams of the future?

Obviously, literally speaking, we do not have a viable, commercial and tested solution for any of these streams. Hopefully, IND 4.0 will deliver innovations that help to address the challenges of these new waste streams.

The Internet of Things, can stimulate a circular economy and advance longer product cycles and preventive maintenance of equipment like e-waste, refrigerators, laundry machines, TV sets, etc. In addition, the Internet of Things can be the basis for global Extended Producer Responsibility schemes that will continuously monitor hazardous substances and materials and provide the best available pathway for their management, wherever they are. Take the example of e-waste as a representative of both the hopes and the challenges.

E-waste is the stream where the circular economy meets IND 4.0. We are losing something like 62 billion dollars per year in useful materials because 75% of the e-waste generated is dumped. The fourth industrial revolution brings a new solution: robots capable of dismantling equipment with high efficiency, accuracy and recovery rates. These robots are developed because they can provide a viable way for companies to save money, control their supply chains and reduce their dependence on virgin materials. So, someone can say that there is a real opportunity to close the loop and minimise or eliminate e-waste. Well, that is not exactly the case.

Recycling is not enough to resolve the problem because companies combine their efforts to continuously reduce the lifespan of mobile phones, with many different techniques. So, the benefits of recycling are surpassed by the environmental impacts of the continuous growth of sales and consumption.

This is the famous rebound effect that characterises all the industrial revolutions to date. In each one of them we had the opportunity to produce more with less, and we did it. We became much more productive; we used less labour, energy and materials per unit we produced. However, the exponential increase in consumption went far beyond the productivity gains and finally, it resulted in more environmental degradation and pollution. We can’t repeat this pattern for IND 4.0 because the planet is already very close to serious irreversible damages that create existential threats to human beings.

The challenges relevant to e-waste and IND 4.0 outline the next problem: the five systemic barriers to a circular economy that we need to address. My view is that if we are unable to do so, the circular economy will remain either a buzzword of political correctness or wishful thinking that distracts policymakers from the real problems.

Problem #1: We do not have a clear and concrete definition of the circular economy. Instead, we have 114 different ones, with huge differences between them. Some of them completely ignore the waste hierarchy, others identify a circular economy with business-as-usual recycling and other ones are applicable only on a local scale, ignoring that a real circular economy will either be global or it will not exist. I believe that we need a definition that will involve three things: the waste hierarchy, the different geographical and operational levels required, and finally the linkages to economic prosperity and social equity for all.

Problem #2: The focus on municipal solid waste and recycling is really misleading and problematic. A circular economy concerns first and foremost supply chains, manufacturing, and the extraction and use of raw materials. However, in practice, almost all the tangible measures taken and quantified targets set concern municipal waste management and recycling.

Maybe this is because it’s much easier to enforce policies in municipalities and local authorities than to stimulate a serious change in the industry. But this is completely misleading because first, municipal waste is a rather small part of the whole waste generated, between 5-10% depending on the country, and second, no matter what the advances in waste management are, the main barriers are related to what type of products are produced, from which materials and with which design – if you can’t change that, then you should not expect serious progress just from advances in waste management and recycling.

It’s just like you are expecting a goalkeeper to change the game of the other 10 players in the field without leaving his goalpost for even a second. In addition, the current dominant approach of the circular economy ignores the fact that the majority of the materials in use are stocked in infrastructure and the equipment we use.

Take the example of Austria, where for every resident we have 500 kg of municipal waste per year, 5 tonnes of waste in total (including all types) and 10 tonnes of anthropogenic stocks. Where should we put our emphasis for the long term? Where will future waste arise? Where are the valuable materials? All the answers suggest that they are in the anthropogenic stocks that are still ignored by the dominant circular economy approach.

Problem #3: The business profits are still linear. No matter what is advertised, the truth is that the biggest companies in the world continue to make money from the existing linear model and the continuous growth of consumption. There is a famous company that spends 5 million dollars per year on promoting recycling and 800 million dollars on selling more plastic bottles (both of them in the USA) – who is going to win? In this case, how seriously can we take the commitments to recycling and the circular economy compared to reality?

As an example, Skype is free and improves our lives – this improvement is not counted in GDP measures, while continuing to make phone calls in the traditional way would increase GDP. This represents a more general problem: the belief that we can have continuous infinite economic growth on a planet with finite resources. This economic orthodoxy is at the core of many of the problems we face today and it’s not compatible with a real circular economy concept. I can only characterise such a belief as a religion, since it goes against all the major findings of science.

Problem #5: Circular economy with more prosperity or with modern slavery? We tend to ignore the social footprint of the circular economy and just focus on its technological aspects, business models and material flows. Looking back at history, it can easily be seen that one of the most resource-efficient systems was the material management that was used in Nazi concentration camps.

The circular economy is not a neutral concept and we can’t ignore how it will be implemented, who is going to benefit from it and that it will create winners and losers. Next time we talk about the circular economy, we had better mean a system that will improve the lives of everyone rather than a system that will concentrate the control of materials in the hands of the few.

Crossroads in History
It seems that we are at a very important crossroads in human history. As Carl Sagan said, “Never before has there been a moment so simultaneously perilous and promising. We are the first species to have taken evolution into our own hands.” At these crossroads, we all have to contribute to a better future in which IND 4.0 and the circular economy will be combined to deliver more prosperity, less inequality and a more sustainable planet.

ISWA is already contributing in this direction, not only by starting a discussion on the hopes and challenges of IND 4.0 and the circular economy, but also by delivering continuously new content for the developed and developing world.

Our plastic pollution calculator is already recognised as a very successful tool that provides guidance for reducing plastic leakage. Our recent reports on the climate benefits of #closedumpsites, the global benefits of managing the organic fraction of municipal waste, and the ongoing projects on  Extended Producer Responsibility and the bankability of waste management projects are highlighting the wealth of our activities and our presence on the most demanding fronts of the struggle towards a wasteless world.

By advancing our emblematic initiative for mayors and municipal officers, stimulating the growth of the Women on Waste group and supporting the further expansion of the Young Professionals Group, we will be able to create new ways to deliver our content worldwide, to new and different audiences, and to attract new human resources that will further advance our contribution.

Ultimately, we are all scientists who are passionate and knowledgeable about delivering solutions that will protect human health and the environment, deliver a better quality of life and improve the sustainability of urban areas. We all know that our work is about people – not waste.

Leaders from 24 companies in the US Pharmaceutical Supply Chain collaborate to submit the MediLedger DSCSA Pilot Project Final Report to the FDA, proposing blockchain for an interoperable track and trace system for US prescription drugs