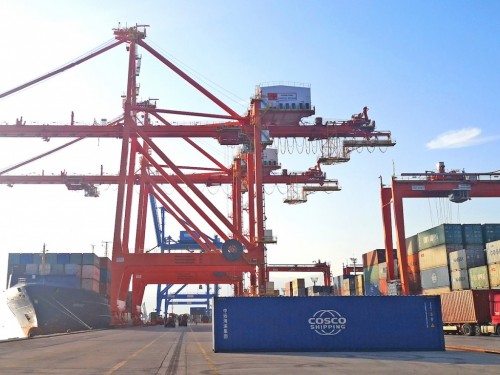 By interconnecting maritime and rail services using the Rijeka Land Sea Express, COSCO offers its clients transit time of 32 days from East China and 28 days from South China to Budapest, using Piraeus and Rijeka as ports.

Emmanuel Papagiannakis, AGCT Chief Executive Officer, welcomed this latest development, expected to further improve Rijeka’s position as the Northern Adriatic Gateway for Central and Southeast Europe: “We would like to extend our gratitude to all the stakeholders involved for their cooperation and professionalism in this start-up, as well as their continuous support for this project which has strongly positioned Rijeka port and traffic route as the south entrance for Far East to Central Europe trade.”

The Land Sea express project has strengthened COSCO’s position in the existing market, as well as opened new ones: 65 block trains were transported to and from Hungary since March 2019; 10 to and from Slovakia; and 10 to and from Czechia. Overall, COSCO throughput via Rijeka increased by 30 percent since the start of the project.

The launch was attended by representatives of COSCO headquarters in Shanghai and Hamburg as well as regional and offices in Italy (Genova), Greece (Piraeus), Ocean Rail Logistics (COSCO’s system in charge of rail transport) and other project partners and guests.

ICTSI recently drew up plans to expand its Croatian subsidiary, including a two-phase dredging scheme of 130 meters of quay over its Berths 1 and 2. Once completed, AGCT will be the first terminal in the northern Adriatic able to be able to berth vessels of up to 20,000 twenty-foot equivalent units (TEU) capacity, with an LOA of up to 400 meters and beam of 59 meters.

Complementing these initiatives are new quay cranes with an outreach of at least 24 rows, as part of the berth upgrade; and new rubber tired gantries and prime movers introduced on the landside.

Total terminal yard capacity is expected to be increased up to 600,000 TEUs per year, in line with demand.

Your Entire Supply Chain Strategy Explained On Just One Page

Environmental stories from around the web, December 20, 2019