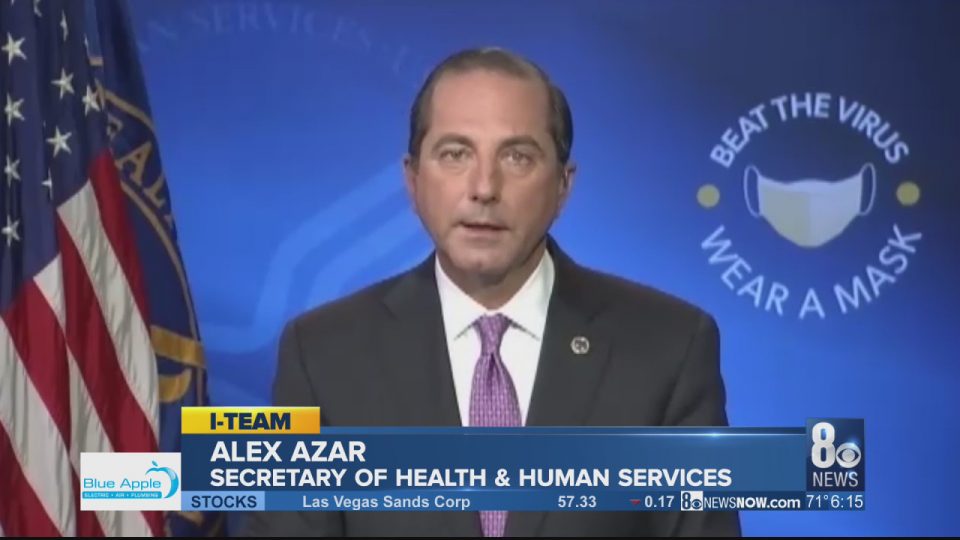 LAS VEGAS (KLAS) — The Secretary of Health and Human Services says the COVID-19 vaccine will be safe and the process to distribute the vaccine will move quickly.

The I-Team interviewed the secretary, who is also chairman of President Trump’s COVID-19 Task Force.

We asked Secretary Alex Azar how much of the vaccine Nevada will get and when we will get it. He did not provide a date or number, but he says the process is moving quickly and vaccine distribution is based on population.

Nevada is a smaller state of 3 million.

He insists the vaccine is safe and because of Operation Warp Speed, in his words, there will be brighter days ahead.

Vanessa Murphy: “It’s no secret Governor Sisolak and President Trump have clashed.  What would you say to people who think politics could affect this or people who may not trust the Trump Administration or the vaccine in that it moved so fast?”

Alex Azar — Secretary of Health & Human Services: “Well, politics has and will play no role whatsoever in the consideration, development or approval of our therapeutics or vaccines. There are over five separate steps and independent checks in the process.”

We also asked what advice he would offer for Nevada specifically to get the virus under control, considering the state’s economy heavily relies on tourism and the first shutdown did help reduce numbers but also devastated the state’s economy. Secretary Azar points to what we’ve been hearing for months: social distancing, wear a face covering and wash your hands.

We also discussed Thanksgiving. He says part of the problem is people have let their guards down and that should not happen over the holiday.

He also points to some data from the CDC on face coverings. If two people wear face coverings, even as close as a meter part, it can reduce the viral transmission by over 70 percent.