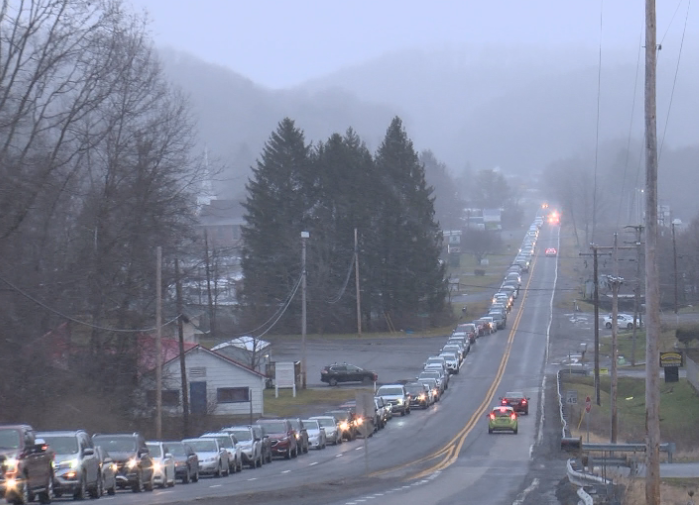 BLUEFIELD, W.v. (WVVA) — The Mercer County Health Department distributed the Moderma vaccine to local residents on Monday, but cars lined the roads surrounding the health department. Some waiting for hours, only to be turned away.

Brenda Donithan, Interim Administrator of the Mercer County Health Department, says, “It’s very disturbing that you can’t vaccinate everybody that shows up because we’re only allotted the hundred doses.”

The health department announced last week that they would be vaccinating those eighty years and older, also announcing there would be 100 vaccinations available on a first-come-first serve basis.

The problem: It’s estimated more than 500 people converged on the health department.

“This looks to me like it may be the most disorganized operation that I’ve seen in mercer county since it was formed,” said George Erps, saying that he had been in line since 6 a.m.

Another local resident, Homer E. Bibey, said that “There’s going to be bunch of them that are going to be disappointed. Gesturing to a car a few yards in front of him, Bibey continued, “This Lincoln sitting right here, he’s been sitting there for, I don’t know how long, he finally shut his engine off, his lights off.”

Those that were able to receive the shot were in good spirits, their fears of infection subsiding after receiving the first of two inoculations. After receiving the vaccine, they waited next to Princeton EMS for fifteen minutes, to make sure there were no immediate adverse reactions to the vaccine.

“I feel great, I really do,” said William Dalton, a local resident.

Danny Lawrence shared the same sentiment. “It’ll feel good, sure will. Because I really didn’t go out nowhere, obeyed what they said you know.”

Donithan says they don’t have any answers right now as to when those who were turned away will actually get a place in line to receive the vaccine,

“Unfortunately we don’t know when another shipment will come that will be allotted to them,” said Donithan. “And so if you’re after that hundredth person, then they’ll be turned away today because there’s nothing that we can give them.”

Jo Arnold of Bluefield, Virginia, says she isn’t disappointed that she didn’t get the shot, but says she is frustrated with how this day played out.

“What I am upset about is the system, or lack of system, we don’t have a system,” said Arnold. “And there’s got to be something done about that, before we again see that number of people waiting hours and not getting a vaccine.”

For those who waited, Arnold fears this vaccination event for the elderly may have been an unnecessary risk to their health.

“I’m in pretty good health for my age. This is eighty and up,” said Arnold. “But there are people that are not as fortunate as I am, and this really hurt some of them to have to be out at that time of the morning, and go home empty handed.”