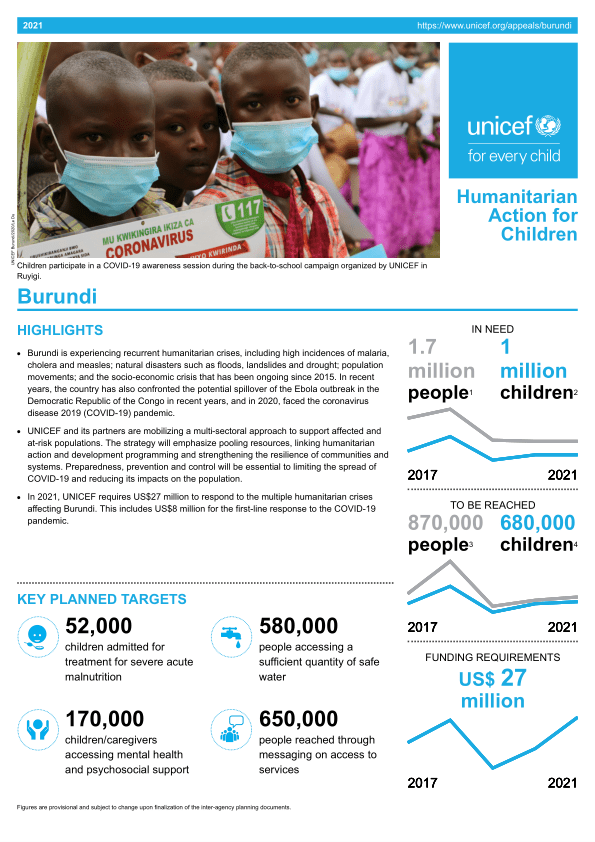 Burundi is one of the poorest countries in the world and one of the most densely populated countries in Africa. More than two thirds of Burundian children live in poverty. Years of sociopolitical and economic crisis have had a serious impact on the population’s access to basic services and the resilience of systems and communities to cope with recurring crises. At the beginning of 2020, 1.7 million people in Burundi, including over 1 million children, were in urgent need of humanitarian assistance.

Burundi is particularly vulnerable to climate change and is affected by natural disasters that cause significant human and material damage throughout the year. Over 114,000 people – 83 per cent of the internally displaced population in Burundi – are displaced due to disasters. While the number of displaced persons has been steadily declining since 2018, in 2020, the number of displaced persons increased due to recurring high winds and rainfall. Increased temperatures and dry spells predicted for 2021 will negatively impact harvests and generate additional population movement, putting children at risk of protection violations, school drop out and undernutrition.

In 2020, Burundi’s fragile health system confronted multiple health emergencies, including malaria, cholera, measles and COVID-19, among other issues. Since 2018, the country has mobilized efforts to prevent and prepare for a potential spillover of the Ebola outbreak from the Democratic Republic of Congo. The threat of an Ebola outbreak in 2021 remains significant, and Burundi will need to continue to strengthen its capacity to respond.

Following the 2020 elections, Burundi is expected to see a significant return of refugees, particularly those that sought refuge in Rwanda and the United Republic of Tanzania. Since 2017, over 88,000 Burundian refugees have received assistance to return home through the voluntary repatriation process supported by the United Nations High Commissioner for Refugees (UNHCR). Approximately 390,000 Burundians (56 per cent children) are still hosted in the Democratic Republic of the Congo, Rwanda, the United Republic of Tanzania and Uganda. Less than half of Burundian households report that their children have birth certificates, further undermining access to health and education services.

The nutritional situation of children remains poor. Burundi has one of the highest rates of stunting in the world, with more than half of children under 5 years suffering from chronic malnutrition. More than 63,000 Burundian children are at risk of severe acute malnutrition (SAM).