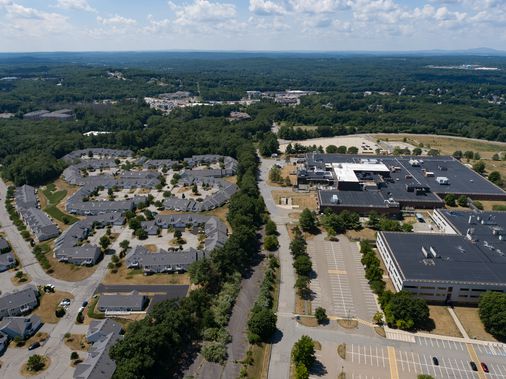 “We’ve riled up the town,” Lalli said in an interview.

The Quail Run residents started the “SAVE HUDSON MA! STOP THE WAREHOUSE!!!” Facebook page, which has about 450 members, and have raised more than $2,000 to make fliers, posters, and banners to oppose the development. Where Lalli lives in Quail Run, only a thin line of trees and fence separates her back deck from what could soon be a loading dock for tractor trailers.

Boston Globe tech reporters tell the story of the region’s technology and innovation industry, highlighting key players, trends, and why they matter.

Of course, all residents know they purchased property next to the Intel facility, but many say a distribution warehouse ― and its high-volume traffic ― would adversely affect their quality of life.

On Tuesday night, Lalli and hundreds of Hudson residents attended a planning board meeting to review the site plan proposed by Portman Industrial, the Atlanta-based firm Intel picked to redevelop the property.

Early in the evening, board chair Robert D’Amelio said the planning board likely had no legal grounds to block the project since the property is zoned for industrial use. That means the owner doesn’t need a special permit to build a distribution warehouse.

But after more than three hours spent listening to residents’ concerns about traffic, noise, and air pollution — and a suggestion that his board seek legal counsel to explore its options — he said he would “rethink” his position.

“It is a vast, bigger problem than, to be honest, I anticipated,” D’Amelio said. “Saying that doesn’t mean it can be done, but you opened my eyes to a lot of different things.”

The 75 Reed Road property was developed in 1979 by Digital Equipment Corporation, once the second-largest computer manufacturer in the world, and later acquired by Intel, which used the campus to make microchips.

As chip manufacturing shifted overseas, Intel has laid off hundreds of workers in Hudson, a town of about 16,000, and demolished the building where it used to make chips. Two other buildings were used by about 800 research and development employees.

Intel put the entire property up for sale about a year ago, according to a note it sent to neighboring residents in June.

The company plans to relocate its office late next summer, at which time it will transfer the property to a new owner. That means Portman has plenty of time to find a tenant before it would break ground on the project.

JP Plunkett, founder of Red Dome Realty, a real estate firm based in Dorchester, said he isn’t surprised Portman doesn’t have a tenant lined up.

“I bet you they don’t,” he said, citing the high demand for industrial space that makes building a facility like that a “no-brainer.” Plunkett is not involved with the Hudson project.

Portman estimates the warehouse could have 190 loading bays, trailer parking for approximately 540 trailers, and about 450 employee parking spaces. The company said it plans to build sound barriers and prevent left turns at a nearby busy intersection.

“Usually you find these things in industrial parks right off an exit from the highway,” said Michael McCormack, a member of the board of governors at Quail Run. “This is just plunked in the middle of two over-55 communities, a daycare center, athletic field, and two schools.”

Plunkett said there is “close to always” neighborhood opposition to these types of projects, but added that modern distribution centers are “not like some polluting factory from 1976.”

“They look like retail or office buildings with a very nice curb appeal, and they generally have a wonderful landscape so they’re aesthetically pleasing,” he said.

Kristina Johnson, Hudson’s planning director, said that though the planning board has been working closely with Intel and Portman over the past few months, the Town of Hudson has not offered, or been approached to offer, monetary or tax incentives to encourage development.

She added that there would likely be several more public meetings until a decision is made, with the next one scheduled for Sept. 27.