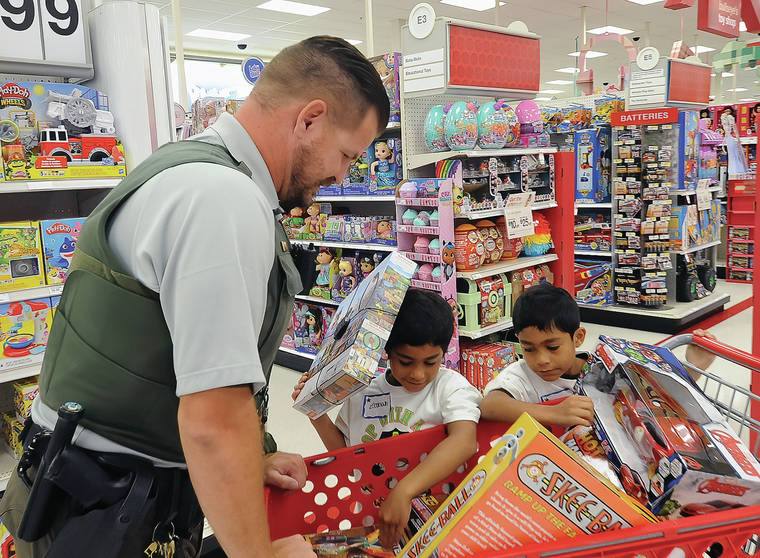 KAILUA-KONA — Hawaii Police Officer Damien Grace came full circle at the annual Shop with a Cop at the Kona Target.

The Kona patrol officer participated in the program when he was a small child on Oahu — and on Saturday, he had the opportunity to be on the other side of the cart.

Fifty keiki participated in the Catholic Charities sponsored event, paired off with a law enforcement officer for a Christmas shopping spree.

“I remember the officer I shopped with made an impact on my life,” Grace said. “Growing up I was afraid of officers, but going shopping with one was an eye-opener about police. It was my first real contact with a policeman and it totally changed my opinion. As soon as I heard about this, I had to sign up.”

That is the purpose of the event, according to organizer Erin Basque.

“Christmas time is a time to be happy and blessed,” Basque said. She explained the keiki involved come from foster care, shelters and community members involved with Catholic Charities. Some of the children watched as officers took them from their parents, and grew up mistrusting police. The event bridges the gap between the keiki and police officers, resulting in a positive experience.

Each child received a $100 Target gift card, provided by Catholic Charities, along with a supplemental card courtesy of the VFW Auxiliary for the officers to use in case the child went over their allotment.

After a briefing and breakfast provided by Target, keiki were paired with an officer. Over 20 HPD officers, two Sheriffs and a Park Ranger lined up as the kids chose their partner and started on the shopping spree.

First stop was photos with Santa. Each child received a souvenir print with St. Nick to commemorate the day.

Then the shopping began.

Most headed to the toy department, however an overwhelming amount of children wanted to shop for family members rather than themselves.

Justice Madrid, 13, had her cart full of presents for her family. Her partner, retired Sgt. Rollin Rabara, urged her to get something for herself, which was met by a hem and a haw. She had to find something for her mom.

Retirement has not stopped Rabara from participating in the event. He’s been involved with the program since its inception and finds the experience fulfilling.

“Any time we can leave a positive impression, it’s a good thing,” he said. “Things like this make them realize we are good people, and that’s what this job is…helping people.”

A positive impression is exactly what Angela Green got from the experience. She was there with her two children who had a great time shopping with an officer.

“I love this,” she said. “We came from an abusive relationship, so the kids didn’t have the best interaction with police.” She praised Catholic Charities and the event for giving her kids to see the officers in a different light.

Japan Is About to Become the Newest Hot Region for Wine

It’s a step up from tire thefts, at least | The Riverdale Press