Queensland agtech SwarmConnect is not only building advanced farming tech. It’s also setting out to completely revolutionise farms all over the world — an endeavour that’s going to take a little more than a few autonomous tractors.

Founded two years ago by Andrew and Jocie Bate, the startup raised $4.5 million just last month, in a round led by Tenacious Ventures and Artesian. It’s also attracted support from the Queensland Business Development Fund.

Thus far, it’s been focused on providing farmers with autonomous farming machines, with customers typically signing up for a three-year lease with a monthly fee.

But SwarmFarm has now added a second string to its bow, through the launch of its SwarmConnect platform — or, as Andrew Bate calls it, “the app store for agriculture”.

SwarmConnect allows developers from anywhere in the world to build an app for use on SwarmFarm machines.

If they charge for that app, the business takes a commission.

This is a startup with not only global goals, but revolutionary ones.

The global population is ever-growing, and sustainability and the environmental impact of food production are front-of-mind.

“For us to revolutionise agriculture around the world, there was no way we could create every use for agricultural robots that’s required,” Bate tells SmartCompany.

So, instead, the co-founders created a way for their machines to be tailored to the demands of their users.

The open model is designed to give farmers access to the best tech around, and developers the opportunity to help solve pressing problems, regardless of location or even the number of people they’re catering for.

“We’re building a platform so that the smartest innovators all around the world have a path to market,” Bate says.

Innovation from the ground up

Tech is not necessarily the first thing to spring to mind when you think of agriculture. This sector has a reputation for being traditional, manual and perhaps a little slow to adopt technology.

Get COVID-19 news you can use delivered to your inbox.

You’ll also receive special offers from our partners. You can opt-out at any time.

Agriculture may not be as easily digitised as some sectors, but modern farming equipment is super high-tech, with multiple computers, sensors and touch screens. Many farmers have machines worth in excess of $500,000 in their fields, Bate notes.

However, much of this is what he calls “incremental technology”.

“We’ve just kept adding more and more technology on top of technology, and made farming machinery more complicated,” he explains.

Historically, bigger machines have meant more efficient farming. But, by chasing labour efficiency by using big tech, farmers risked compromising their crops. So Bate instead focused on designing autonomous tech that made things faster and more efficient, but not so big.

Rather than farming in a way to fit the machine, SwarmFarm focuses on the best way to grow a crop, and builds tech to do that.

Equally, agricultural technology is by no means a new sector.

Australia has long been the testing ground, and Bate says most of the major manufacturers won’t release a product to the rest of the world until it’s been fully tested in Australia, “because it’s such a hard operating environment, and such an innovative group of farmers”.

Aussie farmers are forced to be innovative to survive, he says, and they don’t receive the same kind of government subsidies that farmers do in some other countries.

“If you’re not efficient, if you’re not about adopting the latest technology, you go broke,” he says.

“It really breeds a really innovative, early adopter kind of atmosphere in the agricultural world, which is perfect for releasing new technology.” 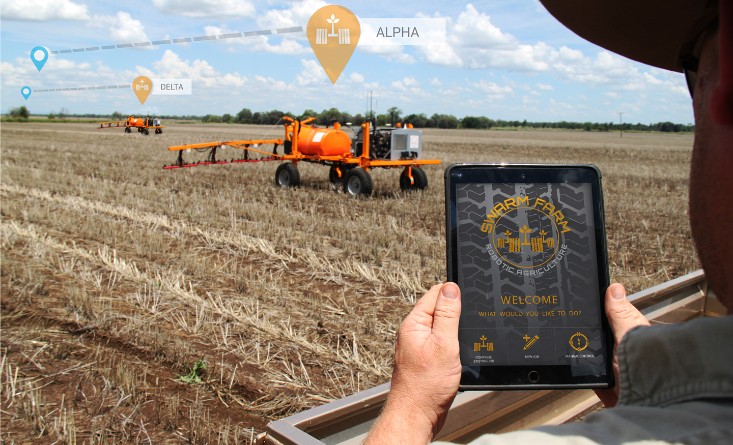 Agtech’s time in the sun

If the agricultural industry is as innovative and adaptable as Bate says it is, that can only be a good thing in the current climate.

Between the ongoing climate crisis and the COVID-19 pandemic, consumers are more and more frequently demanding food from local and sustainable food sources.

The environmental impact of his own farming activities has always been front-of-mind for Bate.

His farm is in the catchment area of the Great Barrier Reef, and he uses robotic technology to help with everything from soil erosion, to the use of fertilisers and pesticides that could find their way into the ocean.

“It’s good for the environment, but it’s also good for farming and it’s good for your bottom line,” Bate says.

“No one wants to use more fertiliser than they need to, or waste herbicide and pesticide.”

The COVID-19 pandemic has also highlighted the role Aussie farmers play in everyday life, highlighting its status as an essential industry. People are starting to consider where their food comes from, as well as the challenges in supply chain logistics and sourcing labour.

At the same time, there’s a strong Aussie agtech sector emerging — one that Bate says is only getting stronger.

“I think agtech is starting to shine now, and having its time in the sun,” he says.

“COVID is something that has actually pushed it forward.”