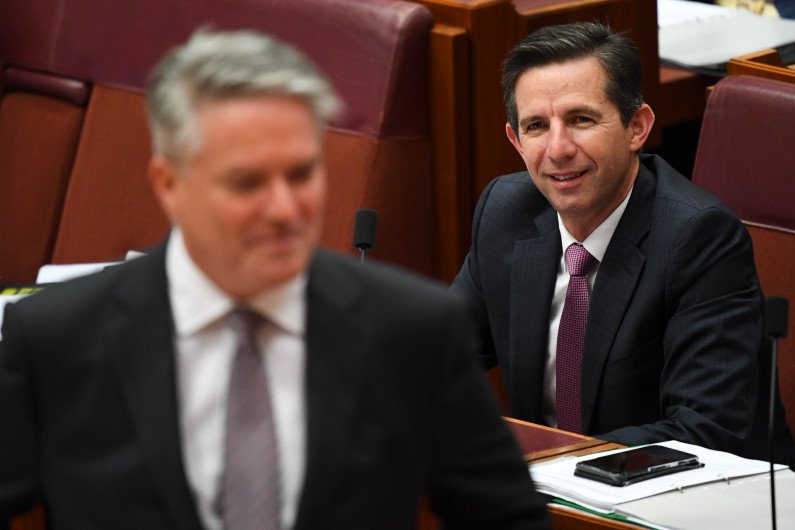 A systems overhaul in how government approaches procurement of external consultants is expected to improve transparency, value for money and capability building across the Australian Public Service.

Over the next two years, the multi-billion dollar external contracting industry attached to the Australian government will change forever.

Most procurement panels for management advisory services across the Commonwealth will be abolished, replaced by a single, whole-of-government ecosystem that will centralise management of consultancy contracts, introduce standardised fees and mandate more robust financial reporting.

Under this array of new processes, a more transparent, value-added and capability building relationship will emerge between the Australian public service and consultants, affirming value for taxpayer dollars and addressing mounting criticism about outsourcing largesse.

At least, that’s the plan, one that the Department of Finance and their new minister Simon Birmingham will begin to road test over the coming months.

If successful, the resulting evolution will also likely to change how external providers approach their own relationship with government, particularly within the scope of the COVID-19 pandemic and the mammoth task ahead for the public service, as consulting veteran Nina Terrey explains.

“The challenges of this moment mean government needs to be more collaborative with how it makes things,” Terrey, a global partner at ThinkPlace, tells The Mandarin.

“It’s not just what we believe and how we work it’s what our partners across numerous projects are telling us all the time. There’s a hunger for it.”

An evolution in consulting: Finance moves ahead with systems overhaul

In November, Finance will publish its first official approach to market seeking participants for one of three eventual procurement panels, effectively asking providers of financial management advisory services to pitch their best offer for inclusion in this new centralised ecosystem.

Under draft agreements worked up by the department in August, successful consultants will be required to sign onto the whole-of-government procurement panel until September 30, 2025, while fee increases will be capped at economy-wide wage growth, starting annually from April, 2023.

Get the Juice –
the Mandarin’s  free daily newsletter delivered to your inbox.

You’ll also receive special offers from our partners. You can opt-out at any time.

Service providers will be required to submit to audits at the discretion of the government, and will be prohibited from subcontracting work without written permission from relevant agencies, while a new performance management framework will also apply,

In return, successful bidders will be accepted into procurement panels responsible for managing consultancy services across government, and because standard terms, conditions, performance management and fee structures have already been worked out, the idea is it will be easier and cheaper to establish contracts.

There are some notable exceptions: contracted labour hire and ICT consultancy services will not be covered under the new arrangements. But otherwise, “management advisory services” are broadly defined as consulting with an “intellectual output”, including research, evaluation, advice and recommendations.

Three panels will be established in total, implemented over three phases, starting with financial management advisory services next year and expanding out to corporate and commercial advisory services through 2021-2022.

The express purpose of the new system is to assist in “getting the balance right” between the core of the permanent public service and the use of external consultants, as outgoing Finance Minister Mathias Cormann explained in last week’s budget.

“The panel will leverage the Commonwealth’s collective buying power, to ensure best value when it engages with businesses to draw on their expertise and strategic advice … [it] will also increase transparency through improved data and reporting,” Cormann said.

Seldom is Commonwealth business scrutinised like the nexus of average staffing level caps and growth in external consulting since the Coalition won government in 2013; audit office reports, an inconclusive joint parliamentary inquiry and round after round of Senate estimates hearings have explored how much departments spend on consultants, and why.

After years of examination, the government maintains judicial use of external consultants is essential to the operation of a modern public service, and an independent review of the APS last year largely agreed, but did echo Auditor-General criticism about a lack of transparency in procurement.

A widely studied national audit office (ANAO) report from 2017 identified a series of shortfalls in procurement practices, finding spending on consultants increased from about $400 million in 2013-14 to $545 million in 2016-17, a quarter of which was awarded to the so-called “Big 4” consultancies — KPMG, PwC, Deloitte and EY. 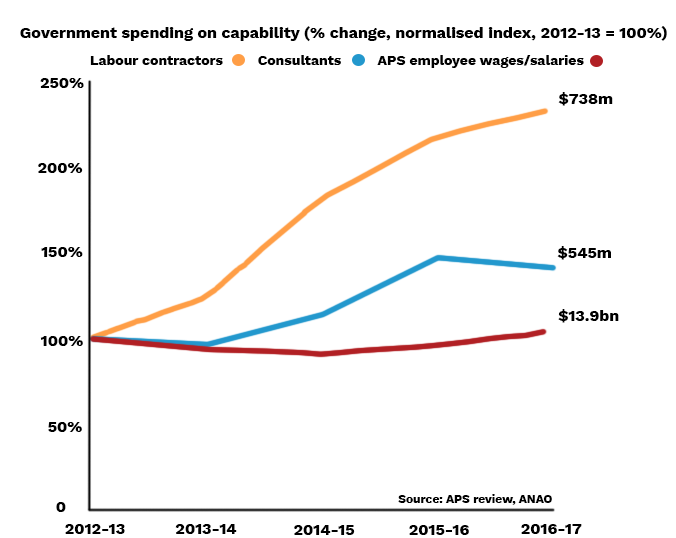 These figures are likely incomplete. The ANAO has consistently identified an inability to develop a whole-of-government view of procurement spending, owing to shortcomings in the AusTender platform and an inability to determine whether taxpayers are getting value for money.

This shortfall in data reporting about use of consultancies has also hampered examination of whether outsourcing has inhibited capability across the public service, as the independent review remarked late last year.

“The number of contractors and consultants working for the APS is not counted and data on expenditure are inconsistently collected across the service. Data insights that would shed light on whether contractors or consultants met objectives are not routinely aggregated,” the review found.

Read alongside recent changes to reporting rules that will require non-corporate Commonwealth entities to disclose consultancy spending in their 2020-2021 annual reports, its clear the government is moving to address ANAO criticism and recommendations from the review of the PGPA Act.

Overhaul an opportunity for consultants

What will emerge in the wake of this whole-of-government centralisation of consulting procurement is yet to be seen, but if the government’s goal is to streamline and bolster its processes, consultants are likely to change their own approach as well.

Terrey says the forthcoming changes reflect wins in other government procurement programs, including the Digital Transformation Agency (DTA)’s marketplace model, which has driven a centralisation of procurement for external ICT services.

“For consultants there’s a clearer view of the overall picture, of how projects fit within a larger strategic landscape. We think that’s a really exciting development,” Terrey says.

Established in 2016, the DTA’s marketplace was a product of the National Innovation and Science Agenda and has received rave reviews for making project requirements clear to all parties, promoting more effective and transparent provision of services to government.

Terrey says the latest changes being run out of Finance has the potential to further develop a culture of value-added and capability building consulting services.

“Consulting should always be about adding value. It’s about collaborating with government, partnering to create something better and bringing new voices and capabilities into the process to get a better outcome,” Terrey says.

In this sense, while the new whole-of-government procurement approach is undoubtedly an attempt by the government to improve transparency and rigour around value for money, it can also be seen as an opportunity for consultants willing to pursue genuine partnerships with government.

“When we work across the APS there is almost always a part of the project that’s about capability building. Exposing others to our methods as part of a co-design team helps them increase their own skills and diversifies their experience,” Terrey says.

Why does govt want ‘country of origin’ flagged on procurement portal? How will you be impacted?