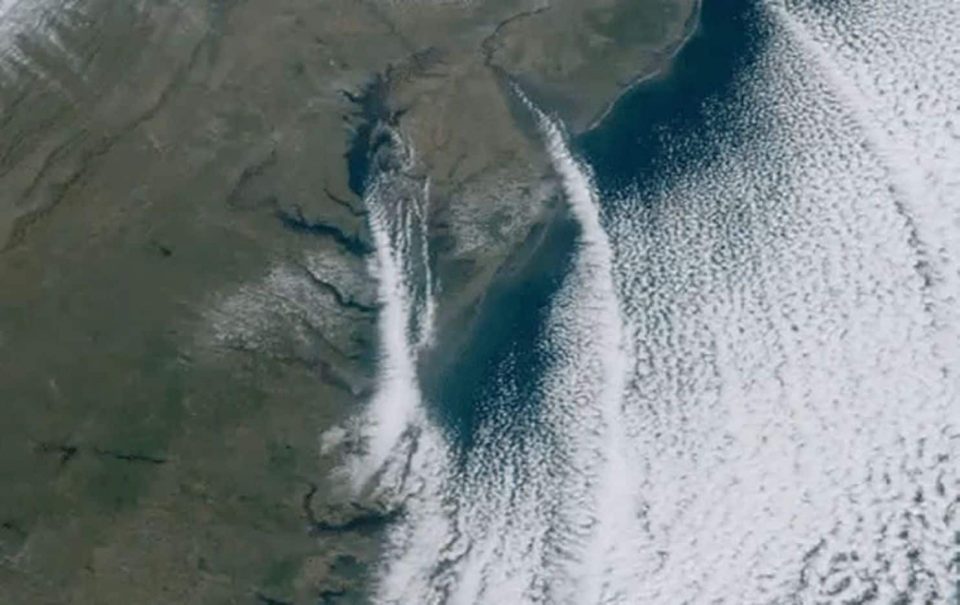 Clouds streak over the Chesapeake and Delaware bays Wednesday. Note the patch of white just west of the Chesapeake Bay over east central Virginia; that is snow that fell on Tuesday. (NOAA/CIRA via @weatherdak/Twitter)

Out of thin air, rows of clouds formed in a long line, streaking over the main channels of Chesapeake and Delaware bays, almost as if hand-painted.

The fast-flowing streams of clouds made for a stunning scene on weather satellite imagery. But how did this spectacle occur? Take Arctic air, and blow it over a long fetch of warm water, and you manufacture clouds.

It began with the record-setting frigid air pouring over the relatively mild waters of these bays — setting up a critical contrast for cloud formation. Air temperatures were in the 20s and 30s, whereas the bay waters were in the mid-50s. The warm air at the water’s surface, less dense than cold air rushing over it, was then able to rise, cool and condense into clouds.

But for the clouds to line up along the entire lengths of both bays, which is somewhat rare, the cold air had to enter at just the right angle and pass over the water for a sufficiently long distance to give clouds time to form.

On Wednesday, the winds were blowing in from almost due north (between 340 and 10 degrees) which is optimal because that direction is oriented along the length of both bays. When the winds blow from this direction, they essentially act as a conveyor belt, carrying the clouds along the bays’ entire length into the Atlantic Ocean.

Sometimes, the clouds that form can produce bay-effect snow, much in the same way cold air passing over the warm water of the Great Lakes produces lake-effect snow.

Weather radar suggests some bay-effect snow may have developed on the very southwestern tip of the Delmarva Peninsula adjacent to the Chesapeake Bay on Wednesday.

Because the Chesapeake Bay requires such a specific wind direction for clouds to form and is so narrow, it usually can only generate snow in limited amounts. The clouds aren’t able to grow to the extent they do over the Great Lakes, where the wind blows over water a greater distance.

Some other places that can see lake- or bay-effect clouds and snow include the Great Salt Lake in Utah, and Cape Cod Bay in Massachusetts.

“This is exactly what all the factory workers should do”: Autoworkers support struggle by teachers and students to shut down schools

See Lucid Motors’ Factory In Arizona Ahead Of Air Launch