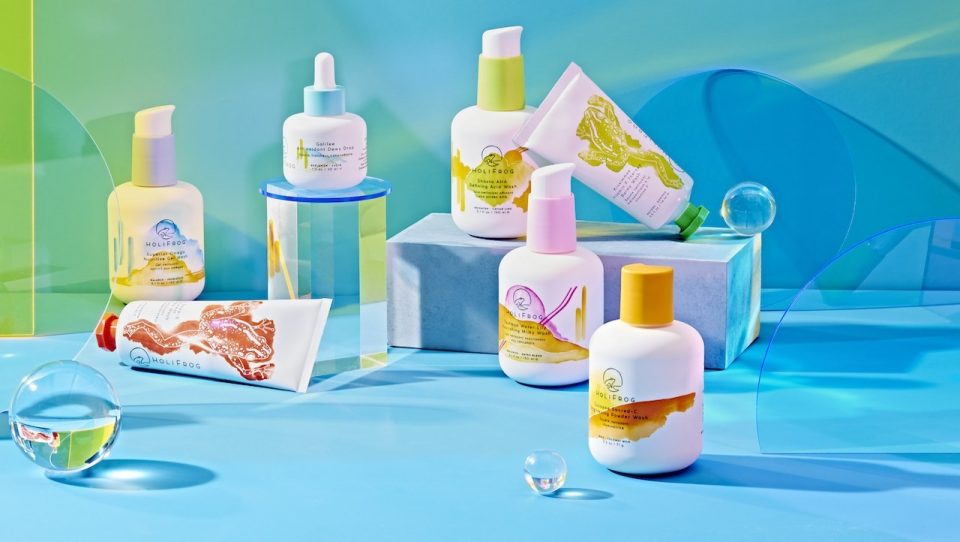 As a brand new brand, 2020 was supposed to be an exciting year for Holifrog.

Holifrog, a skin-care brand launched in Sept. 2019 with cleansers designed for various needs, was initially slated to expand internationally and expand its product portfolio this year, among other moves in the name of growth. But one of the most immediate impacts Covid-19 had on beauty was in the supply chain, with production factories shutting down and shipping delays. This revealed just how fragile the beauty ecosystem is. For a brand that at the time was less than a year old, mitigating supply chain problems was not only entirely new for its founders, but it could have damaged the brand’s young reputation.

Emily Parr, Holifrog co-founder, said the self-funded brand made $2 million in sales in its first year and that Holifrog’s sales are 44% DTC e-commerce and 66% wholesale. The brand is sold through partners like Dermstore, HSN and Net-a-Porter.

When Covid-19 began making its way stateside in March, Holifrog had just debuted a new scrub face wash on March 10 and was already deep into planning its May and September launches (a powder face wash and its first serum, respectively). Parr said that, following the launch of its March cleanser, factories began shutting down, and bottlenecks in packaging supply chains emerged. Holifrog face wash bottles are produced in Miami before they’re trucked to and printed in Ohio. They’re then transported to California for the formulating lab to fill the bottles.

“At that point, we thought, ‘Oh, God, our launch is probably not going to be on time,’” said Parr. At that point, “every manufacturer and lab had tried to figure out how they could become essential by producing hand sanitizers.”

In late March, Holifrog’s lab and printer partners shut down and long-haul trucking and transportation were delayed, pushing out the launch date for the powder face wash from May to June 16. Between mid-March and mid-July, trucking was reduced by about 75%, said Majeed Hemmat, Holifrog co-founder.

“Typically, I could get stuff picked up within 48 hours, but [at that moment], we would be slotted in for two to three weeks in advance,” he said. “And we don’t want to be the brand that runs out of products. When you run out of products, you don’t look good. The customer ends up searching for something else similar [from another brand], and you don’t want to let your retailer partners down.”

Hemmat said he typically orders bottles three months ahead of a production run and orders only what the brand needs at that moment. The first production run of the March face wash was 10,000 units, for example. In March, Hemmat began doubling his orders to approximately 25,000 units to avoid running out and is now making orders six to eight months ahead. Parr said that the duration these orders are expected to last can vary between products. For example, when the brand restocked its Shasta AHA Refining Acid face wash in June, Holifrog had already committed nearly the entirety to retailers. It kept only a small percentage for its own e-commerce until the next production run.

Another impending supply chain hiccup relates to the supply of pumps. One unanticipated consequence of the beauty industry’s vigorous jump into hand sanitizers and hand washes is that it caused a shortage of bottle pumps, said Parr. Because the brand has pre-ordered further in its future and increased purchase orders, it has yet to be directly impacted, but Parr said she is aware of a wider industry shortage. Should the brand face a direct shortage from its partners, it will tap into a reserve pile of 50,000 pumps held at its Kentucky warehouse. This stockpile was not intentional, but actually the result of a change in a bottle design that resulted in a surplus of pumps. The pumps, which are white and were ordered in Dec. 2018 prior to the brand’s launch, were before Parr and Hemmat decided they needed color-coded pumps to align with the final bottle design. At the time, she and Hemmat were “kicking ourselves over this mishap” she said, but now she anticipates that some bottles may need to use them if there is a second Covid-19 wave . Indeed, part of New York City, Canada and Germany are seeing rising cases signaling a second wave is coming.

“You can’t predict the pandemic, [but you also can’t predict] if the factory’s bottle machine will break down and take a month [to fix],” said Parr. “The only way that you can continue to get all of your products on time is to assume there’s always going to be something that goes wrong with every single launch. We work nine to 12 months ahead for every product now.”

The Coronavirus Pandemic May Be Loosening Links In The Supply Chain

Ask These Questions To Create a Successful Supply Chain Transformation