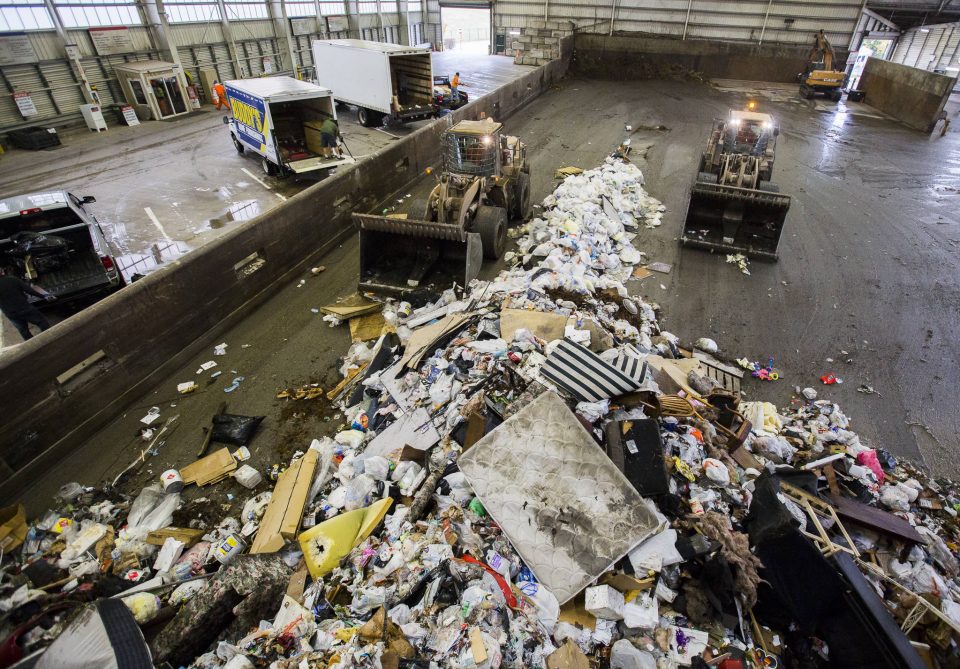 These changes have been made mostly in isolation. But from the March stay-home order to phased re-openings, the story of the past year can be told through our trash.

Snohomish County trash collectors have been picking up 20-30 percent more garbage from homes, an increase almost entirely offset by a drop in commercial waste.

While folks are at home, the kind of things we are throwing away are different. Cardboard boxes pile up in excess. Takeout containers, most of which aren’t actually recyclable, gunk up recycling bins. The summer output of lawn trimmings and other yard debris nearly doubled, as people cooped up at home turned to outdoor chores to pass the time.

Our bins runneth over

Throughout the pandemic, the people who collect our waste have seen a massive shift in where it comes from. More trash is accumulating in curbside bins outside homes, rather than alleyway dumpsters and commercial bins.

Waste Management’s Snohomish County residential customers created 21% more tons of garbage in August than they did in the same period in 2019. Recycling was 23% higher.

That’s because many professionals are working at home rather than at the office. Restaurants are operating at partial capacity or are closed. Many businesses have closed their doors forever.

Trash collection in Snohomish County is a complicated web of private and public institutions, each with varying pickup and processing protocols.

Three main waste haulers collect trash in the county, depending on where you live: Waste Management in Arlington, Bothell, Brier, Edmonds and outside other Snohomish County cities; Republic Services in Edmonds, Lynnwood, Snohomish and some east county areas; and Rubatino Refuse in Everett.

Rubatino declined to release specific statistics but reported the company was seeing similar things: fewer dumpsters to empty and more waste set out on the curb.

In summer, a wave of Rubatino customers asked to increase their garbage can size, spokesperson Judi Spade said.

The company also saw a surge in requests for large roll-off containers, like the dumpsters you might see in an alley. Most people use them for large construction projects or yard cleanups, she said.

The number of extra item charges essentially doubled for residents setting garbage bags next to their bins on the curb.

Republic Service’s residential trash and recycling pickups doubled between March and May, Northwest Director of Municipal Services Jim Hutchinson said. Now, pickups are about 30% above normal.

People throw their trash onto the tipping floor to be loaded into a compactor at the Airport Road Recycling & Transfer Station on Nov. 24 in Everett. Photo by Olivia Vanni/The Herald (Everett)

They’re also seeing more customers. In October alone, almost 9,500 more people brought loads of waste than during the same period last year, Greninger said. That could be because residents are dropping off extras that won’t fit in curbside bins, or making a dump run with materials from a house project.

“We’re just generating a lot of stuff while at home,” Greninger said.

The county has also seen a wave of residents recycling latex paint: an increase of 71% since July, Greninger said.

“I think a lot of us are doing painting, redesigning and DIY-type projects,” he said.

And there have been lots and lots of cardboard boxes.

Many are from Amazon orders and other online shopping, said Juyeong Choi, a professor at the Florida Agricultural and Mechanical University studying how the pandemic is impacting solid waste processes.

More residents are placing large pieces of cardboard outside their bins, either because they’re too big to fit or because their bins are full, Republic Services’ Hutchinson said.

When cardboard gets wet, it becomes trash. If even 10% of the cardboard is saturated with water, it’s problematic in the recycling process and can contaminate other material, he said.

Even if a container has a recycling logo on it, processing facilities may not keep it. That’s because there’s no processing market for the material, even if it’s technically recyclable.

It’s something Rubatino faces as well.

“A lot of companies say their plastic is recyclable,” Spade said, “But you can’t find a buyer to take it from you.”

Rubatino takes its recycling to a sorting facility in Bothell run by Waste Management. The facility can’t recycle anything that’s #6-type plastic, including plastic bags, plastic egg cartons and takeout containers. That means most takeout containers should go straight in the trash.

Then there are the blue-and-white padded envelopes that some Amazon orders arrive in. Those aren’t recyclable either. You have to take them to a drop-off location that will collect them. Only about 4% of that material actually gets recycled, said Conrad MacKerron, senior vice president of environmental advocacy nonprofit As You Sow.

But people often put materials in their bin that don’t belong in an effort to be environmentally friendly — a trend so pervasive it has a name, “wishcycling.”

“People try and do the right thing,” Spade said. “So they put all these recycling things in the bin and truly it’s not recyclable, or it’s contaminated with something that contaminates the whole load.”

During the pandemic, Republic’s contamination rate — the percentage of recycled stuff that comes to them contaminated — has increased to 25 percent. Normally, it’s 10 percent to 15 percent.

“Items that residents hoped would be recycled are actually sent to the landfill, which is what they were trying to avoid in the first place,” he said.

The pandemic came after major changes for the recycling industry. About two years ago, China stopped accepting several types of recyclables, leaving many plastics without a market in the United States.

“This is a one-two punch we’ve got going on right now,” Hutchinson said. “We have COVID and we’re still reeling from the impact of trying to sort out the issue of China basically changing some of the rules on what was acceptable.”

Overall, the U.S. recycling system captures only about 32 percent of all recyclable materials, according to a 2020 report by the Recycling Partnership.

It’s too soon to tell what broad-reaching impacts the pandemic will have on the solid waste system, said Choi, the researcher in Florida.

Some big questions will have to wait for more data collection and analysis.

Is the pandemic causing more material to be sent to the landfill versus getting recycled?

That’s exactly what Choi, his research partner Tarek Abichou and their graduate students are looking to answer next.