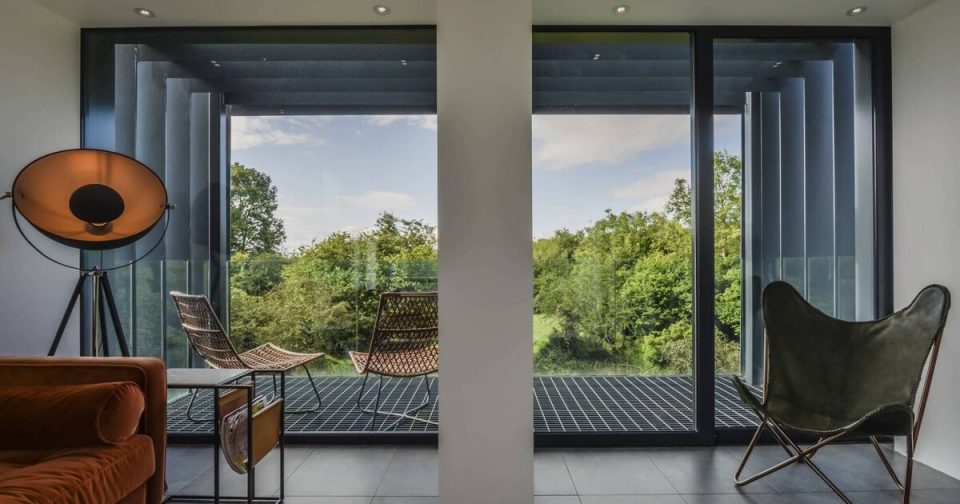 Now one of the fastest-growing Google searches, the “container home” concept still had an enormous novelty factor when Patrick Bradley drew up the plans for his dream home.

Patrick agrees it was “the quirkiness” of his build that captured the imagination.

“Eight years ago, people laughed at me,” he says. “But the dream worked out.”

The laughter didn’t stop him and Patrick completed Grillagh Water House from £10k worth of shipping containers in just under 10 months.

Located on the banks of the Grillagh River and in the Drumnaph Woodland, it was unlike any other house that has ever been designed and constructed within rural Northern Ireland, he says.

“The primary structure is made of four 45ft shipping containers, merged together to form two large cantilever forms,” says Patrick.

It has become the family residence for the architect, his wife Victoria and their two children, Evelyn, two, and Elijah, five months — and Patrick has also since purchased two more containers to create an office.

At the time he approached the drawing board with his idea for his forever home, these structures met his desire for minimalism and sustainability.

“When I used containers in my own house, I just wanted to push myself to the limit. And I did it,” he says.

Patrick was ahead of his time, orienting the build to maximise the views over the landscape and create what he describes as “inside-outside living using large sliding doors to an external patio and chimney providing a functional family dwelling on the family farm”.

This creates a sculptural form which marries beautifully into its rural setting, adds Patrick.

“If we don’t push the boundaries we walk backwards,” he says.

“It’s like every project I design. I go into a level of depth to fulfil every client’s wishes. And the challenge for me is also how each project will sustain itself for the rest of its life.”

And Grand Designs presenter Kevin McCloud was to name the Northern Ireland residence as his all-time favourite property featured on the long-running series.

To celebrate 20 years of the hit Channel 4 programme, McCloud revealed his top five builds from the show in a commemorative episode, Kevin’s Grandest Design, which aired in 2019.

The series host revealed that if he was pushed to choose, Patrick’s property was “probably my favourite”.

Revisiting the property in 2019, McCloud said it was as if “into the fairy kingdom has landed, quite gently, something from Battlestar Galactica” and that the innovative build “hasn’t lost its magic”.

But the presenter admitted that, at the time, he had thought the project was “a disaster in the making”.

Happily, Patrick tends to prove the critics wrong and his rural hideaway in the woodland near Maghera has scooped numerous awards.

“I try to think so far ahead, that the right decision now will last longer than the idea of people creating very large properties with this massive wish list for ‘now’, and maybe 10 years’ time,” says Patrick, who has also since starred as a judge on RTÉ’s Home of the Year TV series.

“I design properties to last a lifetime, but at the same time never go out of date. I try to do that for every client.

“I like to discover their thoughts, dreams, wishes — but, kind of also, seeing into the future. It’s a hard thing to do.”

Did he ever foresee embarking on his adventures in television?

“No, prior to ‘Grand Designs’ I had never planned to be on TV — but then I thought: Why not try it?” he says.

“I had to work with the budget and before I knew it, everything was on top of me! So, I just ran with it. It [‘Grand Designs’] reaped a lot of rewards for me and turned out to be one of the best decisions I ever made.”

Patrick says he “owes” a lot to Grand Designs — not least his first encounter with his wife Victoria.

Originally from South Africa, Victoria was living in London when they met. “I had an office in Chelsea and Victoria had seen me on ‘Grand Designs’,” he says.

They now share a home they both adore. “You should be able to walk into a house and feel like you’re on holiday,” adds Patrick.

“Life should be enjoyed from morning to night. And projects and houses should be designed with that methodology.

“There are never two sites the same. We don’t all go out and get the same pair of jeans, we just need something that makes us happy, a roof over our heads.

“We don’t need to fire all our money into a house — as crazy as it sounds for an architect to say that.

Firing all your money into a house? It’s absurd. A house should be a holiday, a pleasure.”

Good design and sustainability and a small carbon footprint are key, he believes.

“Houses should not be big. We only live in certain areas of our house,” adds Patrick.

“My house has everything: Three bedrooms, an open-plan living area, an ensuite with the master bedroom, a bathroom, and a bootroom.

“It’s 1100 sq foot and is all designed around the way I live and work.

As for his and Victoria’s favourite space in their home?

“It’s not a cliché to say we live every part of it,” says Patrick.

“I thought of every room, every part of the house, every aspect of every day, every month, while designing it so it just feels that we’re always in a happy place.

“We have everything we need. It’s not a big house. It’s very easily run.

“To be honest with you we wouldn’t change a thing. I’m very happy.”

HOW TO CAPITALIZE ON SECTION 321 TYPE 86 U.S. CUSTOMS ENTRIES