EVERETT, Wash. (BRAIN) — Like all bike companies, Rad Power has struggled to deliver enough bikes to meet demand for the last year and a half. But the Seattle-based consumer-direct powerhouse recently trimmed weeks off the transit time for its e-bikes by using an alternative sea port.

The company’s solution was visible to anyone watching the Port of Everett on Monday afternoon when the 111-meter (365-foot) cargo ship Eemslift Nadine arrived carrying 64 containers of Rad Power products. The Eemslift Nadine left Taicang, China, on June 24.

Rad Power expected to have its containers unloaded and the products in its warehouse by next Tuesday. From factory door to U.S. warehouse, that’s about 54 days faster than if it had shipped with a larger vessel into a major port, Rad Power COO Mike McBreen told BRAIN.

Rad Power hast typically used the Seattle port, but in the last year, it has been backed up for weeks, with lines of ships waiting to unload cargo. Those delays aren’t far from the only factor contributing to bicycle product shortages, but they contribute significantly.

From factory door to U.S. warehouse, that’s about 54 days faster than if it had shipped with a larger vessel into a major port, Rad Power COO Mike McBreen told BRAIN.

McBreen lives in the hills just above the Everett port and he could see what was happening with his own eyes as he pedaled his Rad Power around the area.

The Everett port, less than 40 miles from Seattle’s, generally handles smaller ships and “breakbulk” cargo: goods that are not necessarily in standard containers, but are on pallets, bags, boxes, crates, or are just oversized large items like trucks and steel girders.

“I was riding one morning and I looked down and there was a breakbulk ship parked at the terminal and then in the distance there was a cargo ship that had been parked behind our house for about a week waiting to get a berth to go into the port of Seattle,” he said.

McBreen set out to determine how to get Rad Power bikes on the smaller breakbulk ships that could use the Everett port. 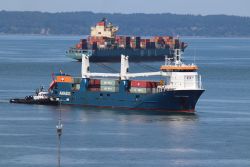 He was well-equipped: McBreen has spent his career working in supply chain, for Nike, Wolverine, Payless Shoe and other companies before joining Rad Power about a year ago.

“I reached out to a couple of shipping companies and then talked to some vessel owners that do this for a living. That eventually led to an opportunity to use these utility lift ships as an alternative supply chain that both adds capacity to the global network and allows us to use a different port that wasn’t being used and overcrowded like Long Beach, Seattle, and Vancouver. It was a matter of thinking differently,” he said.

Ultimately, Rad Power chartered the Eemslift Nadine, sharing space with a machinery company whose cargo will be unloaded at Long Beach. The company had to arrange to purchase containers outright, rather than using containers that belong to the shipping company. (Rad Power plans to sell the containers immediately to a third party).

On the China end, Rad Power had to arrange to have the bikes shipped from the Taicang port, instead of a more common larger port like Shanghai.

McBreen said the alternative shipping method added 35% to the company’s regular shipping costs, but he said it was worth it in the current climate and the company isn’t increasing retail prices as a result.

He expects to use the same method several more times this summer with several cargo ships arriving in September.

Rad Power is one of the fastest growing consumer direct e-bike brands in the U.S., and probably the largest. It brought in a $150 million investment last winter.

To diversify its sourcing and to escape the tariffs that the U.S. imposes on Chinese e-bikes, the company is increasingly moving production to Vietnam and Cambodia, McBreen said.

Rad Power is notable for using standardized components, including motors, batteries and drivetrain parts, on many of its models, simplifying production and inventory. McBreen said that practice has helped it during the pandemic sales surge because Rad Power has been able to make large long-term contracts with the suppliers of its batteries and motors, for example. Still, he said the company has begun to diversify its components somewhat in an effort to be less vulnerable to shortages, and upcoming models will reflect that.

With the wisdom that comes from a career in the supply chain, however, McBreen said he’s cautious to remain humble.

“This is where the humility comes in: You may think you have it figured out but then anything that can possibly get in the way will materialize, and you’ll have to deal with it.”