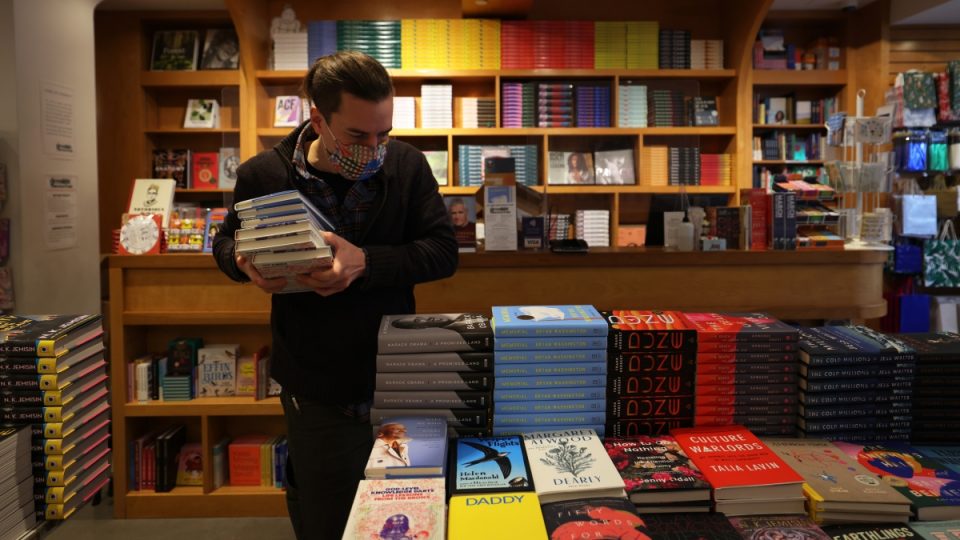 It’s been a bumpy couple of years for book publishers and retailers. Demand for print books spiked early in the pandemic, just as the business of making them was complicated by a paper shortage and other supply chain problems.

We heard last year that was cutting into profitability during the industry’s most important time of year — the holiday shopping season. So how’s it holding up now? I visited a shop in New Mexico to find out.

On a retail block in downtown Albuquerque, Red Planet Books and Comics stands out. A colorful outer space scene is painted on its storefront, like the cover of a sci-fi graphic novel. Store manager Aaron Cuffee said there’s something else unique about the shop.

“This is the most comprehensive and arguably most impressive display of Native comics anywhere in the world,” he said.

One of its newest book titles is “A Howl” — “themed all around wolves, werewolves and rougarou,” he said. That’s a shape-shifting monster that shows up in stories from Metis communities in Canada.

The book is “selling like hotcakes,” Cuffee added. “I just shipped out 12 of them today.”

Those customers have been waiting a while for the book. It was supposed to debut over a year ago, but its publisher, Lee Francis, said that didn’t pan out.

“It just kept getting pushed back further and further,” he said — all the way to spring 2022.

“It’s just made us adjust our timing. So mostly now, just straight out the gate, we’re looking at — when we start presales — that it’s gonna be three months,” he said.

For that werewolf anthology, the delays stretched past what would have been an important retail window between Native American Heritage Month and the holidays.

It wasn’t the only casualty, said Kristen McLean, an analyst with NPD BookScan.

“The worst-case scenarios were happening,” she said. “You were seeing things like books that were specifically tied to holidays not make it into the stores in time.”

Ahead of this holiday shopping season, McLean said some of those supply chain snags are smoothing out, and the industry is adapting to the ones that aren’t.

“Printers in the U.S. are at capacity,” she said. “Publishers are having to change their expectations about how long it takes to get a book made.”

“You know, it being especially important for us to let people know, ‘Hey, we ordered the books for you, but we just got a note from the publisher, the distributor. It won’t be here for six months.’”

Red Planet started ordering holiday inventory in August this year to make sure it has plenty on its shelves. It’s encouraging customers to get their gift orders in early too.

There’s a lot happening in the world.  Through it all, Marketplace is here for you.

You rely on Marketplace to break down the world’s events and tell you how it affects you in a fact-based, approachable way. We rely on your financial support to keep making that possible.

Your donation today powers the independent journalism that you rely on. For just $5/month, you can help sustain Marketplace so we can keep reporting on the things that matter to you.

A defining moment in our medical supply chain crisis