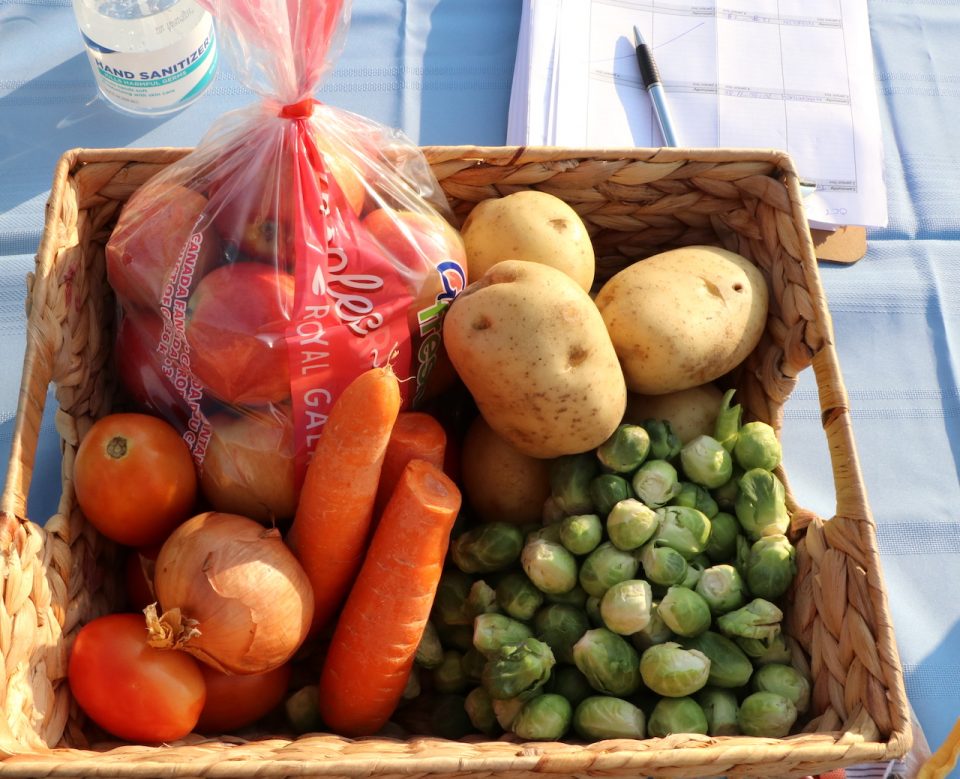 MERLIN — Heather Tulloch balances on a low cement riser beside the long, white-sided single-storey Royal Canadian Legion building. She’s eating the quiche she made the night before for lunch.

A couple of metres away stands Mike Lindley, a Chatham resident. He’s a volunteer helping Tulloch, a community food connector with the Chatham-Kent Prosperity Roundtable, hand out food boxes as part of the mobile “miracle market” program.

Launched in late September, the mobile market — an extended white cargo van emblazoned with its sponsoring service clubs’ logos and the logo of the owner, the non-profit Family Service Kent — stops in 12 communities throughout Chatham-Kent over a period of three days a week to provide residents with fresh produce at pay-what-you-can prices. The current week’s target: to distribute 135 boxes of fresh produce offerings, such as Brussels sprouts (donated by a farmer near Pain Court) and Ontario carrots (sourced from a Chatham wholesaler). Any remaining food will be donated to local charities.

Both Tulloch and Lindley watch for customers, but for the first half hour of the hour-long stop, the gravel parking lot remains empty. The pair chat about movies, while above them, five turkey buzzards surf air currents.

Stay up to date!

Get Current Affairs & Documentaries email updates in your inbox every morning.

Just as Tulloch fesses up to Fried Green Tomatoes being a favourite, two women arrive in a minivan.

Tulloch and Lindley don their face masks and get to work: Lindley greets the women — Lana Peters, 72, and her daughter, Kristina Ritchie.

Three weeks in, Peters and Ritchie are already program regulars. With last week’s box, which contained red cabbage donated by a local farmer, they made coleslaw and cabbage casserole. “I still have a few pears left,” says Peters as she hands over $10 for this week’s two boxes.

Such food-box programs can be found in a number of Ontario communities, such as London, Sudbury, Lambton County, and Grey and Bruce Counties. They’re aimed at addressing food-security issues by providing fresh, usually locally or Ontario-produced fruits and vegetables to subscribers at regular intervals for a set fee, one lower than what they would go for at a grocery store. What sets the new program in Chatham-Kent apart, says Tulloch, is not only the number of communities it serves — the area it covers can take nearly an hour to travel on local roads — but also its mix of rural and urban locations.

“Other projects [elsewhere] are more urban focused,” Tulloch explains. In Chatham-Kent, the issue is that some smaller communities don’t have grocery stores — or even variety stores.

Despite the high level of agricultural activity in the area, “it’s beyond food desert,” she says, adding that much of the food grown in the municipality goes to food processors and grain elevators and is “totally inaccessible to us as eaters.”

Unlike many similar programs that charge a set fee to cover the costs of operation, this one uses a pay-what-you-can approach. “Rather than targeting folks that are the most needy, per se, we’re trying to blanket the entire municipality,” Tulloch says. “We’re balancing those folks that can’t pay with folks that can.” Some customers, she notes, have volunteered to cover costs for those who can’t afford them.

A $25,000 federal grant helped launch the program, and the local United Way and the community foundation provided additional funds. That’ll be enough to keep the program running for six to seven months, covering the cost of food purchased from a local wholesaler and the operating costs of their van, says Tulloch — rather than introduce a set fee for buyers once the money runs out, the goal is to continue the program through pay-what-you-can purchases and funding.

Debbie Field questions whether that approach will be sustainable. Field coordinates the member groups of the national Coalition for Healthy School Food; during her 25-year tenure as executive director of FoodShare in Toronto, she helped pioneer the good-food box in Canada. She notes that most food-box programs have waived fees during the COVID-19 crisis, but only temporarily. And there’s good reason for that, she says: “I think there’s COVID and the crisis of COVID, and then I think there are sustainability issues beyond charity to getting something that’ll work forever. So anything that is just charity seems to me to be something that we don’t want to entrench forever, or we have another version of a food bank.”

She’d rather see a program that would put 10 seasonal items, at fixed prices, on the shelves of grocery stores, corner stores, and even gas stations; the government would subsidize the difference between the actual cost of production and the sale price. The approach is similar to one adopted in Kerala, India, where, for 30 years, the government has subsidized the cost of imported rice and beans. “They made it all available at $1 per kilo everywhere,” she says.

Field says that Canada needs such a program because very few places have year-round access to fresh, local, or even imported produce at affordable prices. “The wealthiest people in Corner Brook cannot get broccoli for under $6 or $7,” she says. “We have a huge crisis when it comes to food access in our country; we don’t prioritize access to healthy food.”

Jennelle Arnew, Chatham-Kent’s public-health nutritionist, is optimistic that money and supports will be found to continue the initiative. “We’ve used that for our student nutrition program, and we’re able to provide programs in all of our publicly funded schools on a similar idea,” she explains. “And then we also get support from community organizations and businesses and grant dollars to support the program.”

On the ground, the program’s benefits extend beyond providing fresh fruits and vegetables, says Tulloch. Recently, she recalls, she helped a woman work out an internet problem. “It’s a first step of access,” for people who may need help, she says, and a chance to connect with “an actual person and not just a phone call.”

Fostering connection is something that also motivates Lindley. During a drop-off in Wheatley the week before, he chatted with a retiree who used to be involved with community funding: “We just talked about how everything kind of comes around that,” he says. “When you can, you give, and hopefully someone’s there to help you out when you need some help.”

Back in the gravel parking lot in Merlin, Peters says it’s the access to fresh produce that keeps her coming back: her town lacks a grocery store, and she’s on a fixed income. If the service weren’t available, she says, she’s not sure what she would do: “Go without, otherwise.”

This is one in a series of stories about issues affecting southwestern Ontario. It’s brought to you with the assistance of faculty and students from Western University’s Faculty of Information and Media Studies.

Ontario Hubs are made possible by the Barry and Laurie Green Family Charitable Trust & Goldie Feldman.

In the short term, Demand for EVs will Likely Grow More Rapidly than Demand for Conventional Vehicles