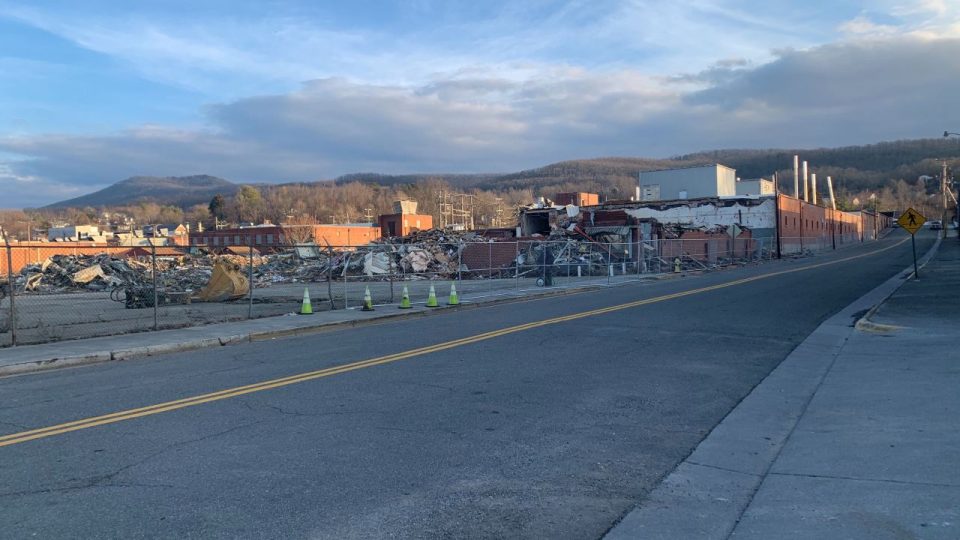 PULASKI, Va. (WFXR News) – History of what used to be a thriving industry and one of the main employers, Jefferson Mills factory in Pulaski is being torn down.

It’s unclear at the moment what will go in its place but with recent growth and development, the area has seen many are hoping for something to help the town thrive once again.

The thinking is basically, out with the old and in with the new. While it’s bittersweet for some to see it go, the factory has been closed for many years and the building was deteriorating.

“I went to work for Jefferson Mills when I got out of high school in ’65,” said Frances Sutphin.

She worked in the Hill Plant next to the main building that’s being torn down. She says Jefferson Mills was a big employer and her mother even worked there before she did.

“It was a big industry for Pulaski for many years,” Sutphin said.

But it closed and recently the building has sat empty for years.

“The longer the building sets, the worse it’s going to be. It’s going to get run down,” Sutphin said.

“We’re like a lot of small manufacturing towns. When the manufacturing left, it leaves a gap that’s very hard to fill. And because of that, you have to reidentify who you are and find a new place in the world,” said Pulaski Mayor David Clark.

Now the old factory building is going away and Pulaski is in the process of new growth and development. The mayor says before this teardown started, they already had Community Development Block Grants to redo old buildings and homes.

“What we’re going to become is small businesses, quality of life, things for people to do and a reason for people to want to live here,” Mayor Clark said.

Demolition on the factory started last week and it’s still unclear what the space will be used for.

“In some ways, it’s sad to see the building leave, but in other ways, it’s a promise for the future,” Clark said.

“If they can bring some industry, or I don’t know if it’s going to be industry, it may be a business. We could use the retail business here in Pulaski really bad, so if they can do something like that, that’d be wonderful,” said Sutphin.

The development company that owns the property where Jefferson Mills was, has also done other projects in the town, like the Jackson Park Inn.

People in Pulaski are hoping to win a makeover for the town on an HGTV reality show. This past weekend hundreds gathered to film a flash mob. The dance will be part of their audition video to try to have their town selected. The woman spearheading the efforts, Robin Burdette owns the Blue Ridge Fudge Lady shop in downtown.

“So many people showed up. Oh my gosh, I cried a lot that day. We hoped for a few hundred, but I’d say we probably had about 600 here wearing we love Pulaski shirts,” said Burdette.

The flash mob was just one part of their application video. They hope to have the video finished soon so they can enter the contest.

Get breaking news, weather, and sports delivered to your smartphone with the WFXR News app available on Apple and Android.

Commentary: Electricity in Indonesia getting more expensive thanks to climate change

Olivia Rodrigo’s ‘Sour’ tour coming to the Factory | The Blender