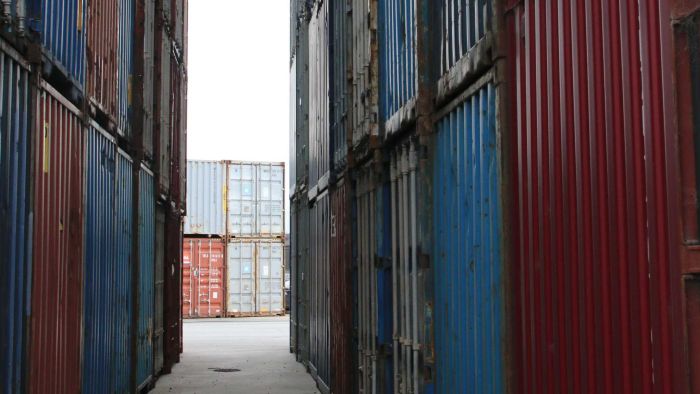 Agricultural businesses are grappling with significant increases in international freight costs amid fierce competition for space and ongoing disruption to pre-COVID travel arrangements.

Tasmanian rural equipment and feed supplier Tony Williams said a container from China was US$6,000 more expensive than the highest price he had ever seen in his 15 years as an importer.

“It’s not really a China trade issue. It’s shipping lines taking advantage of us,” he said.

Mr Williams said higher freight costs added about $12 to a single cattle panel while delays meant he was “ordering further and further in advance and then hoping it turned up”.

“We get told it will be here in October and it arrives in late December,” he said.

Mr Williams said he understood why shipping lines had “put ships off” in the early days of the pandemic as factories shut and freight bookings dried up.

“But I think they’ve had more than enough opportunity to put more ships back on to solve this issue,” he said.

Navigating the changes to trade

“Shipping lines are going to adjust wherever they can to get the best margins. They’re not altruistic,” he said.

“It’s frustrating for the importers and exporters to deal with, not just the constant shift of ships changing schedule, capacity, freight rates, but also to try to tap into where their markets are going to be due to the changing markets around the world.”

Mr Charlton said the ongoing disruption to the pre-COVID arrangements might prompt changes to the reliance on the “just-in-time” cargo model.

He said businesses might implement larger buffers for transportation time or keep an “emergency supply” of stock in Australia “rather than relying on manufacturing and shipping to be exactly as it used to be”.

Mr Charlton said shipping lines were commercial entities and had their own considerations, such as money lost in previous years from industry competition and costs racked up at the start of the pandemic by stranded ships.

“They had costs they had to take up during that time, and on top of that they have crews and have to work out how they can manoeuvre crews across the world,” he said.

“Shipping lines are having their challenges but there’s no denying they are making significant profits at the moment.”

The shipping squeeze comes amid ongoing concerns about the cost and availability of air freight, particularly for perishable goods.

The state and federal governments have tried to relieve pressure by supporting new freight flights, such as the service between Hobart and Hong Kong launched in December.

Abalone exporter Alex Cuthbertson said these initiatives had helped alleviate export costs on some routes but not all.

He said some shipments to Taiwan, for example, had jumped from $5 or $6 a kilogram to $14.

“The freight costs are definitely up. Some shipments have gone up 100 per cent,” he said.

“There’s less freight, fewer planes. So, they can pick and choose what they want to take where.”

The dramatic drop in passenger flights due to ongoing travel restrictions is a key factor as those flights once carried significant volumes of international freight.

Get the latest rural news

“Everyone’s fighting for space and the smaller number of flights available now to these markets compared to what we’re used to,” he said.

“We had the choice of probably 10, 12 flights every time we wanted to go out to export. Now we are down to one.

“And we’ve had instances where we’re just about to load product, and the flight would get cancelled, or we’d get bumped.”

“In the past, I suppose, cargo has been subsidised quite heavily because of the passenger numbers,” he said.

“I think the days of seeing cheap air freight rates out of Australia have certainty gone for quite some time.

Mr Fox said some former passenger flights were now being used solely for freight and that was “not the most economical way to move cargo”.

He said the air and sea freight environment remained “quite volatile” and expected the next year to bring “a lot more of the same, unfortunately”.

“It will quieten off a little bit around the April period, and we’ll just re-evaluate to see where things are,” he said.

“But I believe for the next 12 to 24 months we’ve got this really rough road.”