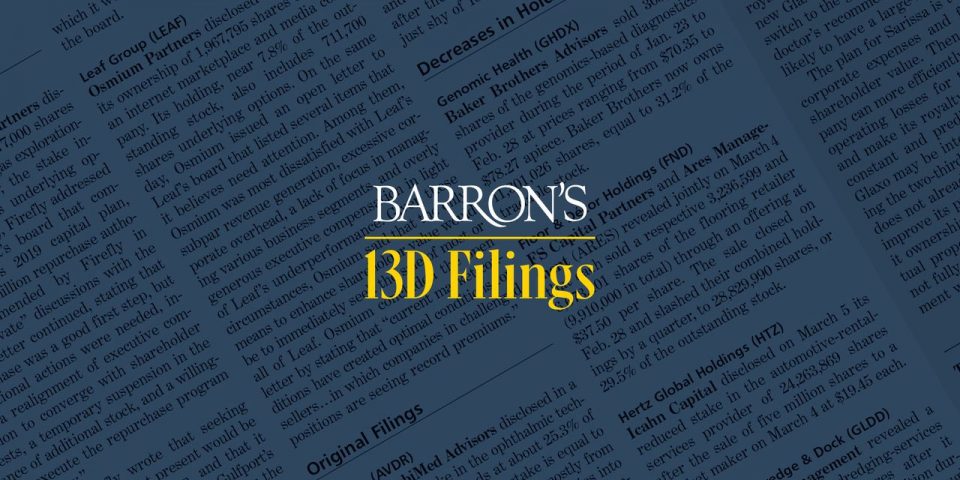 
These disclosures are from 13Ds filed with the Securities and Exchange Commission. 13Ds are filed within 10 days of an entity’s attaining more than 5% in any class of a company’s securities. Subsequent changes in holdings or intentions must be reported in amended filings. This material is from Dec. 31, 2020, through Jan. 6, 2021. Source: InsiderScore.com

Alden Global Capital disclosed that it wants to take the media firm private through a proposed offer of $14.25 per share. Alden is currently the largest Tribune Publishing shareholder, with a 31.6% interest, equal to 11,554,306 common shares. Alden’s proposal is nonbinding, and Alden has “not proposed any specific structure for the transaction, nor [has Alden] received any feedback from” Tribune. Alden further noted that on Dec. 11, it had a “brief conversation” with Stewart Bainum Jr., the current chairman of

(ticker: CHH). Bainum had approached Tribune with “interest in respect of certain assets of Tribune,” and Alden believed that a joint venture with Bainum “may be worth exploring for all interested parties.” However, Alden noted that a rights agreement with Tribune may restrict such a deal.

General Atlantic Partners cut its holding of the Hong Kong–based electronic brokerage and wealth management firm by nearly 21%, down to 26,306,664 American depositary receipts. General Atlantic sold a total of 1,500,000 Futu ADRs from Nov. 23 through Dec. 31 at prices ranging from $45.04 to $49 apiece. No reason was cited for the latest sales, which now leave General Atlantic with an equivalent 4.9% stake in Futu’s ordinary A shares.

Icahn Capital disclosed that on Jan. 3 that it had entered into a stock-purchase agreement with the nutritional-supplement maker. Herbalife agreed to repurchase 12,486,993 shares from Icahn at a price of $48.05 each, leaving Icahn with 8,018,886 shares. No reason was given for the transaction that reduced Icahn’s interest in Herbalife to 6.7%. Herbalife said that pursuant to a 2013 support agreement, it agreed to give Icahn affiliates five board seats for as long as it held at least 14 million Herbalife shares. With the transaction taking Icahn’s holdings under the threshold, all five director designees previously nominated by Icahn resigned on Jan. 3, 2021, and the support agreement was terminated.

how ‘Silicon Savannah’ is a hub of creativity, tech and impact

2021 RFID Trends Will Include Greater Supply Chain Focus and EAS