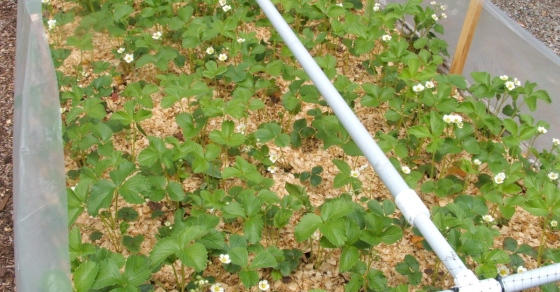 The neighbourhood has become a hotbed of gardening fervour. Three households, all a few steps from my home, have been bustling with planting zeal.

Next door, Jan’s greenhouse is jammed with transplants. Great mounds of topsoil sit at the top of her driveway. She’s a new neighbour, just starting out growing vegetables.

Directly across the street, Kim has set up a most attractively neat food garden, mainly in three long raised beds. Each of the beds has recently been surrounded with short walls of clear plastic, not to protect the plants from bunny munching but to keep them from being sprayed by Kim’s endearing white and brown spaniel Sebby (short for Sebastian), who found the sides of the raise beds irresistible leg-raising targets.

One of the beds holds a fine planting of strawberries at one end and a combination of healthy young kale and romaine lettuce transplants at the other.

At an end of the centre bed Kim has placed a pallet that her next door neighbour gave her. That neighbour has also embarked on food gardening and is growing some of Kim’s extra strawberry plants.

On the pallet Kim has set two large pots, each with a robust, flowering Aloha strawberry plant. Aloha is a red-seeded white strawberry. This type of strawberry is also known as pineberry for the pineapple-strawberry flavour.

Kim has rolled down the rims of the bags so that, as the plants elongate, she can unfurl them bit by bit as she adds more planting mix around the growing potatoes. All being well, the process should give her bags full of tubers to harvest at summer’s end.

Pea problems. There have been issues, however. Kim set up trellising for peas in the centre bed. The edible podded peas at an end trellis looked good. The plants were deep green and healthy. Across the middle of the bed, the shelling peas were not so fine. The young plants were weak looking, slightly yellowed, and clearly lacking in nitrogen.

The soil in that part of the bed looked as though it had a fair amount of shredded woody material in it. That could have created a deficiency as nitrogen in the soil became temporarily tied up in breaking down woody matter.

Watering with a fish fertilizer solution will help. I noticed Kim had bought bags of fish compost. A modest side dressing of the plants with this soil amendment will also help.

However well peas are doing, another traditional gardeners’ practice is to cultivate lightly alongside rows of developing pea vines to introduce fresh air to the roots. I use a claw cultivator for this. Pea roots thrive in a well aerated soil.

Spinach woes. A small patch of spinach looked more than a little pathetic. The plants were shrunken little rosettes of stunted leaves. This is what spinach does in acidic soils. The soil in that part of the bed had not been limed. Kim had some Dolopril, a fast acting, granulated form of dolomite lime, on hand to scratch into the soil. I’m not sure the current plants will correct course successfully, but subsequent plantings will.

Youth and nature. Occasionally I receive emails describing current activities of the David Suzuki Foundation (davidsuzuki.org). One of these, geared to young people at home from school this spring, is a “Connecting Youth with Nature” program with activity guides.

A project described in one email would appeal to children and youth in a broad range of ages. It’s a “Paint with Nature” project that invites young artists to paint smooth rocks with images of a child’s choice — a sun, a smiley face, kite, or an animal perhaps.

The children might place the painted rocks around a favourite tree, in their own garden plot or in a container they have planted. They are advised to use a low- or no-VOC (volatile organic compound) paint to protect the environment.

Based on Product, Application and Region – Cole Reports