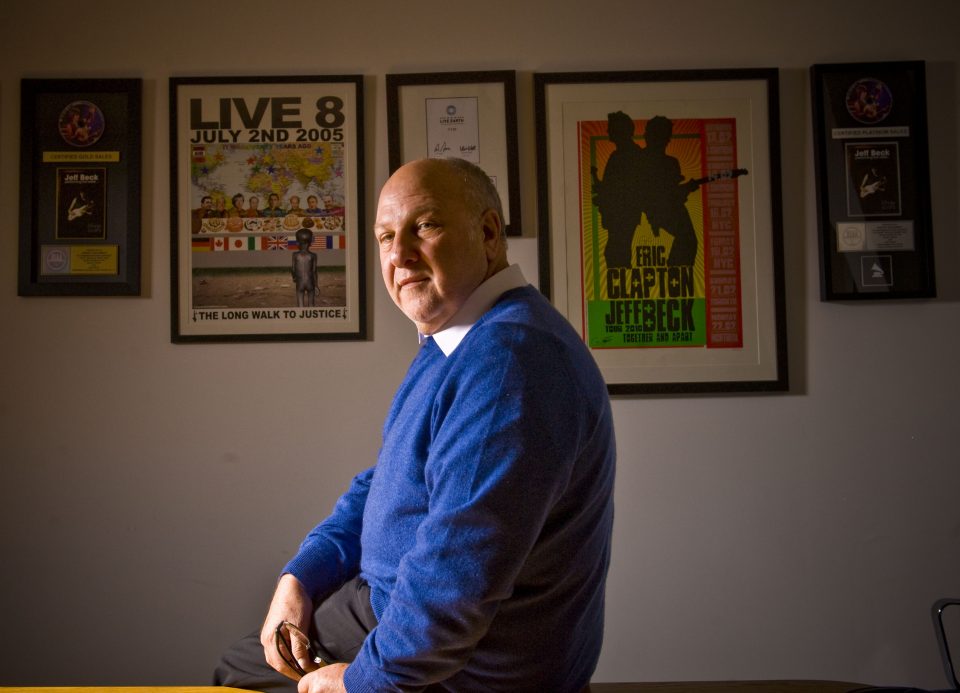 Veteran concert promoter Harvey Goldsmith, who famously organised Live Aid alongside Bob Geldof, has supported the One Industry Once Voice (OIOV) campaign with an opinion piece in the Express newspaper today, 20 November. He tells Access why Government should engage with a single group representing the entire events industry.

A 50-year veteran of the live music industry, and one of its most respected figures, Harvey Goldsmith tends to get listened to when he opines. The events industry will be hoping his passionate opinion piece in the Express will be heard by Government.

“I really felt it was time to say something because the media know who I am and will give me space if I want it,” he says.

Goldsmith, who has promoted shows by some of the world’s biggest acts, including The Rolling Stones, The Who, The Eagles and Bruce Springsteen, pointed out in his Express piece that nothing he has experienced in his lengthy career compares to the turmoil created by not being able to operate for the best part of a year as the result of Covid-19.

He says there are dozens of events organisations pitching ideas to DCMS and Public Health but they are not getting answers: “The DCMS needs to sit down with half a dozen people who represent the whole events industry, including festivals, theatre, exhibitions – one group. I don’t see any other way of it working. It is absolutely pointless them saying one thing to festivals, something else to the theatre business, another thing to nightclub owners – it is a complete waste of time.

“The DCMS needs to get organised and create a group of people that represent everybody in the events industry, and have a proper discussion about how we can get back to business. There is no reason whatsoever why we can’t create bubbles of people at events where everyone has been tested negative for Covid-19 within 24 hours. That is what we want the guidance for but we are getting nothing.”

“We are not a subsidised industry; we are in the commercial world. We are getting to the point where we need a subsidy to survive but that is not what we want.”

Goldsmith echoes the point made in his Express editorial that he isn’t interested in subsidies, he wants to see the events industry given the opportunity to get back to work: “We are not a subsidised industry; we are in the commercial world. We are getting to the point where we need a subsidy to survive but that is not what we want. The quicker we can get back to business and get people employed again the better it is for everyone.”

When it comes to the subsidies already distributed, including the Cultural Recovery Fund, Goldsmith is less than impressed, as he points out in his Express piece: “The way our industry has been treated is appalling. A committee of the good, the great and the useless dished out £1.75 billion to the arts – there are so many experts in the industry who could have helped, but we were never given the opportunity.”

He tells Access, “We have the best experts in the world, people who can build a town overnight, who really understand the business; what is needed and where it is needed, but they chose a ballerina and book publisher to do the distribution. It’s nuts.”

The promoter is currently working on a Covid-safe, reduced-capacity, show at the Brighton Centre (cap, 4,500) by Jools Holland and his Rhythm & Blues Orchestra on 11 December.

“The idea is to create an atmosphere in a big space by covering the tiers over and creating a club-style show with tables, so it will feel full. There will be an audience of around 500. I want to use it as a test bed to try to create the protocols going forward but I can’t get anything out of the Government as to what will be acceptable,” says Goldsmith.

He is calling on the Government to provide a Covid-safe protocol that would be applicable for all formats of events from concerts and conferences to weddings.

Says Goldsmith, “The whole idea, as far as I am concerned, is to create a bubble within a bubble so that everyone attending an event are all tested and found to be negative before they walk in the door. On that basis I can’t see why we can’t get back to business.”

OIOV was born from an idea by creative agency Smyle’s Rick Stainton and Mash Media. It is fronted by the Business Visits and Events Partnership.

Refurbished Apple Watches: How to buy and trade