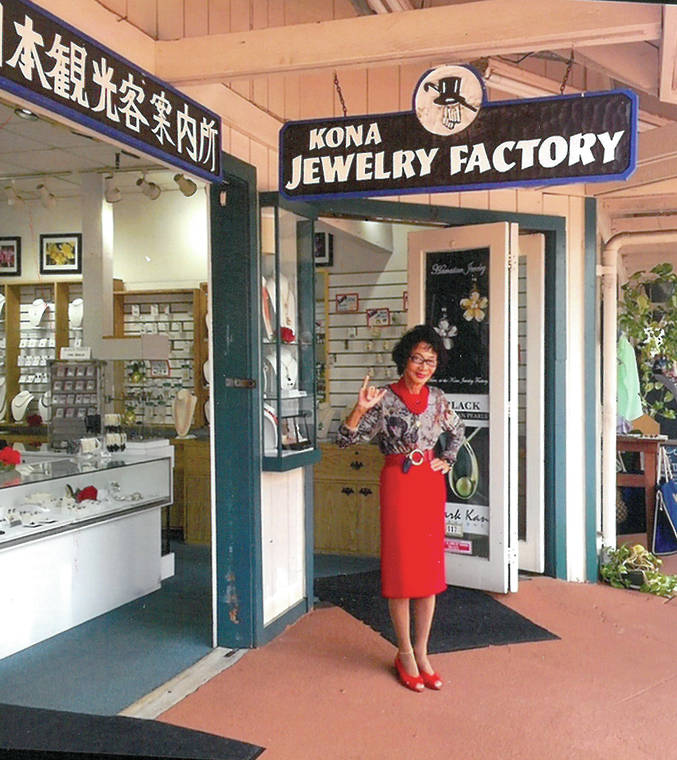 After more than three decades in business, Hanako Sheldon is closing her jewelry shop at the Kona Inn Shopping Village and beginning the process of heading home to Japan to begin her life’s next chapter.

“This is my Kona life goal and I made it,” said Hanako.

Hanako, 81, and her late husband, Bob, opened the Kona Jewelry Factory fronting in a small spot fronting Alii Drive in historic Kailua Village in 1991. It was the culmination of the couple’s search for a small spot for Bob, a goldsmith and jeweler, to showcase his work.

After being unable to find the right spot in Waikiki, the couple visited Kona, met the late Uncle Billy Kimi and soon enough snagged the site of the Kona Jewelry Factory. Sadly, not long after settling into their shop, Bob was diagnosed with cancer; less than a year later, he passed away.

Alone, Hanako was unsure if she could continue running their dream. Though she spoke little English, it was those around her that lifted her up and kept her going.

Like three of her late husband’s best friends, Kimi encouraged her not to close shop and others helped with repairs — like when the fire sprinkler system went off flooding her spot. For the next 30-some years, Hanako, with the help of a few friends, good customers and the spirit of the community, successfully operated the couple’s business.

“I cannot leave Kona without saying ‘thank you,’” Hanako explained, naming a handful of people including Kimi; Kona Hongwanji; loyal customers Mr. and Mrs. Bill Shannon from California, Mr. and Mrs. Arrington from Washington state and Mr. and Mrs. Glen of California; her few employees over the years, including Virgina who kept Bob’s line going, Lilian, Yukiko and Rie, and the many professionals who came to her aid, like Clyde of Hualalai Mechanical, her handyman, John, and hairstylist Mary for always keeping her hair kept, even during the pandemic.

But, after much reflection, Hanako now knows it’s time for her and Bob to return home to Japan. She had hoped to hold a momentous occasion on Feb. 28, to honor those who’ve helped her along the way and her husband as well, however, the pandemic has put a damper on that due to gathering and other restrictions. She will offer a host of deals at the Kona Jewelry Factory through March.

“This is the last one for my husband and the most important event in my Kona life,” she said. “I was planning (a large event) but (because of) this corona(virus), I couldn’t invite all of the people I wanted to — but fortunately I can express my appreciation so I am very thankful for that.”