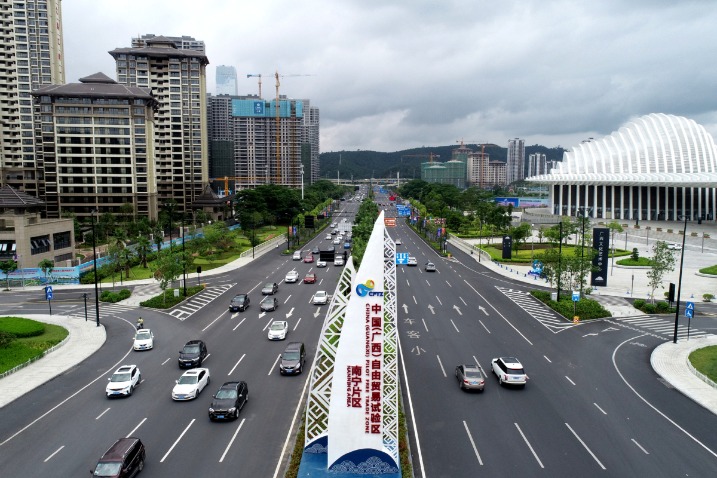 The Guangxi Zhuang autonomous region, a key crossroads providing western China with full access to global markets, will help expand the Belt and Road Initiative and support China’s opening-up in the 14th Five-Year Plan (2021-25) period, said Lan Tianli, chairman of the region and a deputy to the National People’s Congress.

Early this month, 40 containers of pulp for paper manufacturing departed Brazil by ship, bound for the Port of Qinzhou in Guangxi. The pulp then arrived in Chongqing by train, which required just two days.

In the past, the shipment from Brazil was delivered to Shanghai. But the trip from Shanghai to Chongqing would take about three weeks to make its way up the Yangtze River, according to Chen Feng, general manager of the marketing center of COSCO Shipping Specialized Carriers Co, which handles logistics for paper pulp.

The land-sea corridor was launched in 2017 by China’s western regions and member states of the Association of Southeast Asian Nations.

“Guangxi borders ASEAN member nations on land and sea, and it has a unique advantage for opening-up by linking 11 countries and boosting exchanges,” Lan said. “In the 14th Five-Year Plan period, Guangxi will accelerate corridor development, with the goal of making it the channel with the shortest travel time, best service and cheapest price between China and ASEAN.”

With use of the land-sea corridor, more inland cities have benefited from stronger connectivity between China and ASEAN, Lan said. The corridor has been gaining steam, as it offers faster, cheaper and more convenient intermodal freight transport that gives western China easy two-way access to the globe, drawing in more countries as trade partners.

In 2020, the number of train trips originating or terminating at Beibu Gulf ports in Guangxi reached 4,607, up 105 percent year-on-year－about 25 times higher than in 2017－according to the regional government.

The gulf ports collectively represent the second-largest port operation in South China after the Port of Guangzhou, and now feature shipping routes to all the major ports of ASEAN members and more than 200 ports in 100 countries and regions.

Lan said based on current growth, Guangxi will upgrade infrastructure and the customs clearance process at ports, and more railways will be built to expand the corridor’s logistical capabilities.

“Guangxi is capable of playing a bigger role in boosting the BRI, and we will stick to a development strategy driven by opening to the world,” he said.

The Beibu Gulf, an international rail-sea portal, has led to deeper cooperation between two broad sets of trading areas－southwestern, northwestern and south-central China on one side and ASEAN member states and BRI countries on the other.

In the 14th Five-Year Plan period, Guangxi will continue to construct the New International Land-Sea Trade Corridor, upgrade all platforms related to opening-up, better serve the BRI with a focus on ASEAN and provide a new growth engine for development of China’s western regions, he said.

As the region of China nearest to ASEAN members, Guangxi has been a major partner for the organization’s 10 member states. This has included offering preferential policies involving China-ASEAN cooperation and building industry zones to boost the trade.

As an example, the China (Guangxi) Pilot Free Trade Zone, launched in 2019, has attracted about 19,000 companies from home and abroad, and its foreign trade reached 158 billion yuan ($24.2 billion) last year.

The wonder material we all need but is running out

Red tape is back post-Brexit, but will it be ready? – BBC News