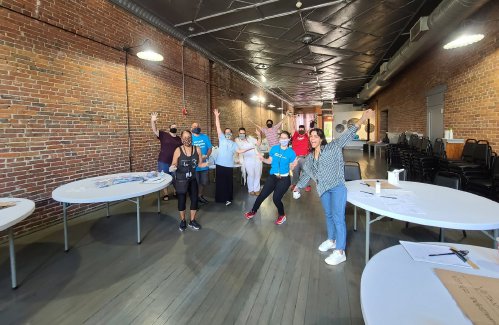 HOLYOKE — Many people across western Massachusetts lack access to nutritious, affordable food. And that problem could soon get worse.

An estimated 54,310 people experienced food insecurity in Hampden County in 2018, representing a food insecurity rate of 11.6%, according to the group Feeding America. And amid the ongoing COVID-19 pandemic, some worry food insecurity could deepen. Massachusetts continues to see mass unemployment — 26,755 workers filed unemployment claims for the week ending July 4 — with generous federal unemployment benefits set to expire at the end of the month.

It is amid that context that a coalition of grassroots organizations has created a free food distribution site in Holyoke on Wednesdays from 3 to 5 p.m. at El Mercado, 413 Main St.

“It’s always a need,” said Katie Talbot, the Holyoke organizer with Neighbor to Neighbor, which has partnered with the Pioneer Valley Workers Center, Nueva Esperanza, the South Holyoke Neighborhood Association and Dream Club to organize the weekly distribution. “Once we really start to see what the economic fallout of COVID is, what’s going to probably get cut (are) the social services to fill in those gaps.”

Anybody who showed up at the distribution on Wednesday would have seen corn, squash and cucumbers, snacks and non-perishables, as well as staples like rice, beans and eggs, according to reporting from Holyoke Media. The organizers were even handing out recipes with the kale they were distributing.

The food was donated by Red Fire Farm in Montague as well as the store Deals & Steals.

The distribution is part of a mutual aid network organized by the Workers Center, which has scaled up those efforts in the wake of the pandemic and is now distributing food in four area cities on a weekly basis.

Workers Center organizer Andrea Schmid said her organization views the food distribution as solidarity, not charity. The events bring people together, and they are encouraged to participate in the process and connect with one another.

“We want people to get involved and think about what issues communities are facing,” Schmid said. “We’re seeing the state fail us in so many ways, and we know we’re the ones who can take care of each other, we’re the ones living here and building relationships with each other.”

Schmid said that the network started as a monthly food distribution event in Springfield, where lots of the Workers Center members — many of whom are farmworkers — live. Because of the donations and support those efforts have received, the organization has been able to expand the mutual aid to other communities.

Talbot noted that large swaths of Holyoke are food deserts, where adequate and healthy food is not readily available at a price many people can afford. She said that many government agencies and nonprofits have stepped up amid the pandemic, but that more would likely be needed.

“Food insecurity is going to be an even bigger deal in Holyoke,” she predicted.

Dusty Christensen can be reached at [email protected]