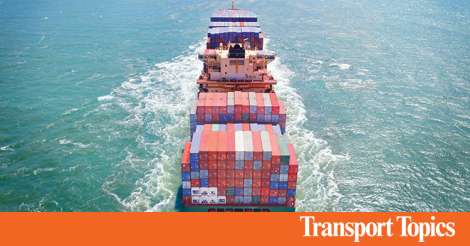 After enduring a stomach-­churning roller-coaster ride in 2020, global trade and transport continue to face substantial uncertainty as well as a host of new opportunities and challenges in the months and years ahead.

The COVID-19 pandemic has forced shippers, carriers and logistics providers to adjust to wrenching market shifts, including a deep recession, a rapid freight snapback, the expansion of e-commerce and a boom-or-bust international shipping environment.

“It’s quite remarkable to see where we are today, considering where we were just four months ago,” Paul Bingham, director of transportation consulting at IHS Markit, said in an October interview with Transport Topics. 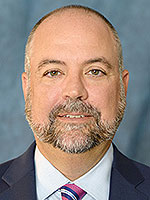 “The bottom fell out of Asia Pa­cific airfreight as early as February,” which provided the first signal of the transport disruption to come, said Donald Broughton, managing partner at Broughton Capital. “It was the canary in the coal mine.”

Air cargo tonnage in the Asia Pacific region has since rebounded to nearly match prior-year levels by the early fall, Broughton said. Hong Kong airfreight tonnage is 50% better than it was in February, he added.

Volume swings at the Port of Los Angeles illustrate ocean freight trends. The largest U.S. seaport announced that third-quarter volumes reached an all-time record of 2.7 million 20-foot equivalent units, including 961,833 TEUs in August. That was more than double March’s total of 449,568.

On U.S. railroads, the 1.42 million intermodal shipments in September marked the fourth-best month ever, and 52% greater than the freight trough in March, according to the Association of American Railroads. However, rail carload freight such as coal has recovered far more slowly, rising just 24% over the same six-month period. 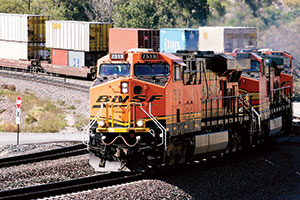 A BNSF train on the tracks in California. (Jonathan Alcorn/Bloomberg News)

Before the pandemic took hold, shippers and carriers already had been dealing with significant disruption in recent years caused by trade conflicts, higher tariffs and the renegotiation of international trade agreements.

With 2021 now less than two months away, visibility into ­global freight markets remains hazy at best. Industry experts cited a wide range of factors that will influence how the year unfolds. 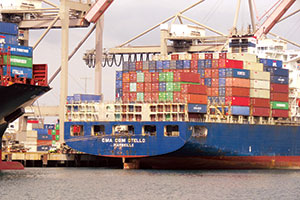 A CMA CGM containership at the Port of Los Angeles. (Seth Clevenger/Transport Topics)

The overriding questions are whether there will be another spike in COVID-19 cases, when a vaccine will become available and how it will be distributed.

“If we do not get a massive resurgence that shuts down the country, and we get a vaccine with a clear idea of when it will be there to move and deliver, 2021 could be a better year,” Cowen & Co. analyst Jason Seidl said.

Other freight experts offered a range of assessments.

“COVID will go away, probably slower than we’d like it to,” independent rail analyst Tony Hatch said.

It could be a year before Americans go back to normal purchasing patterns for services such as travel, entertainment and restaurants, he added.

Without a visible timetable, economic uncertainty will remain, experts said.

“It is extremely difficult to say what will happen to the economies of the world in the wake of a [virus] situation that we have never seen before,” Seaintelligence Consulting CEO Lars Jensen said. 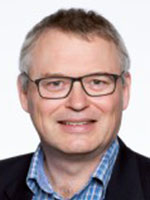 “Until there is a vaccine for enough of the population to be effective, we are going have restraints on international trade and transportation,” he said.

“We need to see more exports,” he said, so that China lives up to the Phase 1 terms. “That would be a big positive for the transportation business. They are ordering, but they are not hitting agreed upon targets. COVID is exacerbating trends that were already [there].”

The remaining differences in trade negotiations between the countries — intellectual property, services and currency manipulation — are not closely related to transport, Hatch said.

“COVID has created much greater instability in the global supply chain,” he added. “We had a great snapback, but trade flows require stability to be managed well. The distribution centers in the U.S. ­really need that.”

What is needed now is a new round of stimulus packages in the near future, similar to the successful $2 trillion program imple­mented earlier this year, ACT’s Vieth said.

“The risk of doing nothing is to see the economy stagnate and possibly contract,” he said. “Waiting until January would increase short-term stagnation risk.” 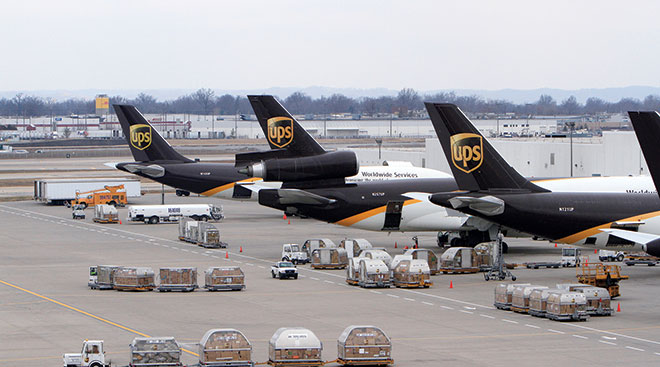 On a related note, Seidl said the coronavirus-driven stress on the supply chain shined a spotlight on infrastructure gaps — particularly in and around ports and at warehouses in densely populated areas — that could be addressed with government funding infusions.

The disruption caused by the pandemic likely will have long-­lasting implications for the freight transportation business.

“Shippers have to come to grips with the fact they are going to pay a lot more to move freight” whenever capacity constraints develop, Seidl said.

There are some signs shippers are acting to secure capacity by voluntarily paying ancillary surcharges such as detention instead of having them imposed by truckers.

The COVID-19 outbreak also accelerated a fundamental shift in ocean carrier operations, Jensen said. When demand declines in the future, ocean liners won’t repeat past patterns that led to price wars and huge losses because of industry consolidation, he said. Instead of cutting rates, shipping alliances can consolidate freight on sailings and cancel those that aren’t needed, he said. Today, three shipping alliances control more than 90% of cargo moving on the world’s two busiest routes — the Transpacific and Asia-Europe.

Jensen said the shift toward more consumption of goods rather than services has disrupted a long-term shift in the other direction.

IHS Markit’s Bingham anticipates an eventual rebound in the service sector with the exception of health care activity, which has been and will remain strong. In the meantime, deliveries of goods such as exercise equipment will help to sustain trucking because goods provide more freight density than the service sector.

Advances in technology also are poised to play an important role in the continued evolution of the freight transportation industry.

“There is a limit to how fast you can get people to accept change,” Broughton said, but stressed the importance of technology in strengthening future global production and transport.

“Technology creates productivity, which is inflation-free prosperity,” he said, citing the use of robotics on vehicle production floors as an example.

“There will be stranded assets,” he said. “[Distribution centers] and warehouses will have to be repurposed. It takes time and money to reposition those assets. There will be lease defaults and bankruptcies.”

In addition, driving schools’ capacity this year has been limited by coronavirus-related safety precautions, including some lockdowns during severe outbreaks, said Seidl, further pinching the driver supply.

Equipment capacity is shrinking too, Costello said, as fleet failures increase and carriers run fewer trucks. Year-over-year, truckload fleets are operating 3.3% fewer tractors and the count for less-than-truckload carriers is down 4%.

The implementation of a federal drug and alcohol clearinghouse already has disqualified 30,000 drivers, and 80% of those haven’t yet begun requalification, he added.

Costello believes the driver situation won’t change for at least two quarters, and probably longer than that. A new round of pay increases, however, could attract new drivers, he said.

Another specific improvement would be for railroads to improve their intermodal service, Hatch said, particularly because more than 50% of rail shipments move via intermodal. One approach he recommended was shorter, ­faster trains in addition to the longer, heavier trains that predominate now.