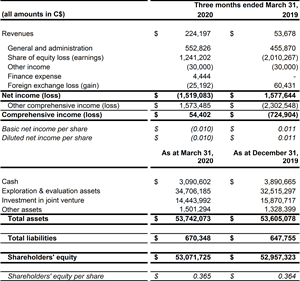 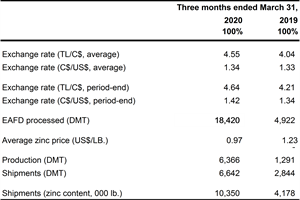 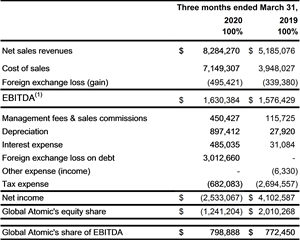 TORONTO, May 14, 2020 (GLOBE NEWSWIRE) — Global Atomic Corporation (“Global Atomic” or the “Company”) (TSX: GLO, FRANKFURT: G12, OTCQX: GLATF), the multi-asset development company with cash flow from the BST facility in Turkey and one of the world’s premium uranium development assets, at the Dasa Project in the Republic of Niger, is pleased to announce its operating and financial results for the 3 months ended March 31, 2020.

Stephen G. Roman, Chairman, President and CEO, commented, “Our first quarter was very busy despite the COVID-19 disruption, which is on-going. We made great progress on our Dasa Project technical, environmental and CSR programs, as well as hiring Ronald S. Halas, P.Eng., as our new Chief Operating Officer, in charge of moving the Dasa Project through feasibility, permitting and construction. We are excited by the recent positive move higher in uranium prices and expect the zinc market will also improve as businesses resume around the world.”

A photo accompanying this announcement is available at https://www.globenewswire.com/NewsRoom/AttachmentNg/f1e44d06-d2bd-4ea9-becb-801528f99e90

CSA Global Pty. Ltd. was engaged to prepare a Preliminary Economic Assessment (“PEA”) of the high grade Flank Zone, referred to as the Phase 1 mine plan. The results of this PEA were summarized in a press release dated April 15, 2020 and a technical report prepared pursuant to Canadian Securities Administrators’ National Instrument 43-101, will be available on the Company’s website (www.globalatomiccorp.com) and filed on SEDAR prior to May 31, 2020.

The Phase 1 mine plan developed for the PEA comprises the Flank Zone and indicates that this part of the mine could operate for twelve years, including ramp up, and at steady state mining, is planned to produce over 4 million pounds U3O8 per annum, based on a cut-off grade of 2,300 parts per million (“ppm”).

The PEA confirmed the potential economic and technical viability of uranium production at the Dasa Project as an integrated operating facility to mine and produce yellowcake on the property. Summary project metrics for Phase 1 are as follows:

The economic analysis for the PEA was done via a discounted cash flow (“DCF”) model based on the mining inventory from the PEA Phase 1 mine plan and a price of US$35 per pound of U3O8. Sensitivity analysis was carried out at $5 per pound price intervals from $25 per pound to $50 per pound, as shown in the table below. The DCF includes an assessment of the current tax regime and royalty requirements in Niger. Net present value (“NPV”) figures are calculated using a range of discount rates as shown. The discount rate used for the base-case analysis is 8% (“NPV8”). Cash flows are discounted to the start of first construction.

The PEA presents a very robust Phase 1 mine plan for the Dasa deposit based on the extraction 4.13 million tonnes of mineralised material from a sub-vertical section of the deposit on the flank of the graben, from depths of approximately 70 meters to 600 meters below surface. Value opportunities exist in extending the mine-life beyond an initial 12 years, as can be seen from the longitudinal section shown below. A large volume of mineralised material is present in the flat-lying portions of the graben between 400 meters and 800 meters below surface that could be mined in future decades. In addition, the deposit remains open along strike and at depth.

A photo accompanying this announcement is available at https://www.globenewswire.com/NewsRoom/AttachmentNg/9e8421e9-3188-49ad-a1bd-1e423718bbce

Turkish JV, Iskenderun, Turkey
The Turkish JV continued the process of ramping up production and efficiencies during Q1 2020. Underlying production statistics were as follows:

A photo accompanying this announcement is available at https://www.globenewswire.com/NewsRoom/AttachmentNg/cb532325-f1fa-4aa1-8a2e-7ad054924f3e

The zinc concentrate shipments during Q1 2020 increased by 233% over the Q1 2019 period. However, revenues only increased by 161% in the same period. This reflects the significant impact of lower zinc prices on period shipment revenues. Zinc concentrate sales are provisionally priced at the spot price on shipment and then final priced based on average market zinc prices between one and three subsequent months. Because of the decline in zinc prices, there was a negative adjustment of approximately $230,000 to revenues and EBITDA in Q1 2020 resulting from final pricing on shipments made prior to the end of 2019.

(1)    EBITDA is a non-IFRS measure, does not have a standardized meaning prescribed by IFRS and may not be comparable to similar terms and measures presented by other issuers. EBITDA comprises earnings before income taxes, interest expense (income), amortization expense, foreign exchange losses (gains related to financing, and other expenses, including management fees and sales commissions.

The total cost for the plant modernization and expansion was approximately US $26.6 million, which was funded by cash on hand, loans from a Turkish bank and loans from Befesa. The Befesa loans totalled US $16.85 million at both December 31, 2019 and March 31, 2020. The Befesa loans bear interest at Libor + 4.0% and mature between May and December 2022. The bank loans totalled US $6.0 million at March 31, 2020, an increase from US $2.0 million at December 31, 2019, as final payments for the plant were made in Q1. The bank loans bear interest at an average rate of 3.6% and mature in August/September 2020. The bank loans are expected to rollover into new one year bank loans.

The loans are denominated in US dollars but converted to Turkish Lira for functional accounting purposes. For presentation purposes, the equity interests are then converted to Canadian dollars. The foreign exchange loss related to the joint venture debt was C$3,012,660 ($1,476,203 at 49%). This foreign exchange loss is an unrealized loss, and largely relates to the depreciation of the Canadian dollar relative to the US dollar, from $0.75 at December 31, 2019 to $0.70 at March 31, 2020. In economic terms, all revenues are received in US dollars and these will be used to pay down the US denominated debt, so no real exchange gains/losses will be realized in US dollar terms. The accounting exchange losses relate to the debt are shown below EBITDA as a financing related cost.

The Turkish entities qualified for an investment tax credit incentive on the new plant, of which TL 77.2 million (C$16.6 million) remains as a carry-forward balance at the end of Q1 2020. Tax expense (income) shown in the income statement is a non-cash deferred tax amount.

Overall, the Company’s share of EBITDA was $0.8 million in Q1 2020 and its share of net loss was $1.2 million, driven largely by the $1.5 million unrealized foreign exchange loss recognized on the debt balances.

George A. Flach, Vice President of Exploration, P.Geo. is the Qualified Person (QP) as defined in NI 43-101 and has prepared, supervised the preparation of, and approved the scientific technical disclosure in this news release.

The Company’s Uranium Business includes six exploration permits in the Republic of Niger. Uranium mineralization has been identified on each of the permits, with the most significant discovery being the Dasa deposit situated on the Adrar Emoles 3 concession, discovered in 2010 by Global Atomic geologists through grassroots field exploration. A Mining Permit for the Dasa deposit will be applied for in H2 2020.

Global Atomic’s EAFD business holds a 49% interest in Befesa Silvermet Turkey, S.L. (“BST”) Joint Venture, which operates a processing facility, located in Iskenderun, Turkey, that converts Electric Arc Furnace Dust (“EAFD”) into a high-grade zinc oxide concentrate which is sold to zinc smelters around the world. The Company’s joint venture partner, Befesa Zinc S.A.U., a wholly-owned subsidiary of Befesa, S.A. (“Befesa” listed on the Frankfurt exchange under ‘BFSA’), holds a 51% interest in and is the operator of the BST joint venture. Befesa is a market leader in EAFD recycling, capturing approximately 50% of the European EAFD market, with facilities located throughout Europe and Asia.

The information in this release may contain forward-looking information under applicable securities laws. Forward-looking information includes, but is not limited to, statements with respect to completion of any financings; Global Atomic’s development potential and timetable of its operating, development and exploration assets; Global Atomic’s ability to raise additional funds necessary; the future price of uranium; the estimation of mineral reserves and mineral resources; conclusions of economic evaluation; the realization of mineral reserve estimates; the timing and amount of estimated future production, development and exploration; costs of future activities; capital and operating expenditures; success of exploration activities; mining or processing issues; currency exchange rates; government regulation of mining operations; and environmental and permitting risks. Generally, forward-looking statements can be identified by the use of forward-looking terminology such as “plans”, “targets”, “expects” or “does not expect”, “is expected”, “budget”, “scheduled”, “estimates”, “forecasts”, “intends”, “anticipates” or “does not anticipate”, or “believes”, or variations of such words and phrases or statements that certain actions, events or results “may”, “could”, “would”, “might” or “will be taken”, “occur” or “be achieved”. All information contained in this news release, other than statements of current and historical fact, is forward looking information. Forward-looking statements are subject to known and unknown risks, uncertainties and other factors that may cause the actual results, level of activity, performance or achievements of Global Atomic to be materially different from those expressed or implied by such forward-looking statements, including but not limited to those risks described in the annual information form of Global Atomic and in its public documents filed on SEDAR from time to time.

The Toronto Stock Exchange has not reviewed and does not accept responsibility for the adequacy or accuracy of this release.

Inside Housing – Insight – Grenfell Tower Inquiry: what to look out for over the coming weeks