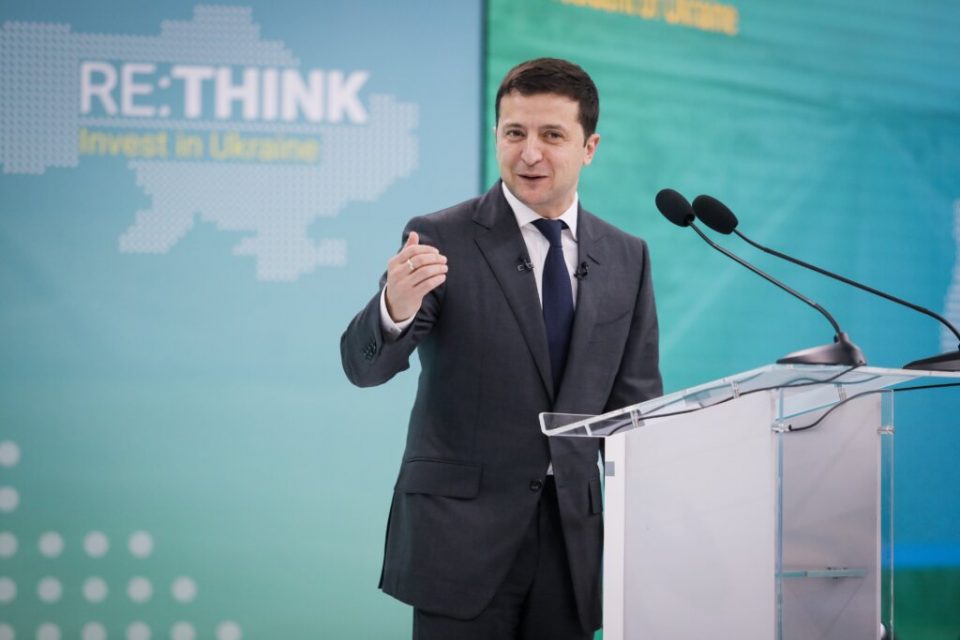 The title of this opinion piece would make a good comedy episode in a Quartal 95 series if it weren’t so tragic.  Earlier this month, the president visited the Malyshev military plant, one of UkrOboronProm’s 130 companies, and he was shocked by what he saw. The plant, which had been producing 900 tanks annually for the Soviets, had produced only one tank in the last 10 years.  Some workers had not been paid in four years while others were paid at merely subsistence levels and often required to work in freezing conditions.

In the meantime, back in Kyiv, Andriy Bohdan, the president’s chief of staff, told the Kyiv Post: “I want Ukraine to be a normal country.”

But Ukraine is one of the poorest countries in the world and ranks low in a variety of economic, political, social, poverty, fiscal, and labor measures.

As a result, Ukrainian confidence in their government (prior to the recent elections) was in the single digits.

Yet Bohdan reassured the Kyiv Post that his aim is to pass legislation that will improve everyone’s confidence, lower the interest rate for borrowing, and provide funds for public works projects. What remains a mystery is how the enactment of laws and public works projects would rid the country of baleful oligarchic domination of the economy and their close collaboration with the ruling establishment; the patronage, corruption and inefficiency; the draining of the budget by state enterprises to enrich their controlling interests; monopolistic practices and suppression of competition; regulatory decisions serving dominant business interests; a corrupt judiciary and an oversized, poorly managed civil service; a 40% shadow economy depriving the government of tens of billions in revenue.

How can Ukraine ever be a “normal” country without getting down into the trenches and among the weeds of every governmental institution to “search and destroy” all vestiges of a corrupt and bloated “system” that has kept a highly talented and educated nation and a rich land from its great potential?

Zelensky claims that he is committed to doing the best he can to leave Ukraine better off than when he assumed office, and the nation entrusted him with more power than any of his predecessors. If he fails, he will have no excuse for failure, other than his own faintness of heart and inexperience. But enacting more laws and instructing his ministers to show tangible results in three months is not the answer. It is simply window dressing.

Laws require compliance and enforcement, and those who break or skirt those laws must be found and sanctioned. What about the workers at the tank factory who have not received any salary for years, or those working at subsistence salaries under unhealthy conditions?

Had the president not visited the site, what law would have found and redressed its waste and abuse of human “capital” and idled fabrication capability required by a nation at war?

How many more pockets of waste, abuse, and discontent are there throughout Ukraine and how can they be found?

Who is responsible for finding and remedying them?

And even if some egregious issue of abuse or waste or criminal conduct does rise to the attention of media and investigators, how many others do not and will not?

There is an answer to all this. It is not cheap nor is it easy to implement. But, once it is established and takes root it will pay for itself many times over by detecting and squeezing out opportunities for corruption, greatly reducing waste of taxpayer money, facilitating competition, encouraging investment, exposing some parts of  the shadow economy, restoring merit and professionalism to the civil service, and enhancing public confidence in governmental institutions. It is the Office of Inspector General, much in the news these days, that has been the primary and highly effective means of ensuring integrity, transparency, and accountability in U.S. federal and state agencies.

Almost all federal agencies have such an office that is staffed with auditors, investigators, (occasionally) lawyers and support staff.  Small agencies with small budgets may have as few as 2-3 employees while large agencies with large budgets and very complex operations and structures may have several dozens or hundreds of employees.

These offices become very familiar with the agencies to which they are assigned; schedule priorities based on what they consider to be the most vulnerable areas; conduct inspections; interview management and staff; review records; prepare surveys; determine whether the agency and its employees comply with lawful requirements and professional standards; and urge agency employees to report instances of waste, fraud, criminal conduct or abuse without fear of disclosure.

Although they have limited “investigative” and no prosecutorial authority, they are obliged to refer cases of unlawful conduct for prosecution. In addition – in cases of waste or abuse –  they are obliged to provide written reports of their findings to the president and Congress after they first consult with the agency head and agree on a planned remedy. Managers who had not caused or been aware of the problems are generally ready to cooperate with the Inspector General in remedying them.

Bohdan had concluded that solutions to the host of problems required in making Ukraine a “normal country” are “complicated.”

And, indeed, they are if viewed in their entirety.

The challenge is elephantine, but an “elephant” is “eaten” one bite at a time.

Ideally, a coordinating Office of Inspector General could be established at the level of the president and prime minister, which could then help draft the appropriate legislation, develop training programs, determine skill requirements and budgetary needs, recruit a small cadre of staffers who, in turn, would be able to spread out to the agencies and replicate the original model.  These offices must be financed separately from the agency and they must be free and independent to do heir work without interference or influence – including that of agency management and heads.

George Woloshyn is a retired senior executive and Senate-confirmed presidential appointee in the Reagan Administration. He had served as head of government-wide civilian personnel security, national security emergency preparedness, and as inspector general of a regulatory agency. He has also been active in philanthropic programs involving Ukraine.

A New Kind of Connected Factory