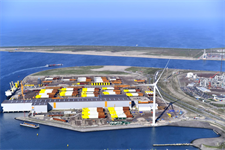 GE is reportedly in talks to set up a factory in the UK to supply turbines for the 2400MW Dogger Bank A & B Dogger Bank A & B (2400MW) Offshoreoff Yorkshire, UK, Europe Click to see full details offshore wind farm and future projects.

It is understood that three sites – Rosyth in Scotland, and Humberside and Tees Valley in England – are vying for a GE factory, in a deal that would create 3,000 green jobs in previously industrial areas while supplying the UK’s offshore wind farms.

Wind industry officials are expected to meet government representatives next week to thrash out the details of the GE decision, as well as for renewable technology supply chains, according to the Financial Times.

It would be the first major investment in offshore wind turbine manufacturing in the UK for five years.

GE made the first prototypes of its Haliade-X model in France, but appears to be planning future production in the UK.

The US manufacturer is due to supply the uprated 13MW version of its Haliade-X machine for SSE and Equinor’s Dogger Bank project off north-east England.

The manufacturer would likely also be eyeing future projects in the UK, which has ambitious plans for offshore wind.

The UK already leads the world for offshore wind capacity and its fleet is due to grow, with the Conservative government this week reiterating a 40GW target by 2030.

This week, the government announced a ten-point plan for a “green industrial revolution”, with a £12 billion (€13.3 billion) of government investment in offshore wind, hydrogen, nuclear, electrical vehicles and energy transition key sectors.