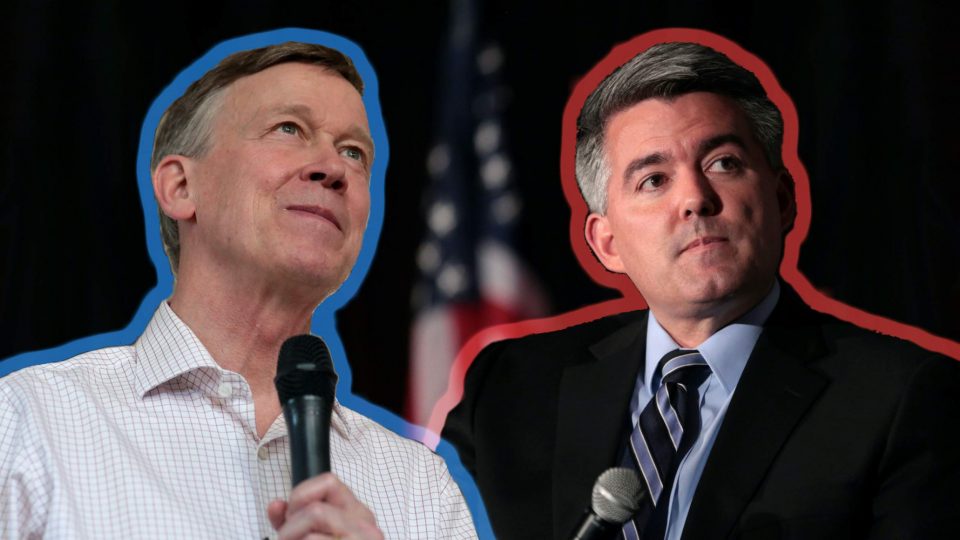 In their third debate, John Hickenlooper and Cory Gardner sparred over a number of national issues while issues more central to Colorado went overlooked.

Most of the questions the U.S. Senate candidates faced Friday were centered around Washington and the federal government. The two traded frequent barbs throughout the night while still touting their reputations for bipartisanship and working with others.

The debate, moderated by The Denver Post, Colorado Public Radio and Denver7 (KMGH-TV), was the third time the candidates have debated on the campaign trail leading up to the Nov. 3 election.

The first national-level issue the candidates tackled was the COVID-19 pandemic. They were questioned both about the government and states’ responses to the pandemic and about the need for additional aid.

The candidates agreed that Congress needs to pass a new round of pandemic aid. The initial aid package, the CARES Act, was passed in March. Since then, several new packages have been brought forward and shot down primarily along partisan lines.

Gardner, the Republican incumbent, criticized Hickenlooper’s condemnation of one of the packages brought forth by Senate Republicans in September.

“Just a few weeks ago, we had a bill on the floor of the Senate to make sure that we had a chance to support Coloradans, to extend unemployment benefits, to allow businesses a second loan,” Gardner said. “Unfortunately, John Hickenlooper opposed that vote on the Senate floor. He would have voted no.”

That package did not have the support necessary to bring it to a full floor vote. Democrats largely spoke against it, saying it did not offer enough support to the public.

Hickenlooper, the Democratic former governor, has denounced the Senate’s failure to vote on the HEROES Act, a bill passed by the Democratic House of Representatives in May. Republicans criticized the bill as being unreasonably expensive and Senate leadership has not brought it forward for consideration.

Hickenlooper also touted his administration’s role in creating government infrastructure for disaster response when questioned about the pandemic, saying the work his office did in improving communications made a difference.

“I think we put in place the processes by which you can continually improve whatever disaster you have,” he said.

He also praised the work of his successor, Gov. Jared Polis, in responding to the pandemic. Hickenlooper cast blame on President Donald Trump for the United States’ high rate of cases compared with similar industrialized countries and said that Washington was the “same as it ever was” in its failure to pass a second relief package. Gardner is a part of that status quo, Hickenlooper said.

The candidates also clashed on the Affordable Care Act, an issue which has been raised frequently both in Colorado and in other campaigns across the country. The ACA is set to be considered by the U.S. Supreme Court in November after the election, and politicians have been lining up on opposing sides of the bill in Washington.

Gardner does not support the ACA and has voted several times to repeal it. He said he supports a “patient-centered plan” to replace it. He also touted his work in pushing for a reinsurance waiver for the state of Colorado that was intended to drive down health care costs in the state. Gardner accused Hickenlooper of supporting a plan that would lead millions of people in Colorado and the rest of the country to lose private health insurance in favor of government-run insurance.

Gardner also said that he wants to see a plan to replace the ACA that will protect people with pre-existing conditions and pointed to legislation he introduced that is intended to preserve care for those people.

However, when Hickenlooper was questioned about the ACA, which he supports, he pointed to several fact-checks that have said Gardner’s bill will not actually offer people with pre-existing conditions the same coverage as the ACA. He has spoken in favor of expanding a public option for health care to eventually reach universal coverage in the United States.

The debate, like several other Senate debates across the country, soon turned to the president. Trump remains unpopular in Colorado, and Gardner was asked about the frequency with which he votes alongside Trump.

The votes he has cast with Trump are “because I vote 100% of the time with the people of Colorado,” Gardner said.

He cited the bills and legislation he has passed over the years as evidence. Specifically, he pointed to the Bureau of Land Management’s move to Grand Junction and the passage of the Great American Outdoors Act, among others.

Hickenlooper’s campaign has repeatedly sought to tie Gardner to Trump based on his voting record. Hickenlooper has also repeatedly condemned many of the president’s statements and actions.

Questions began to depart from their Washington focus later in the debate. The candidates discussed energy policy and whether efforts should be made to shift from oil and gas to renewable energy to confront climate change. Hickenlooper and Gardner both said humanity has an impact on the climate but differ in their plans for meeting the country’s energy needs.

Gardner has cast himself as a defender of the oil and gas industries. He said Hickenlooper’s energy plan would lead to widespread job losses for people working in fossil fuels.

Hickenlooper’s energy plan aims to move the U.S. toward carbon neutrality by 2050. He also said he wants to offer transitional assistance and new job training as jobs in the oil and gas industries decrease and there is more demand for workers in renewables.

In addition to an environmental choice, Hickenlooper said support for renewables is a wise economic one.

“Market forces are changing our energy economy,” he said. “Now all of a sudden, we have clean energy and clean air at a lower cost.”

He said there needs to be incentives in place to get people into renewable energy industries as they continue to grow.

The candidates debated a number of other issues during the 1½-hour debate. They clashed on topics, including U.S. Supreme Court appointments, negative campaign tactics and ethics in office.

Both candidates pointed to their records advocating for their constituents as evidence for why they were the best choice to be sent to Washington.

The candidates will debate again Tuesday in Fort Collins for the last time before the election.

John Purcell is an intern for The Durango Herald and The Journal in Cortez and a student at American University in Washington, D.C.