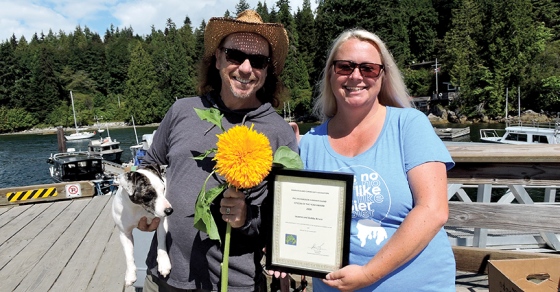 Since the pandemic hit in March, Leanne and Bobby Bruce have been coordinating a grocery supply chain to get sundries to Gambier Island, while Paco Cauley used his boat to help residents get garbage to a collection site at Langdale.

The volunteers were honoured for their efforts with the Phil Richardson Citizen of the Year award from the Gambier Island Community Association (GICA) late August.

GICA president Danny Tryon said their efforts symbolize a larger story about the community’s joint effort to reduce the spread of COVID-19 by preventing the need to commute to the Sunshine Coast mainland.

A similar operation was also initiated for Keats Island residents.

Leanne Bruce said the award “has to be shared” with their regular team of volunteers: Terry Hall, Estelle and Nola Honeywell, Joley Switzer and Mike Wyness.

Tryon said other Gambier volunteers were involved in helping move boxes and deliver them to neighbours.

Leanne Bruce told Coast Reporter they were surprised to learn they would be honoured.

“Islanders come from all walks of life, have many different points of view, but when things get tough we know that the only people that we can count on are our neighbours. Fire, storms, snow, pandemic – we hunker down, but when the call goes out for help, we all answer.”

Coronavirus; the growing threat to the global pharmaceutical supply chain