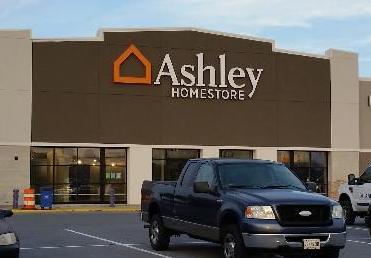 The former Babies R Us store, which closed more than a year ago, has a new tenant, Ashley HomeStore.

The store at 990 Plaza Blvd., next to Harrisburg Pike, is expected to open by Thanksgiving with about 50 employees, according to franchisee Regency Furniture.

The company, based in Arcadia, Wisconsin, was founded in 1945. Started as a furniture supplier and manufacturer, Ashley opened its first store in 1997. It now has more than 1,000.

Ashley describes itself as “the No. 1 selling furniture store brand in the world and the No. 1 retailer of furniture and bedding in the United States.”

Its 19,000-square-foot local store is next to the Bonefish Grill restaurant. It’s in a small row of stores next to a stand-alone Olive Garden restaurant.

The stores and restaurants are part of Park City, though separated from the main mall by Plaza Boulevard.

Ashley’s space originally was a Weis Markets supermarket. In 1991, retailer Toys R Us put a Kids R Us store there, then changed the concept in 2004 to Babies R Us.

The local Babies R Us and the local Toys R Us, a quarter-mile away at 1430 Harrisburg Pike, both closed in June 2018 as the once-thriving chain went through bankruptcy liquidation.

Regency Furniture, based in Brandywine, Maryland, has nine stores under the Regency banner, all in Maryland or Virginia. Regency also owns 28 Ashley stores, including those in York, Harrisburg and Mechanicsburg.


Color Me Mine opens ceramics studio at Park City Center


EVO 206 Coffee Co. opens in Elizabethtown at The Hub on Market