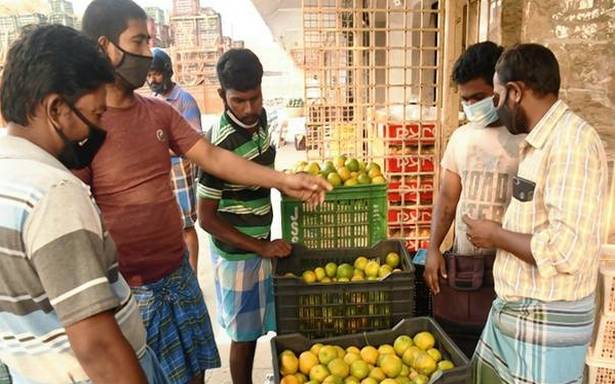 Retailers will be allowed to visit the market from midnight to 9 a.m.

After nearly seven months, most fruit semi-wholesalers vacated from the Madhavaram market, which served as their temporary trade premises, and prepared to return to the Koyambedu market on Saturday.

As the Tamil Nadu government allowed them to reopen shops on Sunday evening, fruit semi-wholesalers finished their last-day sales at Madhavaram on Saturday morning.

Traders said only 30 truckloads of fruits arrived at Madhavaram on Saturday as against the usual 100 trucks.

About 10 truckloads of stocks were transported to Koyambedu to facilitate the reopening of the market.

Fruit wholesalers were allowed to reopen 120 shops in Koyambedu from November 1.

Members of the Federation of All Koyambedu Fruit Merchants Associations said that a function had been arranged at the market at 7 p.m. on Sunday to mark the reopening of 700 semi-wholesale shops.

S. Srinivasan, one of the coordinators of the federation, said while unloading of goods would be permitted from 7 p.m. to midnight, retailers could visit the market for purchase from midnight to 9 a.m.

Wholesale and semi-wholesale trade on the same premises would help to stabilise the prices.

“We also urged the government not to allow wholesale trade at various places without licence as this would affect trade at Koyambedu and lead to issues like traffic congestion,” he said.