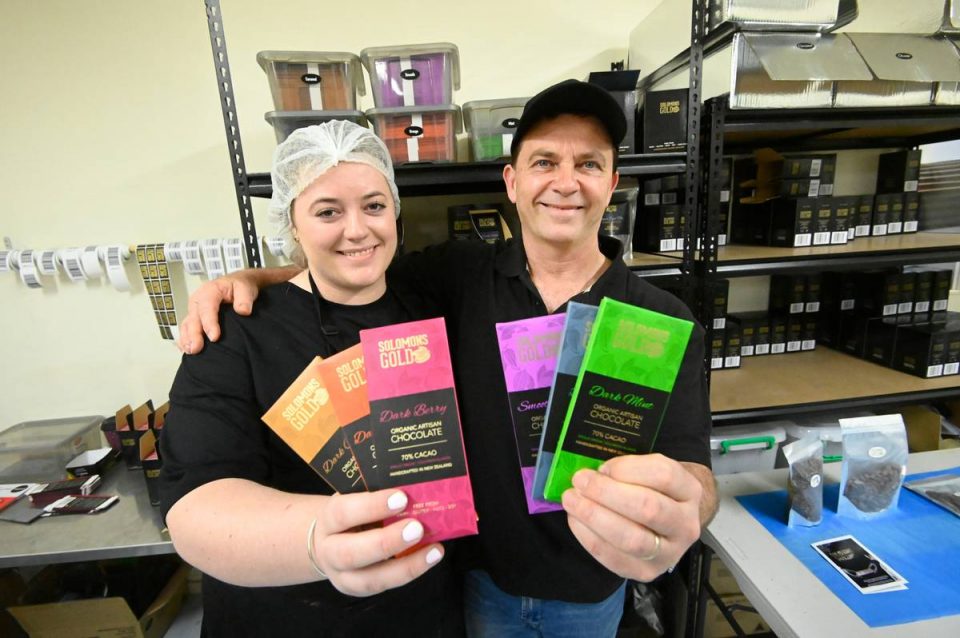 Organically grown in the Solomon Islands, the beans from Solomons Gold chocolate are shipped to a small chocolate factory in the Mount where every step of the bean-to-bar process in completed by hand. Zoe Hunter tours the chocolate factory.

Ten tonnes of organic chocolate beans are shipped from the Solomon Islands to a small chocolate factory in Mount Maunganui every six months.

There, hundreds of chocolate bars are completely handcrafted from bean to bar each day.

Glenn Yeatman came to New Zealand with his family as a refugee from Zimbabwe about 20 years ago.

After being invited to the Solomon Islands to work on a cocoa plantation, he moved back to Aotearoa to start his own chocolate factory in the beachside suburb of Mount Maunganui.

The small chocolate factory on Macrae Ave now stocks its bean-to-bar dark artisan chocolate at more than 70 stores nationwide and in Australia.

Yeatman said the chocolate is made from single-origin cacao beans, which means they are grown from a single farm or region.

From the cacao farms to grading facility in the Solomon Islands capital of Honiara, Guadalcanal, only the finest chocolate grade cacao beans are hand-selected and dried, he said.

Yeatman said about 10 tonnes of beans are shipped to the factory every six months.

The cacao is then roasted, cracked, winnowed, conched and tempered in small batched using their own traditional artisan techniques.

Yeatman said they also leave in the cacao butter from the same beans the chocolate is made with.

“That’s what makes it so smooth.”

The tempering process is a tricky one that requires a lot of concentration by Andrea King, who is Yeatman’s daughter.

“If the chocolate is not tempered properly the consistency becomes like a fudge. It means the structure hasn’t formed.”

They have since invested in a new machine that can temper the chocolate faster than the manual machine.

“This new one is the Ferrari of tempering machines,” King said. “What the other machines can do in a day is what this machine can do in an hour.”

That’s 60kg of chocolate tempered in just one hour.

Yeatman said the chocolate contains only organic ingredients, is gluten, dairy, nut and soy free and has seven times more antioxidants than spinach.

“It’s what we don’t put into our chocolate that makes it special … You’re eating the chocolate for the cacao not for the sugar.”

Yeatman said it takes about 200 hours from bean to bar.

The chocolate was awarded a silver medal at the Academy of Chocolate Awards in 2017 and a bronze and silver medal in 2018.

Yeatman ran a coffee plantation in Zimbabwe for years before he said his family was basically kicked out about 20 years ago.

“We basically came here as refugees … That’s why we moved the family here. It’s the best thing we ever did.”

He believed due to his experience in coffee, he was asked to help manage the cocoa plantations in the Solomon Islands where he became the general manager for Commodity Corp (C-Corp).

“Coffee is fantastic but chocolate is mindblowing. It is so diverse,” he said.

“Chocolate makes you smile. It is a positive thing.”

Yeatman moved from the Solomon Islands to Tauranga in 2013.

“I took some of the beans back and made the first Solomons Gold.”

He still has that chocolate in the factory today.

“I told my boss [C-Corp chief executive Clive Carroll] I will build a chocolate factory as long as it is in Tauranga. We have family here.

“It was basically trial and error at the beginning.”

The chocolate is now sold at more than 70 stores nationwide and in Australia.

The factory is run by a small team of five staff, including King.

King, 26, said she loved her job and working with her father.

“I have always been obsessed with chocolate ever since I was little,” she said.

“But I just love working with chocolate. It is always a joy.”

She also loved the family aspect of the business and the fact everything was made fair-trade.

“Everything is done consciously.”

King moved to New Zealand at the age of 8 or 9 after growing up on her father’s coffee plantation in Zimbabwe.

The big dream, Yeatman said, was to stay local.

“We want to be a local destination for people to come and experience the bean-to-bar cafe and taking the chocolate to the next level.”

Since the beginning, the social enterprise has focused on 100 per cent sustainability and was a zero waste business to benefit the future generations of people living on the Solomon Islands.

Yeatman said they were commitment to improving the Solomon Island communities’ standard of living by fair trade including paying premium for their beans, fair wages, workers rights, gender equality and child-free labour.

“We are putting Solomon Islands on the map. Everywhere the chocolate goes, the story goes with it.”