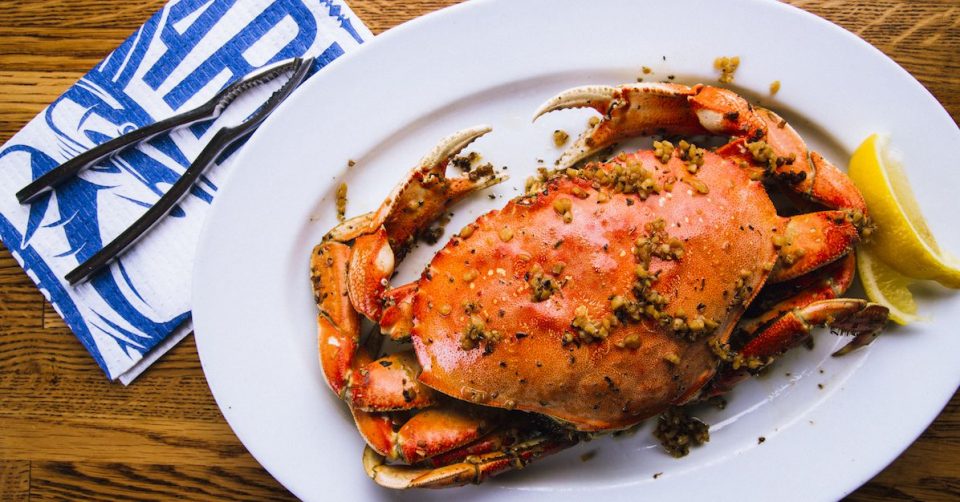 In cracking good news, the commercial Dungeness crab season finally kicks off in the Bay Area this week, after months of delays. After a standoff on pricing was resolved, fishermen are dropping their crab pots today and will pull them up on Wednesday. That means that diners can expect local, fresh crab in markets and on menus by this weekend.

Crab season legally opened on December 23, after over a month of delays intended to protect whales that were swimming too close to shore. But then negotiations between fleets and seafood wholesalers stalled, with the fishermen refusing to go out on the water until a price agreement could be reached. As first reported by the SF Chronicle, that resolution was reached late Friday, which is good news for an industry still reeling from the pandemic and a devastating fire.

Many fishermen contend that one big wholesaler, Pacific Seafood, was responsible for the delay. According to local crabbers, Pacific initially offered $2.25 per pound, while local fishermen sought more than $3. After weeks of negotiations, they ultimately agreed on $2.75, according to Porter McHenry, president of the Half Moon Bay Marketing Association, as quoted in the San Mateo Daily Journal.

Fishermen started dropping their pots at 8 a.m. on Monday, January 11, according to a statement from the Half Moon Bay Marketing Association, as reported by the Bay Area News Group. But they’re not going to start pulling up until 8 a.m. on Wednesday, January 13, as per a gentlemen’s agreement between the fishermen in San Francisco, Bodega Bay, Half Moon Bay, Vallejo, Santa Cruz, and Moss Landing. That “presoak” of two days was intended to avoid what’s known as a “shotgun start,” with fishermen racing out to sea even during unsafe conditions.

But the weather looks good, so fresh Dungeness crab should arrive at wholesalers as early as Wednesday afternoon, and arrive at markets and restaurants as early as Thursday morning, which means that its inclusion on weekend menus is likely. Of course, there are no guarantees with a wild ingredient, and expected natural cycles mean that fishermen aren’t planning on a big haul this year. But Tom Worthington, the co-owner of local fish market Monterey Fish Co., confirms to Eater SF that plans to unload are already underway.

Still, waiting to start the season in January was devastating for small local fishermen, who completely missed Thanksgiving, Christmas, and New Year’s, losing that small but special market for live crab during the holidays. “It’s super frustrating,” Heather Sears, captain of the Princess out of Fort Bragg, told Eater SF only last week. “The public just wants crabs, and we as fishermen just want to produce crabs, especially for the holiday market, which is the most lucrative live market of the year … but at this point, the whole season might be a write-off.”

And given the ongoing lockdown, and how many restaurants are temporarily closed or limited to takeout, the dining industry won’t be buying as much live crab as usual. “We’re not sure how quickly restaurants will jump on it, given that there’s not an opportunity to do much,” Worthington says. He sent out emails to all of his restaurant accounts, and will know more in a couple of days, but isn’t expecting big bites.

“This first wave is going to be all retail,” Worthington says, which could be good news for home crab cooks: he predicts the opening price for fresh crab in markets should be very affordable, in the range of $8.95 per pound. But while that’s heartwarming news for crab eaters, who might be happy to tie on a bib and get cracking at home, it’s still a tough break for small local fishermen, who now more than ever need every dollar they can get.

Rethinking the bottle: could plastic, cans and kegs be greener?