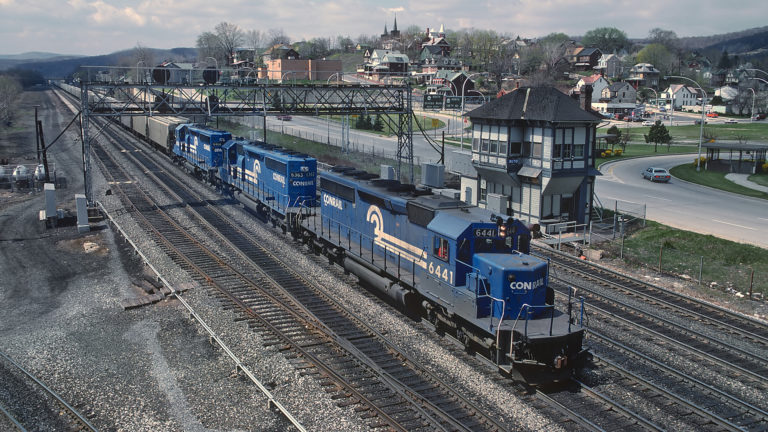 FreightWaves Classics articles look at various aspects of the transportation industry’s history. If there are topics that you think would be of interest, please send them to fwclassics@freightwaves.com

The many industries that make up the world of freight have undergone tremendous change over the past several decades. Each week, FreightWaves explores the archives of American Shipper’s nearly 70-year-old collection of shipping and maritime publications to showcase interesting freight stories of long ago.

The following is an excerpt from the July 1998 edition of American Shipper (pages 71-72).

Conrail deal is OK’d, with conditions

The Surface Transportation Board (STB) has approved the division of Conrail between Norfolk Southern (NS) and CSX, which will be left in control of most railroad traffic in the eastern half of the United States.

The last big U.S. railroad merger – Union Pacific’s (UP) acquisition of Southern Pacific in 1996 – resulted in a service breakdown from which UP and its customers still haven’t recovered.

NS, CSX and the STB say they’re determined to avoid a repeat of the UP fiasco. To ensure that service is maintained and competition prevails, the STB imposed numerous requirements that NS and CSX must meet as they graft parts of the Conrail system onto theirs.

Though the conditions were more than originally anticipated by NS and CSX when they agreed to buy Conrail for $10.2 million, both NS and CSX said they could live with the requirements.

“Had they gone any further, we would have been forced to question going forward with the transaction,” said John Snow, chief executive officer of CSX Corp.

But he said the final agreement is acceptable and that the prospect of head-to-head competition by CSX and NS will make this “the most competitive merger in rail history.”

In most of Conrail’s territory in the Northeast, shippers will enjoy increased competition.

Norfolk Southern will acquire 58% of Conrail, with CSX taking on the rest.

CSX will become the nation’s third-largest railroad, behind UP and Burlington Northern Santa Fe, with 23,100 miles of track. Norfolk Southern will be fourth-largest, with 21,400 miles.

In approving the Conrail breakup, the STB expanded the conditions to which NS and CSX had previously agreed in talks with the National Industrial Transportation League and other shipper groups.

The STB extended from three years to five years the period under which NS and CSX will remain under government oversight. The longer period was requested by chemicals and plastics shippers, whose Texas and Louisiana operations have been disrupted by UP’s service problems.

The board imposed a $250-per-railcar cap on charges for reciprocal switching between NS and CSX on the former Conrail system. The cap will apply to interchange points at Philadelphia, Detroit, Buffalo, New York and in New Jersey.

Some Conrail customers have been paying as much as $400 for switching between Conrail and other railroads.

The board said that if CSX and NS want to take over Conrail’s existing transportation contracts with shippers, they must do so within six months. The railroads had hoped for an indefinite period.

“By giving shippers the opportunity to be released from their contracts after six months this will give many shippers a chance to take advantage of their new competitive options sooner rather than later,” said Linda Morgan, the STB’s chairman.

NS and CSX will have to provide a series of confidential weekly and monthly reports to the STB.

Competing carriers won concessions from NS and CSX. For example, APL Ltd., which competes with CSX in both ocean and stack-train services, won a provision that will prohibit CSX Transportation from disclosing transportation contract information to Sea-Land or CSX Intermodal, which are owned by CSX Corp.

NS had hoped to get the merger off the ground by September 1, but that date is expected to be pushed back.

Mindful to the problems that Union Pacific encountered, CSX said it will operate with 120% of the manpower needed to assure “a safe and efficient integration process.”

CSX will add 1,500 new train and engine employees, and will acquire 190 new locomotives in addition to the 99 it has purchased this year. Snow said CSX will invest almost $500 million in capital improvements on its portion of the Conrail system.

NS will add about 1,000 new train engine employees, and will purchase 116 new locomotives this year. NS will also buy 1,000 locomotives from Conrail. NS will invest more than $700 million in construction and improvement projects.

The carriers pledged a safe and smooth implementation without services disruptions.

“The key is to make sure we have done the advance planning to make the merger run smoothly,” said David Goode, chief executive of Norfolk Southern.

Both Norfolk Southern and CSX predict lower freight rates resulting from increased competition between the railroads and between railroads and trucks.

Norfolk Southern predicts that by shifting traffic from truck to rail, the merger will eliminate more than a million truck trips a year on eastern and midwestern highways. CSX has made similar predictions.

“The merger benefits are unprecedented,” Snow said. The carriers heeded the STB’s advice to work issues out with shippers, labor and other parties, Snow said. “We’ve engaged in a continuous dialogue which produced many ‘win-win’ benefits.”

FreightWaves Classics: Victory Express thrived under ICC and beyond

FreightWaves Classics: the ICC and its impact on trucking

SAVE FOODS SIGNS LETTER OF INTENT WITH PLANETAGRO FOR DISTRIBUTION OF ITS PRODUCTS ACROSS MEXICO OTC Markets:SAFO

Frenemies: air cargo should embrace its freight cousins, not passengers

Its significance in times of farmer struggles

How Can Seattle Lead the Way to a More Inclusive Running Industry?