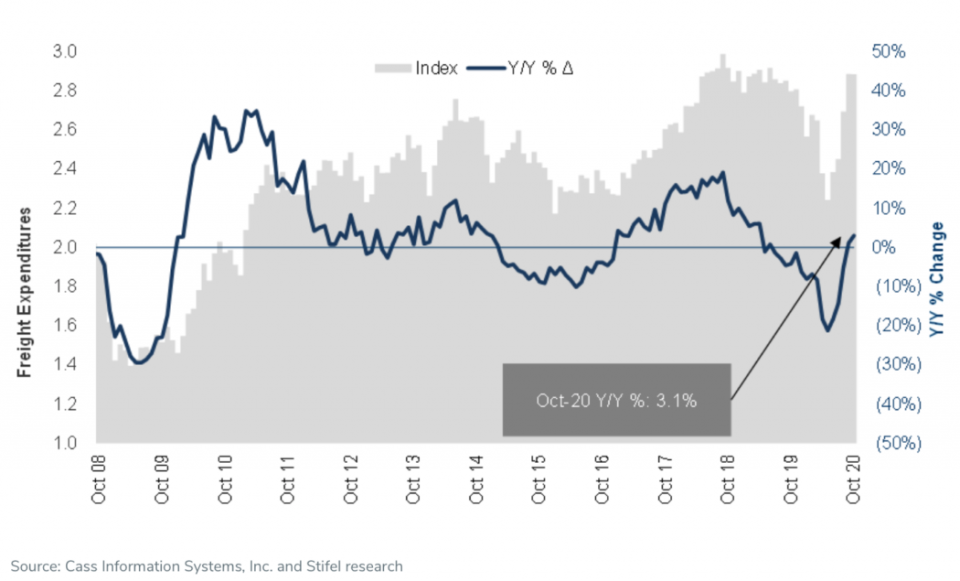 That progress marked the best growth since October 2018. And while Cass’ raw index number rose only slightly from September’s level at 0.3% up, it was the still the highest reading since September 2019, and 27.8% above April’s low point.

Better still for carriers, the trend shows no signs of slowing down. “We should see this continue through year-end, assuming current freight trends continue, even with normal seasonal softening month to month. Inventories remain quite lean,” report author David Ross, the managing director and group head of Stifel’s Global Transportation & Logistics Equity Research practice, said in a release.

One of the primary drivers behind the resurgence in freight activity has been healthy consumer spending, shown by rising U.S. retail sales, the report found. Those numbers were created by a mixture of the continued reopening of the economy and businesses, schools starting back up, and optimism around promising vaccine development.

A second factor has been the hot maritime import sector, with double-digital percentage jumps in the number of containers arriving at U.S. West Coast ports, Cass said. That is triggered when large U.S. importers bring in a disproportionate amount of containers to southern California and then move it around the U.S. via truck or rail, avoiding East Coast and Gulf Coast ports because of the longer ocean transit time from Asia.

For example, the Port of Los Angeles on Wednesday said that October marked the busiest month in the facility’s 114-year history. Propelled by replenishment of inventories and retailers preparing for upcoming holidays, the port processed 980,729 twenty-foot equivalent units (TEUs) for the month, an increase of 27.3% compared to October 2019.

As a result, shippers are paying more to get their freight moved, Cass said, pointing to spot rates that are high and still climbing. “In freight pricing, the tight truckload market has caused spot rates to reach heights not seen in a very long time. Beware: contract rates will follow as they are renegotiated,” Ross said.

Despite the Cass report’s optimism, the Port of Los Angeles indicated that the country still has work ahead to emerge completely from the pandemic recession, and that the current resurgence of Covid-19 cases adds uncertainty to that challenge. “Overall volume has been strong yet the trade imbalance remains a concern,” Port of Los Angeles Executive Director Gene Seroka said in a release. “For every three and a half containers that are imported into Los Angeles from abroad, only one container leaves filled with U.S. exports. One-way trade will not put Americans back to work and it adds logistical challenges to the supply chain.”

Propelled by replenishment of inventories and retailers preparing for upcoming holidays, October marked the busiest month in the Port of Los Angeles’ 114-year history. Year to date, overall cargo volumes lag by 5.3% compared to 2019. https://t.co/nNiCbP58Bg pic.twitter.com/mnjvU9FB47

Freight companies ‘on their knees’ during pandemic