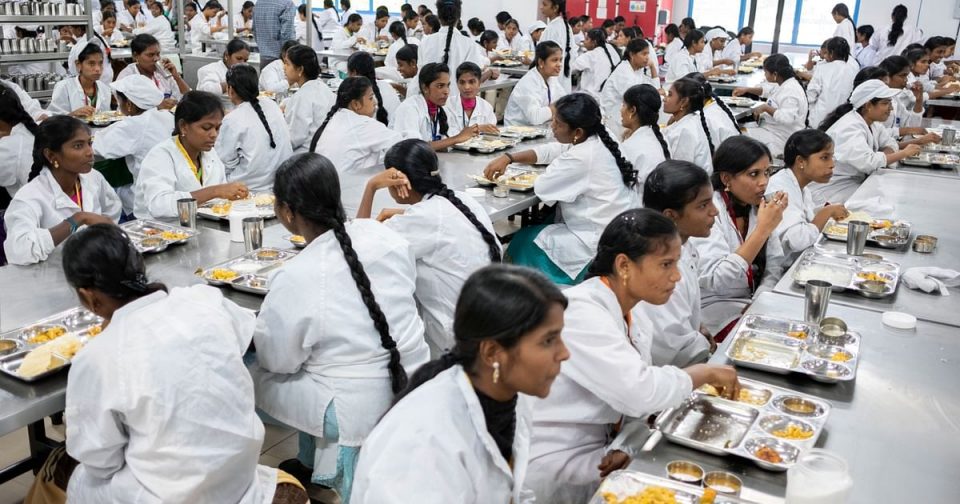 The industrial town of Sriperumbudur, about an hour’s drive southwest of Chennai, boasts of manufacturing facilities operated by Indian units of Hyundai Motor Co., Saint-Gobain, SA Daimler Group, Renault-Nissan, and Lenovo Group, among others.

The bulk of Foxconn’s contractual workers are from neighbouring districts. Education levels, like the rest of Tamil Nadu, are better because of the state’s liberal funding policies. Yet, lack of jobs means they are willing to take up low-skilled work.

On Dec. 20, scores of people blocked highways after about 250 women working at the iPhone factory fell sick. More than 159 were hospitalised. The company’s silence amplified the anger as local labour unions mobilised support.

Even after the workers fell sick, Foxconn or its contractors didn’t inform anyone that they were shifted to the primary health centre and then to a multi-specialty hospital in the city, said a member of the Centre of Indian Trade Unions. He spoke anonymously to avoid revealing the identify of women he helped.

They often found worms, insects and even safety pins in canteen food, said a 21-year-old who was among those who took ill. She stayed in a dormitory at International Maritime Academy in Puduchatram village of Tiruvallur district. But they didn’t complain out of fear of losing jobs, she said.

Venpa Staffing Services Pvt., the operator of the dorm, wasn’t reachable over the phone. Queries emailed to the company’s ID available with the Ministry of Corporate Affairs database didn’t elicit a response.

At another hostel in nearby Oragadam, as many as 25 women lived in a room that should accommodate only five, said a 23-year-old woman who stayed there. The water was supplied only for an hour and a half and there were no dustbins, she said. Housekeeping staff cleaned up the dorm once in three days, she said.

Workers said Gaia Consulting and Solutions Pvt. was partly managing for the Oragadam hostel. The contractor didn’t respond to queries.

The women endured this for salaries that would barely help a family survive.

The Sriperumbudur factory assembles 10,000 iPhones each in three shifts. The contract employees were paid Rs 10,273 and received Rs 8,847 after deductions every month. At least according to two payslips reviewed by BloombergQuint.

Some of the workers alleged that the company paid Rs 16,000-20,000 but about half that amount was credited to their accounts.

Phone calls and emailed queries to Gaia Consulting and Solutions, the contractor that hired the two women, went unanswered.

Local activists and lawyers said it was the absence of a union that left Foxconn workers vulnerable to exploitation.

“Employers are increasingly resorting to hiring contract labourers because they want to avoid responsibility; and evade statutory obligations as specified by the different labour laws,” said Ramapriya Gopalakrishnan, a Chennai-based advocate who takes up labour issues. “They should be accountable for contractual labour as well, especially when they are part of an international supply chain.”

Collective bargaining would help workers get fair wages, according to Gopalakrishnan. “Since 2008, we have witnessed several labour protests as many companies do not grant recognition to representative unions. This is a pertinent issue. Representative unions need to be respected and recognized by employers.”

Talking Supply Chain Podcast: How to make your team the GOAT

‘Factory of the future’ offers new blueprint for manufacturers